Doubling Down on Novavax

Two months ago, I noted that the biotech research company Novavax (NSDQ: NVAX) was skyrocketing in value. Novavax has a COVID-19 vaccine candidate completing Phase 2 of its trial process that appears quite promising.

At that time, I suggested an unconventional trade that has performed extremely well. If you missed out on that one, further below I’ll show you another opportunity to profit from this stock’s extreme volatility.

On May 15, I recommended a long straddle on Novavax. A long straddle is an aggressive options strategy. It makes money if the price of the underlying security makes a big move one way or the other. That day, NVAX closed below $44.

Specifically, I suggested buying the $42 call option and the $42 put option expiring on July 17. The total premium cost for buying both options at that time was $11.

My reasoning was that if the trial was successful then NVAX would soar. But if the trial failed, the stock could fall through the floor. The trial is not yet over. Even so, Novavax has more than doubled in value since then. 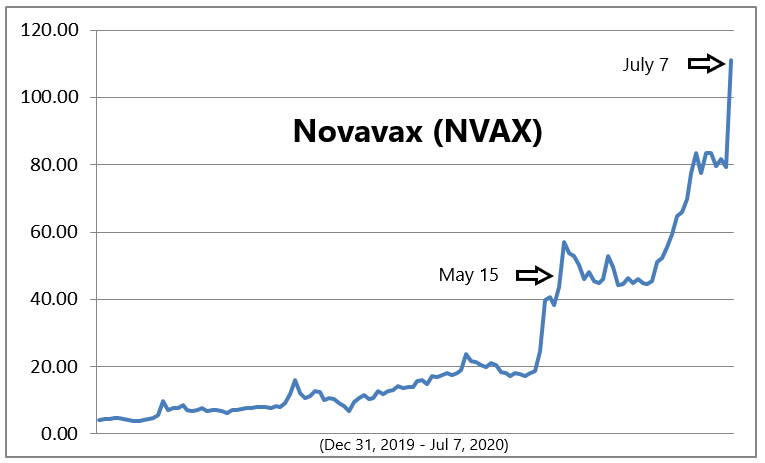 On July 7, NVAX traded above $111 after announcing it was awarded $1.6 billion by Operation Warp Speed. This money is to be used to facilitate mass production and distribution of the vaccine. Of course, that assumes it successfully completes the final phase of its trial later this year (more about that in a moment).

That works out to a 500%+ net gain on my straddle in just eight weeks!

Sell on the News

Now that Novavax has more than doubled in value, would I make the same trade again? No, I would not. The huge move I was expecting two months ago has happened.

If Novavax successfully makes it through Phase 3 of the trial then its share price may jump again. But what if Novavax hits a roadblock with its COVID-19 vaccine candidate?

Suppose the Phase 3 trial result is inconclusive or negative. In that case, its share price could quickly drop by half or more. Keep in mind, NVAX was trading below $50 less than a month ago and began the year below $5.

For that reason, the options recommendation I would make now for NVAX is different from the one I made two months ago. I would not buy a call option this time to complete the straddle.

Instead, I would only buy the put option that expires on December 18 at the $100 strike price. Earlier this week, that option could be bought for $30.

That means NVAX would have to fall below $70 for this trade to be profitable. If I’m wrong and NVAX remains above $100 through the end of this year, this option would be worthless.

In short, what I am doing is taking about half of my profit from the first trade and reinvesting it back into the second trade. Even if this trade is a bust I will still have more than doubled my money on Novavax.

If my hunch proves correct, I could make a lot more money from Novavax. Don’t get me wrong, I’d love for someone to come up with a vaccine for COVID-19. I just think that Novavax has become overvalued and at risk of a big drop if there is an unexpected glitch during its trial.

Ever since the onset of the coronavirus pandemic, money has become increasingly concentrated in a small number of momentum stocks. That has driven up their valuations to very high levels that are not sustainable.

Read This Story: Get Ready for The Stock Market Bubble to Pop

Sooner or later, many of those stocks will have their day of reckoning. There are two ways to make big money when the stock market is on the precipice of a major correction. One way is to buy put options on overvalued companies, as I have described above.

The other way is to start buying into under-followed stocks that are about to take off. And one group of stocks that appears to be getting ready to do just that is the legal marijuana industry.

The legalization of marijuana is a social, political and financial revolution that’s making early investors rich. But in the fickle marijuana sector, careful stock selection is all the more important. This year and beyond, the winners in the marijuana sector will boast prudent management and solid balance sheets, particularly biotechs with proven or promising products.