I’ll never forget my amazement the first time I heard a recording of Jimi Hendrix playing the American National Anthem at Woodstock in 1969. Partly intended as an anti-war protest, Hendrix played a psychedelic version of the Star Spangled Banner on a screeching Fender Stratocaster that mimicked the sounds of bombs exploding, combat jets diving, and machine guns firing. It was an iconic cultural moment.

Cue Hendrix’s National Anthem, because another cultural moment just occurred, in the nation’s capital and over the July Fourth weekend, and it involves psychedelic drugs.

Activists have been striving for months to get enough signatures to qualify a measure for the November ballot to decriminalize psychedelics in Washington, D.C. They just succeeded, providing a tailwind for the nationwide movement to bring psychedelics to the consumer masses.

Investors who seek “the next big thing” should sit up and take notice. Prominent among these psychedelic substances are psilocybin fungi, the “magic mushrooms” of 1960s lore. These mushrooms aren’t just for getting high. They’re increasingly coveted by consumers and medical professionals for their psychological and physical benefits.

Organizers of the ballot initiative submitted enough signatures from D.C. voters over the holiday weekend to beat the Monday, July 6 deadline. They accomplished this remarkable goal despite the surging coronavirus pandemic, street protests over police brutality, and stay-at-home lockdowns.

With the assistance of allies flown into Washington from across the country, psychedelics activists successfully submitted in excess of 35,000 signatures, more than enough to qualify the initiative.

The I-81 measure would apply to all natural entheogenic substances, including psilocybin, ayahuasca, ibogaine, and N-Dimethyltryptamine (DMT). An “entheogen” is a psychoactive chemical substance used in a religious, shamanic, or spiritual context that induces psychological or physiological changes.

Melissa Lavasani, chairwoman of Decriminalize Nature D.C., the organization behind the measure, said in a press release:

“Today is a milestone for D.C. The voters in our nation’s capital have made clear that they are ready to end another piece of the war on drugs and to support their neighbors who, like me, have found relief in entheogenic plant and fungi medicines.”

Elections officials now have 30 days to validate the petitions, the final step before the measure is formally certified for November’s ballot. A total of 24,712 signatures are needed to qualify the measure. Decriminalize Nature D.C. has already independently verified more than 27,000 of the collected signatures. The following tweet, posted July 4, tells the story of the campaign’s grassroots persistence: 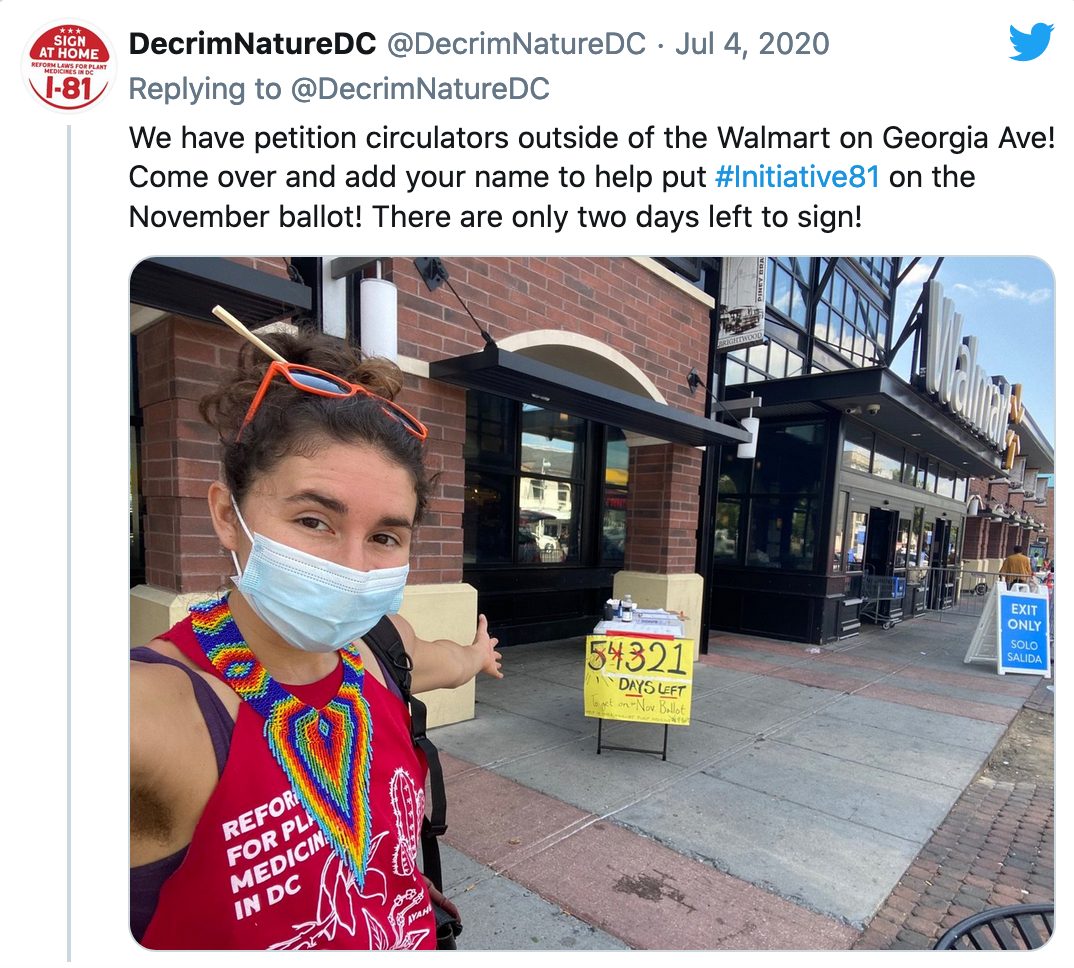 D.C. voters are embracing the idea. According to a survey released in April by campaign organizers, 59% of respondents said they supported decriminalizing psychedelics.

The campaign asserted in a statement Monday: “D.C. residents who benefit from entheogens include those suffering from mental health conditions such as depression, anxiety, and other traumas, veterans suffering from post-traumatic stress disorder (PTSD), and patients in end-of-life care.”

We’re witnessing a national movement. Denver, Colorado last year became the first jurisdiction in the U.S. to decriminalize psilocybin fungi. The historic legal change enacted on May 7, 2019 triggered a seismic shift from coast-to-coast. Scores of cities are now considering easing restrictions on magic mushrooms and other psychedelics.

In the mainstreaming of hallucinogenic substances, we’re seeing the birth of a new consumer industry. A similar dynamic, of course, has been occurring with cannabis.

In a clear sign that marijuana has become an everyday consumer substance, several states and localities have deemed recreational and medical pot as essential, amid a coronavirus outbreak that’s crushing the economy as a whole.

Pot sales in America are surging to record highs during the COVID-19 pandemic, especially in the medical sector. In fact, our team of investment analysts have pinpointed a small marijuana biotech that’s poised to disrupt Big Pharma and become “The Pfizer of Pot.” Click here for details.

It all adds up to enormous momentum for companies involved in marijuana and psychedelics. This year, the first biotechnology firms to develop medical treatments from psychedelic drugs such as psilocybin have gone public on Canadian stock exchanges.

In addition to scrutinizing the marijuana industry, our investment analysts also have been researching the money-making opportunities in magic mushrooms.

We’ve recently uncovered one innovative company that’s positioned to dominate the emerging magic mushroom industry. Early investors are lining up for big psilocybin profits, which means you should act now. For our special report on magic mushroom investing, click here.

Questions about profitable opportunities in marijuana and psychedelics? You can reach me at: mailbag@investingdaily.com