Get Ready for The Stock Market Bubble to Pop

Today, I turn your attention to George C. Parker, an American con man who repeatedly “sold” the Brooklyn Bridge (in the form of purported toll booth rights) to gullible immigrants. He was convicted of fraud in 1928 and died in prison. Parker’s story gave rise to the popular expression: “If you believe that, I have a bridge to sell you.”

Every day, I hear politicians (or their shills on CNBC) confidently asserting that the coronavirus is under control, the economy is roaring back to life, and investors should buy risk-on assets with both hands. Mr. Parker would have been impressed with this brazen level of bamboozlement.

The stock market has been rallying, despite economic conditions reminiscent of the 1930s. So what’s keeping stocks afloat? For the most part, it’s the Federal Reserve. The U.S. central bank is snapping up corporate debt, which is akin to injecting the financial system with steroids. But steroids come with harsh side effects.

Stocks closed sharply lower Tuesday amid pandemic jitters. The Dow Jones Industrial Average fell 1.51%, the S&P 500 lost 1.08%. and the tech-heavy NASDAQ slid 0.86%. The price of gold topped $1,800 per ounce to reach its highest level since 2011, confirming the yellow metal’s suitability as an investment hedge during this crisis. In pre-market futures trading Wednesday morning, the three main U.S. stock indices were poised to open modestly higher.

Below, I examine the market’s mounting risks. I also reveal safe investment opportunities you should consider now, before the bubble bursts.

Propping up stock prices is the Federal Reserve’s aggressive bond-buying. Much of the acquisition of corporate bonds has occurred without full disclosure as to which companies are recipients. Indeed, some of these large companies have received Fed bailouts even though their balance sheets are relatively healthy.

Fed Chair Jerome Powell has committed the central bank to keeping the monetary spigot wide open. After all, it’s an election year. Problem is, corporate debt already was hovering at historic highs before the COVID-19 pandemic. The debt largely resulted from Fed stimulus in the wake of the 2007-2009 Great Recession. U.S. non-financial corporate debt soared to a record $10.12 trillion by the end of 2019 (see chart). 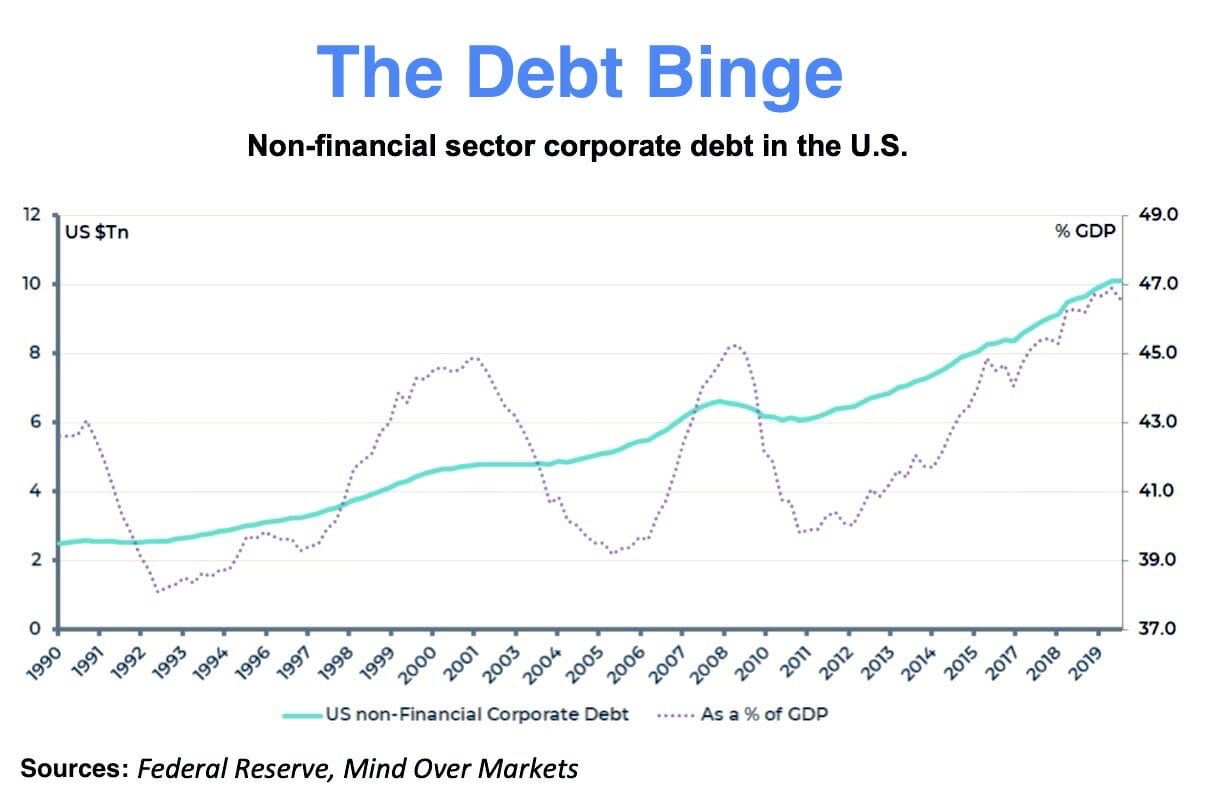 The Federal Reserve is doubling-down on its Great Recession bailout. If the economy doesn’t soon improve, much of this debt could go into default, triggering financial contagion.

But it’s hard to see how the economy can quickly recover, with the coronavirus pandemic growing dramatically worse throughout the country. Those who think the worst of the pandemic is behind us are living in a fool’s paradise. Don’t take my word for it. Look at the chart: 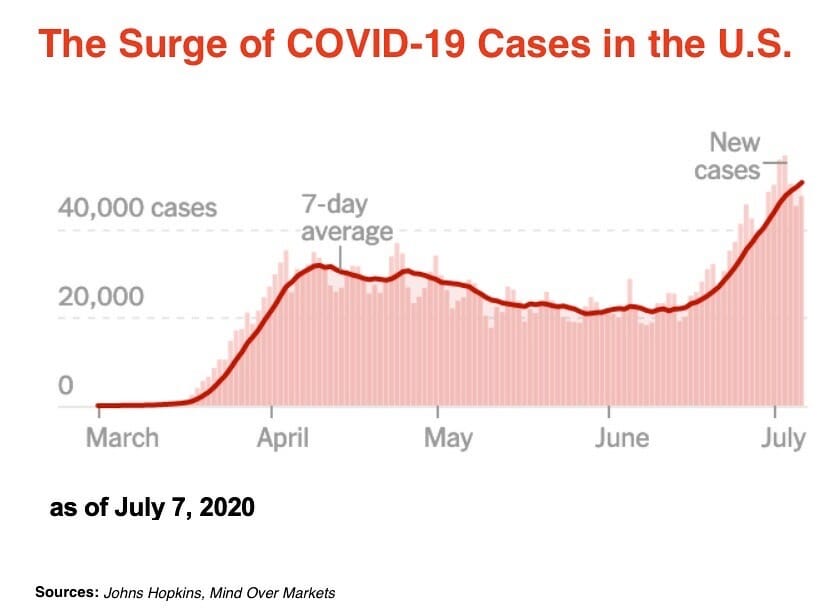 As of this writing on Wednesday morning, cases of the coronavirus in the U.S. totaled nearly 3 million with more than 131,000 deaths. The total number of U.S. deaths is expected to reach at least 200,000 by September. Johns Hopkins on July 7 recorded over 60,000 new cases nationwide, surpassing the previous single-day record. Health experts warn that these numbers actually under-count cases.

No amount of monetary stimulus or “magical thinking” can alter this empirical data. The pandemic’s deadly toll will continue to weigh on the economy and eventually the stock market. Praying for a vaccine or ignoring scientists is not a strategy.

The Fed’s response is to bailout its previous bailout, a desperate move that’s likely to end in tears. At the same time, federal programs to assist unemployed individuals and struggling small businesses are expiring.

Congress is gridlocked on proposals for further fiscal stimulus. Don’t expect immediate progress. Lawmakers are in summer recess for the next two weeks.

While Congress dithers, states and localities are grappling with severe budgetary shortfalls that are resulting in worker layoffs, higher taxes, and reduced services. The economy is mired in a deep recession and unemployment hovers at 11.1%, which is worse than the jobless levels experienced at the nadir of the Great Recession. Hospitals around the country, especially in the Sunbelt, are in crisis mode as they get flooded to overcapacity with coronavirus cases.

Meanwhile, projected corporate earnings are dismal. According to the latest projections (as of July 2) from research firm FactSet, the estimated earnings decline for the second quarter for the S&P 500 stands at -43.8%. If -43.8% turns out to be the actual decline for the quarter, it will mark the largest year-over-year decline in earnings reported by the index since Q4 2008 (-69.1%).

And yet, stocks are trading at lofty valuations. Wall Street is confident that the Fed will continue to print money to buy as many corporate bonds as necessary to keep credit flowing to the business sector, regardless of the risk.

According to the widely followed Cyclically Adjusted Price to Earnings (CAPE) Ratio, stocks in the S&P 500 sport excessive valuations with eerie parallels to 1929 and 1987 (see the following chart, which depicts the latest CAPE data as of market close July 7).

The CAPE ratio is defined as price divided by the average of 10 years of earnings (moving average), adjusted for inflation. This measure provides a more meaningful context than the standard P/E ratio. The CAPE ratio now stands at 29.7, compared to the historical median of 16.2.

The upshot for investors: Conditions are ripe for a stock market correction before the end of the year. All of that exuberant bullishness you hear on financial cable news? The Wall Street con men are trying to sell the Brooklyn Bridge…again.

History shows that asset price bubbles become unsustainable without additional injections of new money by central bankers. But the Fed can’t indefinitely print money to buy toxic corporate debt, unless it wants to nationalize the financial markets. When the flood of funny money stops, the bubble will burst.

The good news is, our experts have unearthed a group of safe haven stocks that won’t be following the economy to the bottom. In fact, they’re the safest equities in America.

Not a single company in this entire industry has ever gone out of business. That’s because every single one of these businesses sells something that people refuse to go without.

Want to insulate your portfolio from the next market shock? Click here for our special report.