Last week, I discussed how the biotech company Novavax (NSDQ: NVAX) has appreciated more than 2,000% this year. Novavax has a COVID-19 vaccine treatment in trial that appears quite promising. Its newfound popularity on Wall Street is understandable.

However, it isn’t just biotech stocks like Novavax that are attracting gobs of investor capital. For example, shares of electric vehicle (EV) manufacturers have gone through the roof lately: 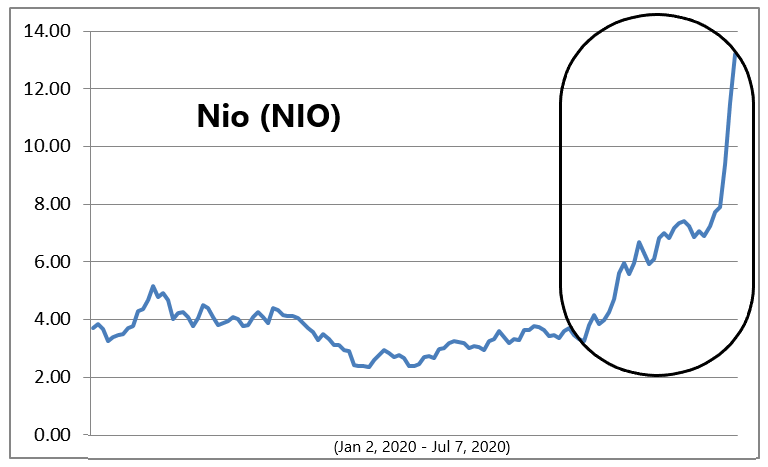 That’s puzzling, especially when the global economy is still reeling from the coronavirus pandemic. New car sales have taken a beating. The financial incentive to convert from a traditional combustible engine burning gasoline to a battery-powered vehicle is lower than it’s been in years thanks to low oil prices.

Nevertheless, a run on EV stocks is on and apparently nobody wants to be left behind. In June, the average daily trading volume in Tesla was 11.6 million shares. On July 2, Tesla reported better than expected vehicle production results during the second quarter. Over the next three days, trading volume jumped 70% to an average of 19.7 million shares.

Perhaps more than ever, the stock market appears to be in the grips of FOMO, or “fear of missing out.” Especially among institutional money managers, there is safety in numbers. As long as everyone agrees to buy the same stocks, share prices can only go up.

Similar to Novavax, Tesla’s surge in popularity is a result of the coronavirus pandemic. Institutional investors have to put their money somewhere and COVID-19 threatens to put a lot of companies out of business.

Portfolio managers have a choice: They can either own a reasonably priced company in a struggling sector of the economy or overpay for a business that operates in a sector that is nearly certain to survive.

The EV market is one of the few sectors of the economy that is the closest thing to a slam dunk. It may not take off this year or next, but it most definitely is coming. That being the case, the only question is how soon will it get here?

According to a recent report by the International Energy Agency (IEA), “Sales of electric cars topped 2.1 million globally in 2019.” That equates to 2.6% of all car sales last year and 1% of “stock,” or all cars on the road.

Under the “Sustainable Development” scenario, the IEA projects a 36% growth rate in EV stock over the next 10 years, “reaching 245 million vehicles in 2030.” The “Stated Policies” scenario is considerably less optimistic, topping out at 140 million EV stock by the end of the decade.

That’s a huge difference. Which case you choose to believe will influence how much you are willing to pay for a stock like Tesla. Apparently, a lot of people are betting on the best-case scenario based on the current buying frenzy for EV stocks.

Getting Back to Basics

It’s too late to get in on Tesla (and most other EV stocks) at a reasonable price. Now trading at nearly 400 times forward earnings, Tesla is arguably the most expensive stock in the entire S&P 500 Index.

However, it’s not too late to join the EV gold rush. Instead of buying the vehicle manufacturers, you can still buy at a reasonable price what they will need to produce all those vehicles.

To do that, consider the Amplify Advanced Battery Metals and Materials ETF (BATT). This fund owns shares of companies that mine and produce basic materials such as lithium, cobalt, and nickel used in batteries that power electric vehicles of all types. 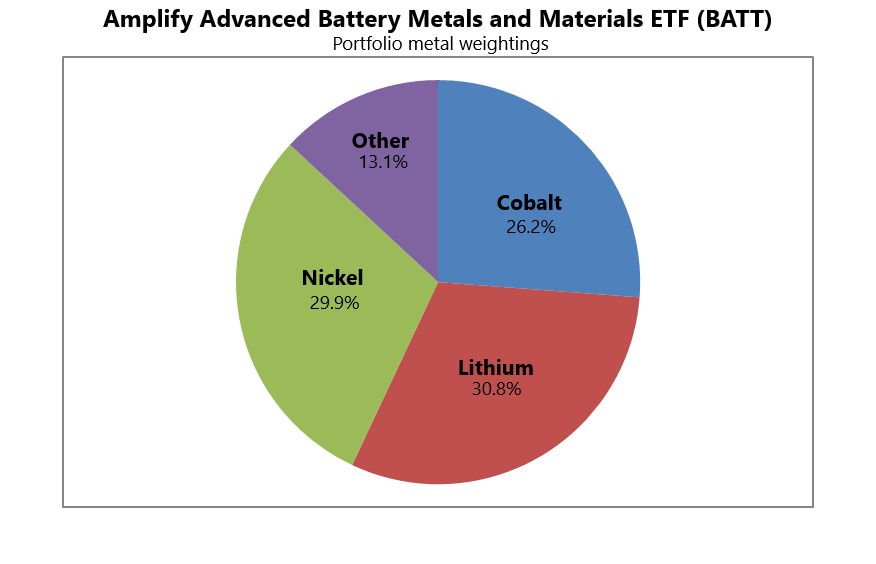 This fund is small, with only $4 million in assets. That means a sudden spike in interest in the companies it owns could send its share price surging.

Despite rallying 65% from its low on March 23, BATT is down 14% so far this year and is 50% below its IPO price from two years ago. That’s largely due to a decline in inflationary fears, which tends to drive the direction of basic material stocks.

Logically, one of two things should happen over the next 12 – 18 months. Either BATT’s share price should move considerably higher or EV stocks such as Tesla will crash.

If that’s too much of a gamble for you to take, consider another sector of the economy that is certain to grow in the years to come: medical marijuana.

The legalization of marijuana is a social, political, and financial revolution that’s making early investors rich. But in the fickle marijuana sector, careful stock selection is all the more important. This year and beyond, the winners in the marijuana sector will boast prudent management and solid balance sheets, particularly biotechs with proven or promising products.