During the Reagan Era, I worked as a press secretary to U.S. Rep. Byron Dorgan (D-ND). Now retired, Byron was a hard-working public servant, as you’d expect from a denizen of the Northern Great Plains.

But Byron was an exception. Generally speaking, you’d be shocked at how little work actually gets done on Capitol Hill. Members of Congress work fewer than half of the days in any given year. I’ve witnessed these work habits firsthand. The marbled halls of congressional office buildings tend to be sparsely populated on Mondays and Fridays, as your elected officials routinely take three-day workweeks.

Which brings me to the COVID-19 crisis. Expanded unemployment benefits expire at the end of July. Does Congress feel a sense of urgency to hammer out a new deal on fiscal stimulus? Apparently not. As coronavirus cases surge throughout the country, lawmakers are in summer recess and don’t return until July 20.

To be sure, Congress passed the $2.2 trillion CARES Act in March, which provided stimulus checks and loans for individuals and businesses. But most of the provisions are running out of money. There’s currently sentiment on Capitol Hill that further stimulus isn’t necessary because the unemployment rate recently declined, but the latest report for June was calculated before the recent resurgence of the virus. Millions of Americans face dire economic hardship.

The upshot: I don’t share Wall Street’s faith that Congress will step up to the plate in coming weeks and enact measures to rescue the economy, especially in the context of a bitterly fought presidential election year. More fiscal stimulus? An infrastructure bill? All before November? As Tony Soprano might say: Fuggheddaboutit.

Below, I pinpoint investment moves that will protect your portfolio and help you make profits, regardless of what Congress does (or doesn’t do).

We’re seeing complacency on Wall Street because the headline unemployment rate in the U.S. has dipped over the past two months. However, joblessness continues to hover at levels not seen since the Great Recession. Unemployment fell from 14.7% in April to 13.3% in May and dropped to 11.2% in June. But don’t pop open the Champagne.

The decline in joblessness mostly occurred because employers invited back their furloughed workers as states reopened their economies. The following chart shows the worst hit industries: 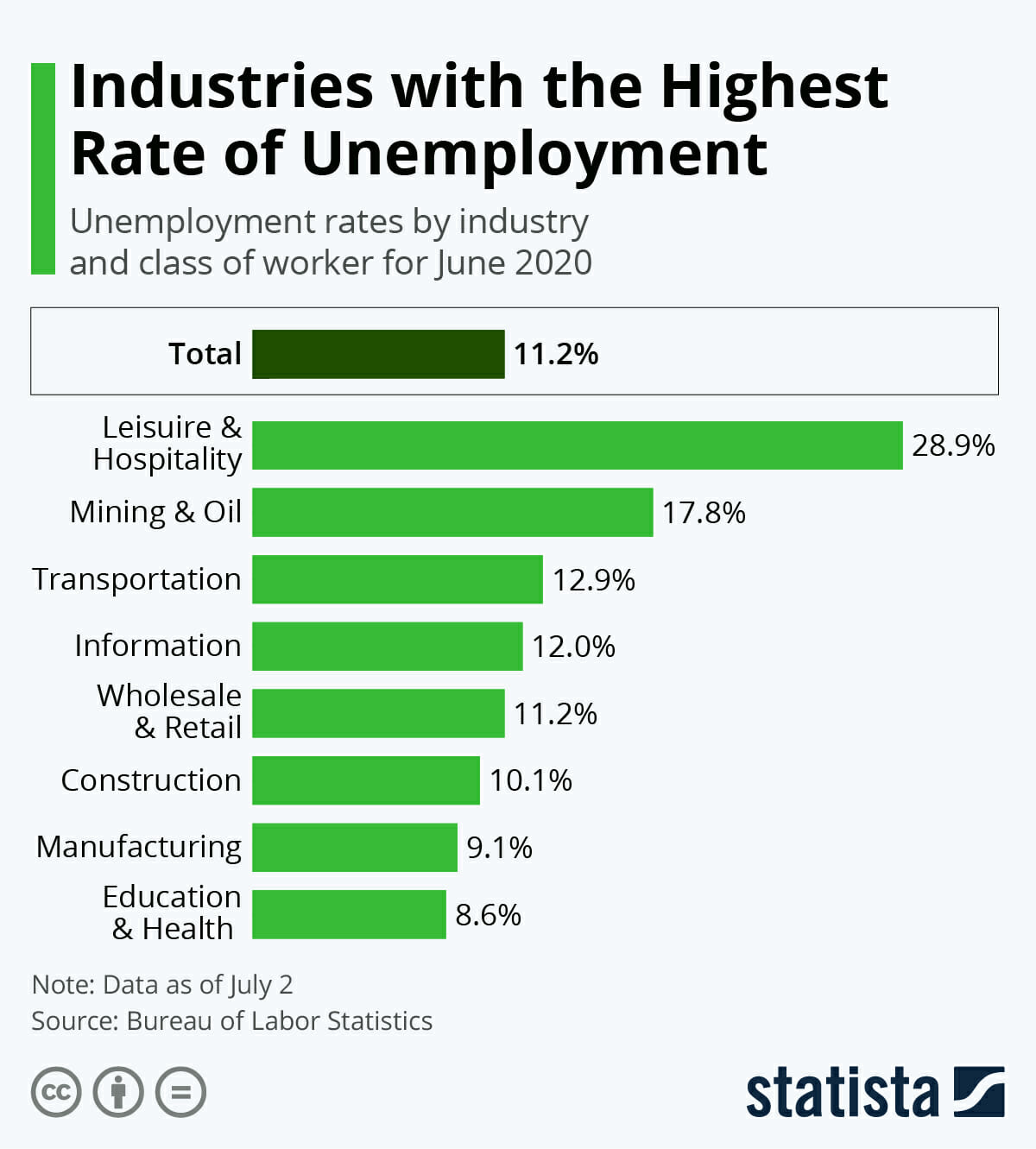 A few economic indicators have turned positive. Notably, the ISM Non-Manufacturing Index jumped sharply higher in June. But since that survey was taken, the economy has been thrown back into disarray, as several states rescind their reopenings amid surging coronavirus infections and deaths. State and local governments are grappling with extreme budget crises and will soon start laying off workers to balance their budgets.

A company’s stock price reflects investor perception of its ability to grow its profits in the future. However, about 80% of S&P 500 companies have withdrawn earnings guidance for the rest of this year. The uncertainties of the pandemic have rendered useless many of the conventional financial metrics used to project earnings. When it comes to earnings, investors are flying blind.

According to FactSet, the data provider for Investing Daily, the estimated second-quarter earnings decline for the S&P 500 is -43.8%, but that number could quickly change. Analysts predict a year-over-year decline in earnings in the third quarter (-25.2%) and the fourth quarter (-12.7%).

There’s a disconnect between high stock market valuations and dismal earnings projections. But investors find stocks more appealing than the alternatives and the Federal Reserve continues to pump massive stimulus into the financial system. The Fed can print money, but it can’t print jobs.

The worst “black swan” since WWII…

The stock market and the economy don’t move in lockstep. Yes, they influence each other, but the markets are forward looking and they’re driven by emotions that are often irrational. Pervasive on Wall Street right now is the irrational belief that the pandemic is fading, contrary to the evidence.

This coronavirus pandemic is the most disruptive “black swan” event since World War II. The trauma will last a lot longer than the bulls realize. I continue to maintain that we’ve been witnessing a bear market rally.

Since the stock market crash of 1929, which ushered in the Great Depression, the S&P 500 and its predecessor index have experienced 14 separate bear market rallies. The stock market during the 1930s underwent several strong rallies. They all petered out.

The global debt bomb gets little attention on financial television because it’s “boring” and bad for ratings. The performers on these shows would rather hyperventilate about possible vaccines (it’s more entertaining). But debt is a worsening threat to market stability.

Case in point: The World Bank on Wednesday called for the Group of 20 major economies to extend a freeze on bilateral debt payments by the world’s poorest countries through 2021. The bank also said permanent debt reductions would be needed for those nations in the heaviest debt.

These “essential services” industries tend to weather crises and crashes. Pocket profits from your biggest gainers, especially overbought tech stocks, and dip your toes into these three recession-resistant sectors.

We’ve put together a special report that explains why the broader stock market could drop another 31% over the near term. But here’s the good news: This report also pinpoints a class of all-weather stocks that can provide growth, safety and income, even in down markets. Click here for details.

Inaction reigns on Capitol Hill. That’s why investors should act for themselves.