My Greek-born immigrant grandfather (on my dad’s side) used to tell me colorful stories about Prohibition, an era that lasted from 1920 through 1933. “Everybody just kept on drinking,” he once told me, shaking his head. “Even the politicians who made big speeches against booze.”

By listening to my grandpa’s social observations when I was a kid, I got an early education in the hypocritical ways of the world.

Prohibition (aka the Volstead Act) of course was doomed, which is usually the case when the government tries to legislate morality and ordinary citizens thumb their noses at the law.

As the Great Depression got underway and the economy collapsed, anti-Prohibition activists succeeded in winning over even teetotalers to their cause, arguing that the country needed the jobs and tax revenue of legalized alcohol. The Democratic Party gained power in the 1932 elections and Prohibition ended in 1933.

In this pivotal presidential election year of 2020, I see parallels to 1932. Instead of alcohol, the substance in question is marijuana. The parallel is even stronger when you consider the jobs and tax revenue at stake with cannabis.

Legal marijuana is a jobs generating machine in both the recreational and medical sectors, further proof that the industry and its publicly traded companies have staying power. The marijuana stock swoon last year was traumatic, but those new jobs won’t suddenly disappear. At the same time, state and local politicians are getting addicted to the revenue from marijuana taxes. Mary Jane is employing Americans and balancing state government ledgers.

We’re now witnessing the most marijuana-friendly U.S. Congress in history. It’s only a matter of time before marijuana prohibition is removed not just by the states, but also by the federal government.

Last weekend, a prominent United States Senator suggested that the federal legalization of marijuana is inevitable.

“We’ll have the majority of the votes in the United States Senate. And I know [Senate Minority Leader Chuck Schumer (D-NY)] has moved in that direction, he’ll be the majority leader in January. I think we’ll have votes to just move it, and the science has moved there.”

Biden remains opposed to adult-use legalization, but Markey insists that supporters will have the votes to pass it anyway. He went on to say:

“From my perspective, this is another issue that’s just right there on the ballot in November. We’ll move very quickly in January to change these laws to make sure that there are national protections which are put in place.”

You can watch the entire July 11 interview by clicking here.

The trend is your friend…

In the U.S., marijuana remains illegal on the federal level. Medical marijuana is currently legal in 33 states and the District of Columbia. Recreational use is legal in 11 states and DC. Here’s a snapshot of the legal landscape in America for marijuana: 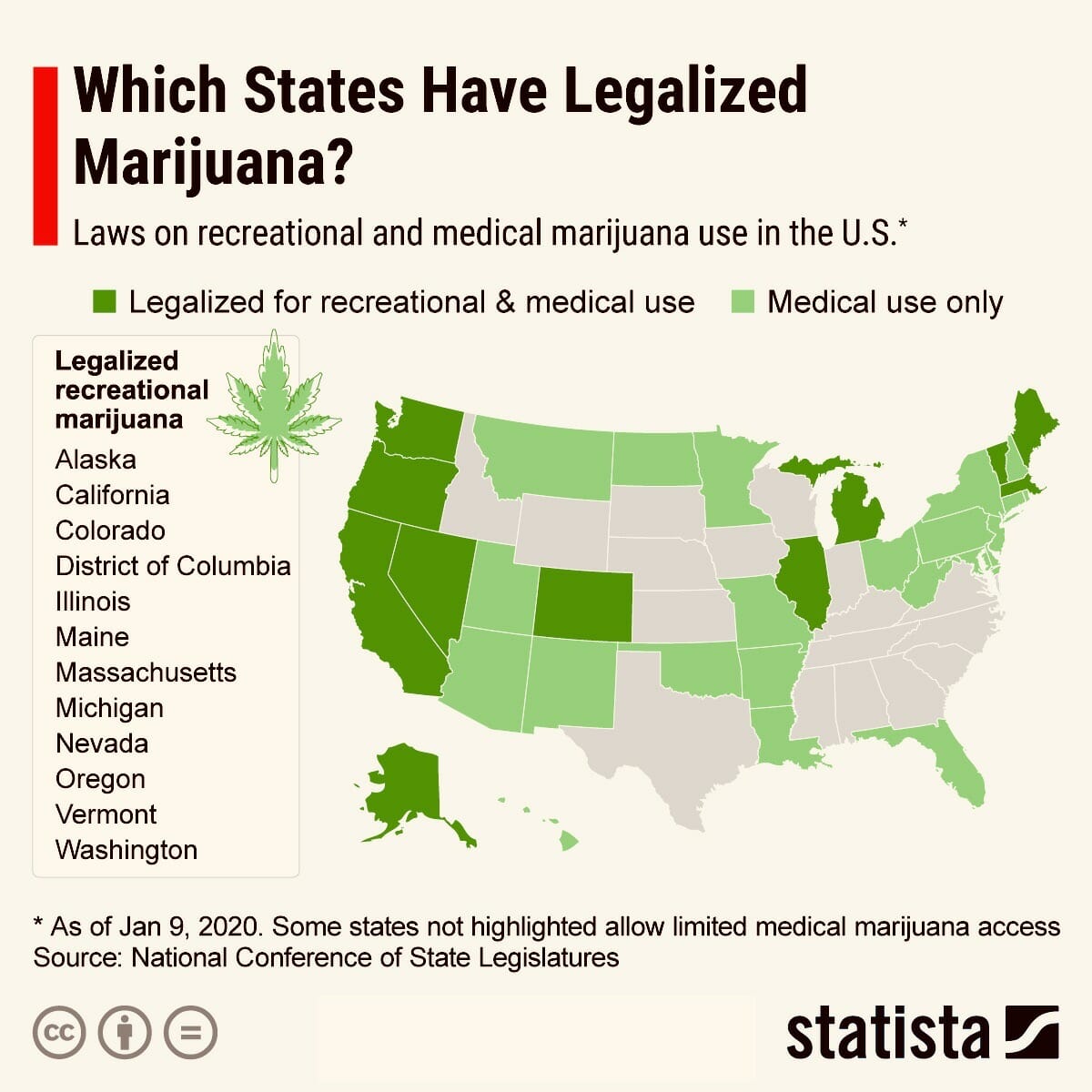 Analysts estimate that an additional 15 states should have legalized medical and/or recreational pot by 2020. If you own inherently sound marijuana investments but they took a beating during the pot stock correction in late 2019, hang on and remain patient. The trends are in your favor.

Several bills are pending in Congress that would remove federal restrictions on marijuana. Notably, U.S. Senator Cory Booker (D-NJ) recently reintroduced legislation to legalize marijuana nationwide and expunge federal convictions for possession or use of the drug.

Read This Story: One Nation, Under Marijuana

To be sure, Biden has adopted a more restrictive approach to marijuana than most Democrats in Congress. But chances are, Biden is merely appeasing socially conservative voters as he seeks the Democratic nomination for president. The informed hunch of many politicos is that Biden will move toward full legalization if elected.

Looking to make money on marijuana legalization? Our team has unearthed a hidden gem in cannabusiness that’s flying under the radar.

This innovative cannabis biotech is on the cusp of becoming “The Pfizer of Pot.” The time to act is now, before this little-known company becomes a household name and its stock price soars. Click here for details.