The Short Story on Tesla

Five months ago, I noted that electric vehicle (EV) manufacturer Tesla (NSDQ: TSLA) was in the midst of a speculative bubble. At that time, TSLA had doubled in value in just six weeks. Since then, it has doubled in value again. More on that in a moment.

I knew better than to bet against Tesla. Tesla has become a cult stock despite its lack of profitability. That doesn’t seem to matter to its very loyal cadre of shareholders. For them, paying more than 400 times next year’s earnings is a fair price for the privilege of owning the stock.

I don’t agree with them, but I also know when to stay out of the way of a freight train. Eventually, Tesla will be judged by more conventional metrics. Until then, shorting the stock is probably a bad idea.

Instead, I recommend shorting shares of the First Trust NASDAQ Global Auto Index Fund (CARZ). My reasoning was simple: “If TSLA tanks, the entire sector will probably sell off in sympathy.” Tesla is this fund’s single largest holding at roughly 10% of total assets.

Tesla did not tank, but the rest of the automobile sector did. That’s because the rapid emergence of the coronavirus pandemic in February caused new car sales to plunge in March.

On February 10, the day that article was published, CARZ closed at $34.53. Had you shorted the stock that day and bought it back when it bottomed out below $20 on March 18, your gain would have been 40% in just six weeks! 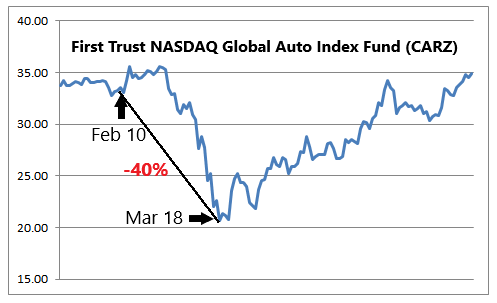 I will admit I was right for the wrong reason. Although shares of Tesla continued to appreciate, the remainder of the fund’s portfolio got slammed by COVID-19. As the old saying goes, sometimes it’s better to be lucky than good.

Now, I’m hoping to be both lucky and good. At the end of last week, CARZ traded above $35 thanks to Tesla’s soaring share price. That means it is more expensive now than it was when I made my original recommendation to short shares of CARZ.

By the time you read this, Tesla will have released its Q2 results on July 22. I’m not expecting any major surprises since Tesla pre-released its second quarter vehicle production and delivery numbers on July 2.

Assuming that is the case, I would expect TSLA to continue its upward trajectory. If that happens, then shorting CARZ again could be more profitable this time than before.

That’s because a second round of COVID-19 later this year could once again send new car sales plummeting. And with Tesla valued at nearly 500 times forward earnings, its share price is likely to take a hit along with the overall stock market.

If you back out Tesla’s huge gain over the past five months, CARZ’s share price would be closer to $28 today. That’s about 20% below its current value if not for TSLA.

If we get the same price movement in Daimler AG (OTC: DMLRY), Toyota (NYSE: TM), Honda (NYSE: HMC), and all the other automakers that we got last time along with a 20% drop in Tesla, then CARZ could fall all the way to $15.

If that happens, shorting this exchange-traded fund would be very profitable. The gain could be more than 100%.

The problem with shorting TSLA is that it is a very expensive stock. You would need to keep a lot of money on margin with your broker to do it.

At a share price near $35, CARZ is 98% cheaper than TSLA. However, the profit potential is nearly the same. For a lot less money, you can make a short play on Tesla without breaking the bank.

Betting on the 5G revolution…

Don’t get me wrong, I’m not hoping for a second wave of COVID-19. Nor would I be happy to see the auto sector take another hit. However, I don’t get paid to make investment decisions on what I hope will happen.

Instead, I try to see things for what they really are and make my move before Wall Street catches on. And right now, I see an opportunity in the 5G sector that is being largely ignored by the market.

The global roll-out of 5G wireless will hasten the spread of the Internet of Things (IoT), the seamless web of interconnected devices. IoT is transforming our lives and its potential investment profits are vast.

Problem is, there’s a fatal flaw in 5G technology that could bring IoT to its knees. Therein lays money-making potential for proactive investors.

Our investment team has tracked down one small, little-known company that has the key to resolving this 5G flaw. When the investment herd finds out, the stock will soar. Click here to learn more.