I’ve spent most of my long journalistic career as a road warrior. For me, extensive air travel has been a way of life. And now, amid the coronavirus pandemic? I have zero desire to get aboard a pressurized fuselage to breathe re-circulated air with other masked passengers at 30,000 feet.

Multiply my sentiment by several million other consumers and you understand the severe woes of the airline industry and by extension the broader economy. The pandemic has devastated air travel all over the world, with economic consequences that emanate far beyond the sector.

According to the International Air Transport Association (IATA), airlines globally are projected to lose a record $84 billion in 2020, more than three times the loss incurred during the Global Financial Crisis.

The U.S. is home to the largest air travel market of any single country, with about 926 million passengers transported in 2019. Because of the lack of ultra-fast rail transport in America, airlines play a vital transportation function for individuals and a myriad of industries. The collapse of the airlines suggests that the broader economy that depends on air transport is headed for trouble.

Air cargo is an economic bellwether and cargo activity has been deteriorating in tandem with the decline in global trade. The pressure on crude oil prices has been severe, as jet fuel demand craters.

Watch This Video: 7 Rules for Investing During the Pandemic

In addition to the destruction of passenger demand, airlines already grappled with challenges in reducing operating overhead because of a relatively high amount of fixed costs.

All four airlines saw their operating revenues drop by more than 80% on a year-over-year basis in the three quarters ending June 30, as the COVID-19 outbreak brought travel to its knees (see the following chart, released by research firm Statista on July 23). 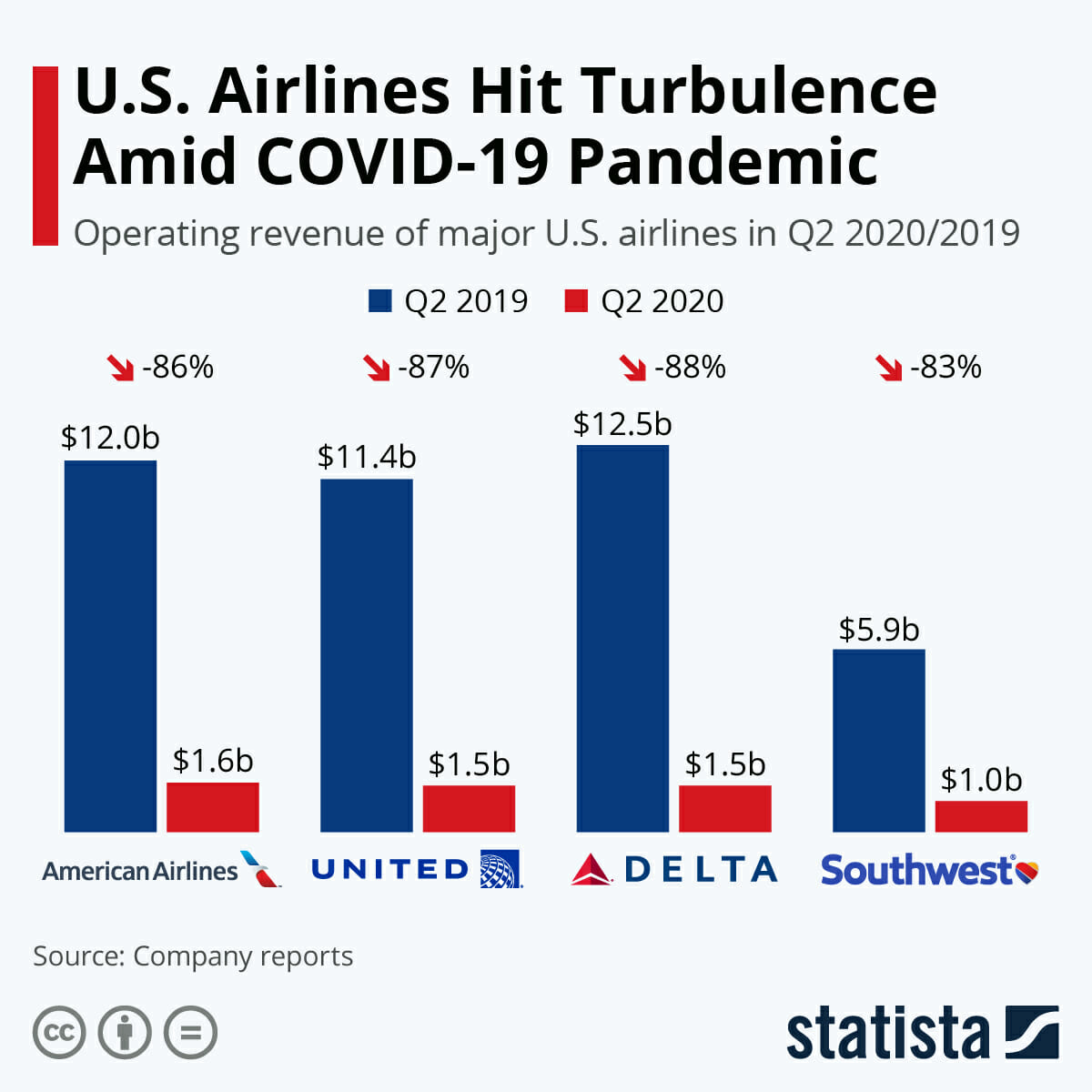 Year to date, the industry benchmark exchange-traded fund U.S. Global Jets ETF (JETS) has generated a return of -48.7%, compared to a return of +0.15% for the S&P 500 Index (as of market close Thursday).

The Payroll Support Program, which helps airlines cover their payroll expenses as part of the CARES Act, provided some relief in the past quarter but not enough to stem the tide of red ink.

In recent weeks, the airlines started to see an uptick in demand, as states reopened their economies. However, the resurgence of the coronavirus has prompted many states to reclose and it’s also sent consumers back into a defensive crouch. Amid a rising COVID-19 death toll, people are shying away from airplanes again.

In addition, lucrative transatlantic travel is getting clobbered as the European Union bans Americans from traveling to the Continent. Virus infections and deaths are rising in the U.S. but flattening in several European countries, which means the EU isn’t likely to lift its ban anytime soon.

Warren Buffett has turned his back on the airlines, a clear bearish indicator. Buffett’s Berkshire Hathaway (NYSE: BRK.A, BRK.B) in the first quarter dumped all of its shares of Delta, American, Southwest, and United. The amount of stock sold totaled $6.1 billion. Berkshire took a bath, the extent of which it hasn’t disclosed.

These disheartening facts weighed on stocks Thursday. The Dow Jones Industrial Average lost 1.31%, the S&P 500 shed 1.23%, and the NASDAQ Composite plunged 2.29%. Overpriced large-cap technology stocks were due for a breather and they certainly took one yesterday. In early trading on Friday morning, all three indices were firmly in the red.

Souring investor moods is a renewal of Sino-American tensions, as the two countries engage in tit-for-tit consulate closures over U.S. allegations of Chinese industrial espionage.

Also dampening stocks are indications that the labor market is far from recovered. The U.S. Department of Labor reported Thursday the first weekly increase in new unemployment claims since March, confirming fears that the spike in coronavirus cases and the concomitant resumption of lockdowns are impeding economic recovery.

Initial jobless claims came in at 1.416 million for the week ending July 18, the 18th straight week in which initial claims totaled more than 1 million. The consensus of economists expected the number to come in at 1.3 million. Thursday’s report snapped a 15-week streak of declining initial claims.

An increasing number of “temporary” layoffs have become permanent. And for many people lucky enough to still have a job, their paychecks are getting reduced. Enhanced unemployed benefits expire on July 31. As of this writing, Congress was haggling over a new coronavirus stimulus bill. If one doesn’t get passed, millions of Americans face poverty and evictions.

The brinkmanship in Washington probably will exacerbate the economy’s decline, as anxious consumers respond to the uncertainty about unemployment benefits by pulling back on their spending. The jobs market won’t properly recover until COVID-19 cases start to go down.

There’s considerable optimism right now (unwarranted, in my view) about a possible vaccine, with Big Pharma getting huge assistance from the coffers of desperate governments. The U.S. government on Wednesday inked a $2 billion deal with Pfizer (NYSE: PFE) and BioNTech (NSDQ: BNTX) to secure 100 million doses of their COVID-19 vaccine candidate, payable if the inoculation succeeds in clinical trials.

However, you should curb your enthusiasm over a vaccine; it’s unlikely we’ll see an effective treatment this year. Under the best of circumstances, it takes years to develop a safe vaccine. If the federal government decides to push an unready and unsafe vaccine onto the market in the autumn, well, that’s another discussion for another time.

Health experts largely blame the coronavirus resurgence in the U.S. on citizens refusing to wear masks and not following social distancing rules, as states lifted their lockdowns over the past few weeks. The death toll has been especially acute in the South and Southwest. Premature re-openings have turned out to be self-defeating, as states go back into lockdown and consumers get spooked all over again.

We now have the worst of both worlds: a collapsing economy and a surging pandemic. Stay invested but get defensive.