I’m cursed with an excellent memory. I remember back in 2007, on the eve of the global financial meltdown and Great Recession, many policymakers and pundits were insisting that everything was just fine because the market was up and stock prices are the best gauge of prosperity.

Many of those exact same people are making similar arguments today. Below, I’ll explain why they’re “covidiots” and a threat to your portfolio.

Don’t get me wrong: You should stay invested. But you need to exercise careful stock picking. For unprepared investors, a market crash could ruin their nest eggs and force them to work through retirement.

Does the prospect of working in your supposed golden years appeal to you? I didn’t think so. Read on, for advice on how to prevent that scenario from happening.

Clinical psychologists call it “toxic positivity.” In February this year, as the pandemic emerged as a crisis in the U.S., many high-level pooh-bahs assured us that the virus was contained and a recession was impossible. They’ve clung to these erroneous assertions ever since, evidence to the contrary.

As recently as last Sunday on the TV gabfests, I watched with incredulity as officialdom assured us that the coronavirus is under control and a V-shaped economic recovery awaits around the corner.

I worked in Congress as a press secretary in the late 1980s, so I’ve witnessed these shenanigans firsthand. It still amazes me how people with power and influence can be so consistently and disastrously wrong and still keep their jobs.

Market crashes are painful but they’re also liberating because they obliterate falsehoods. During the U.S. bear market of 2007-2009, the S&P 500 lost about 50% of its value.

As the global financial system melted down in 2008, defenders of the sub-prime housing market were suddenly absent from CNBC.

Financial media are hyping the hopes for a coronavirus vaccine. However, it’s highly unlikely that a vaccine can be developed and deployed this year.

Headlines about “positive” results concerning vaccines have accomplished at least one goal: they’ve lined the pockets of corporate insiders. The vast majority of these touted vaccines will never pan out, but the flurry of news coverage has allowed top biotech executives, who knew in advance of announcements, to buy up stock and then, after the big run-up, dump their shares.

Some biotech companies have awarded stock options to senior executives immediately before market-moving vaccine announcements. Most of these announcements are marketing ploys. At the same time, certain government contracts to drug firms to develop coronavirus treatments smack of fraud and cronyism.

Amid this race to make windfall profits from a coronavirus vaccine, just make sure you don’t end up as one of the “greater fools” who’s left holding the bag.

Kindergarten on the Potomac…

Meanwhile, amid a contracting economy and high levels of unemployment, Washington’s politicians are squabbling like children.

Senate Majority Leader Mitch McConnell (R-KY) told members last week they could leave for the August recess without passing a new coronavirus stimulus bill. Democrats and Republicans are far apart in their proposals for another stimulus package. Even the GOP caucus is bitterly divided among themselves.

The WEI is an index of 10 indicators of economic activity, scaled to align with the four-quarter gross domestic product (GDP) growth rate. It represents the common component of series covering consumer behavior, the labor market, and production. The following chart depicts the latest release of the index: 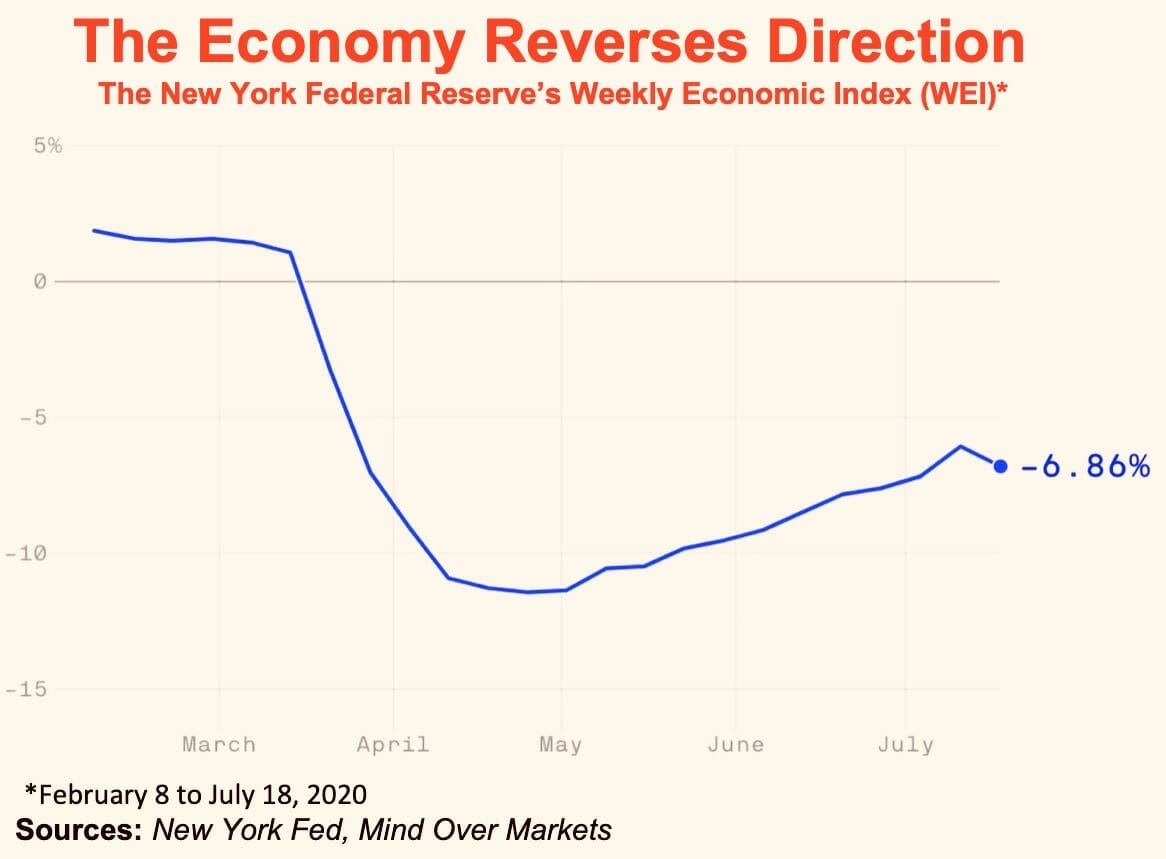 U.S. initial jobless claims increased last week for the first time since March, another sign that the economic recovery is losing steam.

It’s not just 2020 that investors have to worry about. The pandemic will haunt the economy and financial markets for years.

According to the non-partisan Congressional Budget Office, the U.S. will witness $7.9 trillion in lost economic growth through this decade. The World Bank predicts global GDP will shrink by 5.2% in 2020 alone, nearly three times as much as the 2009 recession. 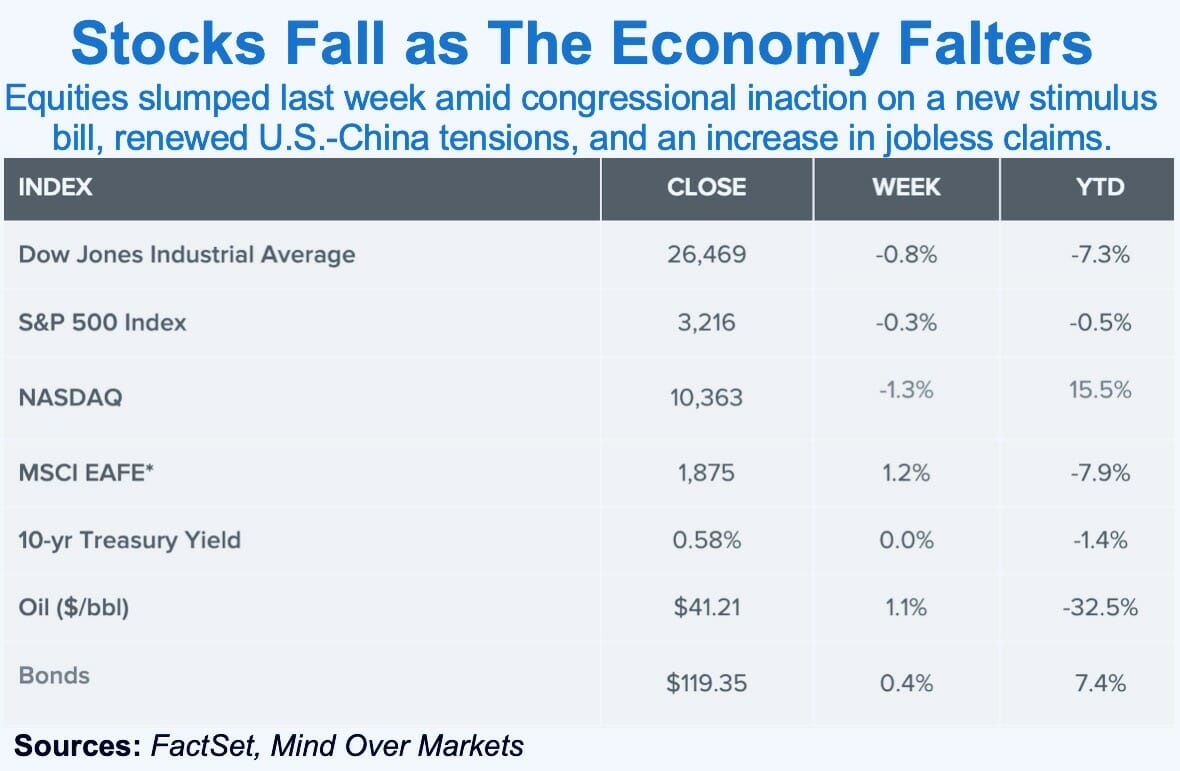 Back here in the U.S., COVID-19 outbreaks throughout the Sunbelt have hampered reopening efforts. Florida has become a coronavirus hot zone, with spiking case totals and a daily death toll now consistently exceeding that of the entire EU, which has 20 times the state’s population.

Stick to the facts…

A stock market correction over the near term appears to be in the cards. Increase your exposure to defensive stocks, but don’t fundamentally change your long-term financial goals.

We can’t wish away the pandemic. The virus can’t be cajoled, bullied, or lobbied. One of the worst investment blunders you could make right now is to pretend that everything is fine. It didn’t work in 2007 and it won’t work in 2020.

Editor’s Note: During these extraordinary times, with coronavirus whipsawing markets, where can investors safely turn? I suggest you consider my colleague Jim Fink, chief investment strategist of our premium trading service Velocity Trader.

Jim has developed a scientific way to quickly and predictably multiply the gains of regular stocks. His technique works in up or down markets, in economic expansions or recessions…in normal times or during pandemics.

Jim Fink is currently setting up his next trades. Want to learn the details? Click here now.