A Changing of the Guard

The stock market’s behavior took a noticeable turn last week. Further below, I’ll explain what I think it means. But first, a short pop quiz is in order:

You may be surprised to learn that the answer to both questions is exactly the same. Both indexes are cap-weighted, led by Apple (NSDQ: AAPL), Microsoft (NSDQ: MSFT), Amazon (NSDQ: AMZN), Alphabet (NSDQ: GOOGL/GOOG), and Facebook (NSDQ: FB). And since all five of those companies are listed on NASDAQ, they are included in both indexes.

Those five stocks account for roughly 45% of the performance of the NASDAQ 100 and 25% of the S&P 500. That’s why they are so important to the overall stock market. As the old saying goes, “whichever way the head goes, the body will follow.”

That may not sound like much of a difference, but it is. Especially when you consider how much influence those same five stocks have on both funds. In short, it means most other stocks performed better than they did.

That difference can be illustrated by the performance of the Invesco S&P 500 Equal Weight ETF (RSP). It gained 0.5% last week thanks to the other 495 companies not named Apple, Microsoft, Amazon, Alphabet, or Facebook.

That raises an important question. Are we witnessing a pivot away from growth stocks towards value, or are tech stocks so overvalued that this is just a technical correction that will be over in a few days?

I think the answer to that question is “neither.” Most value stocks are trading at low earnings multiples for a good reason. Their revenue streams are under duress due to the coronavirus pandemic. It may not be until next year that we know how many of them will turn out.

At the same time, earnings multiples for the biggest tech stocks have been inflated to historically high levels. According to Yardeni Research, the forward price to earnings ratio of the S&P 500 Index is higher than it’s been since 2001.

Older investors may recall that 2001 was a pretty rough year for stocks. The stock market went through two V-shaped corrections that year. From peak to trough, the S&P 500 fell 35%. It recovered during the fourth quarter to lose only 11.9% for the year. 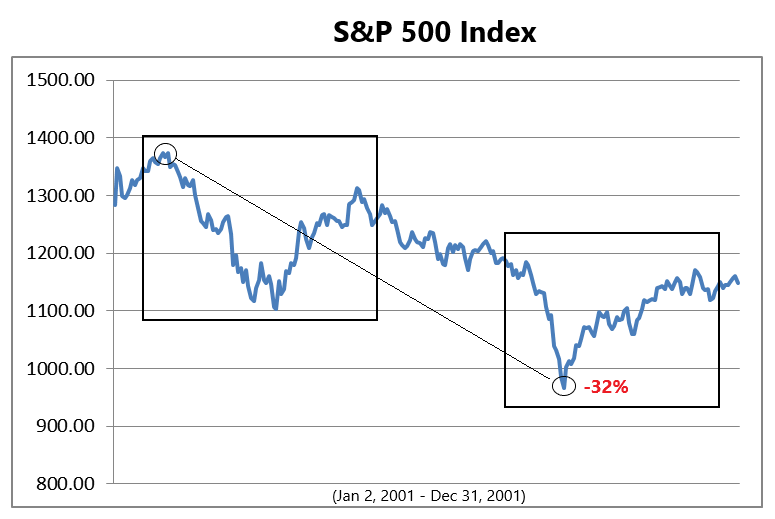 The following year was no bargain, either. In 2002, the S&P 500 declined another 22.1%. By then, nearly all of the grossly overvalued “dot.com” stocks had been flushed out of the system.

I think something similar is likely to occur over the next 12 – 18 months. However, I do not recommend selling all your stocks and waiting for it to end. Instead, I suggest using it as an opportunity to load up on the next generation of stock market leaders.

In September 2001, you could buy Amazon for less than $6. Today, it is trading for roughly 500 times that price. At the same time, Apple could be had for little more than $1 (on a split and dividend-adjusted basis). Last week, Apple came within a few bucks of $400.

Similar tales can be told of Microsoft, Alphabet, and Facebook. Although their ultimate success appears obvious in hindsight, at the time they were all regarded as risky investments.

That’s fine if you’re willing to buy a stock and hold it for 20 years. But if you need to see a return on your money a lot sooner than that, I suggest you take a look at what my colleague Jim Fink has been able to do.

A renowned options expert, Jim Fink is the chief investment strategist of our premium service Velocity Trader. Jim has developed a scientific way to quickly and predictably multiply the gains of regular stocks.

Called the Velocity Profit Multiplier (VPM), Jim’s proprietary investing method allows you to jump into trades with complete confidence because you know that when share prices move in the right direction, VPM will exponentially boost your returns in less than a month.