The “Sweetheart Scam” and How it Preys on the Elderly

Each week I use this column to convey a bit of investing insight or to provide some personal finance tips. Sometimes that involves covering how to avoid being defrauded, which is what I want to discuss today.

Fraud costs Americans billions of dollars every year. When targeted at retirees, it can sap you of the money that is supposed to last through your golden years. I want to talk about a particular type of fraud that is primarily targets older widows, because it hits very close to home for me.

Simply put, don’t get scammed by someone pretending to be me!

Last week I received the following message on Facebook from a woman in Indiana:

“I have many pictures of you on my phone. I met a man on Instagram in Feb 2019 who scammed me over several months of over $80,000. He said his name is Bryan Shawn and he told me he lives in Livingston, Texas. I was very stupid and I believed he would repay me. He is apparently a scammer but I don’t know who he really is or where he is from. I wanted you to know this because he has been using your photos deceiving me and probably others.”

Three years ago my wife and I were sitting on the couch together, and a woman messaged her (again, on Facebook). She just wanted my wife to know that she and I were having an online affair. Let me tell you, that’s a dangerous thing to have your wife hear while you are in close proximity to her.

I told my wife that I had no idea who this woman was, so she investigated. In contrast to the message above, in this case a scammer was actually pretending to be me. They used my profiles at places like Investing Daily and Forbes to bolster credibility. They indicated they were on an assignment overseas, and they had already pressured the woman for money.

The woman sent my wife screenshots of these conversations, and my wife immediately responded “My husband doesn’t talk like that.” The English was very broken. That should have alerted the woman that something was wrong.

The scammer had set up a profile in my name on Instagram. He had accrued several hundred followers. I got the profile taken down, but for a while new profiles popped up as quickly as I could get them removed. I discovered that there were a dozen Facebook profiles using my name and pictures, so I started getting them taken down.

Even today, there are nearly 20 accounts on Facebook with the name “Robert Rapier” but with no profile picture. I can’t get them taken down unless they use one of my profile pictures, which I frequently catch them doing. Some are legitimate, but others are sleeper accounts just waiting to be activated and used in the future.

I fought back. I made sure to put up a picture of my wife and me (that’s us, below) as my profile picture on social media sites (after a “less romantic” picture of us led the scammer to claim this was his niece). 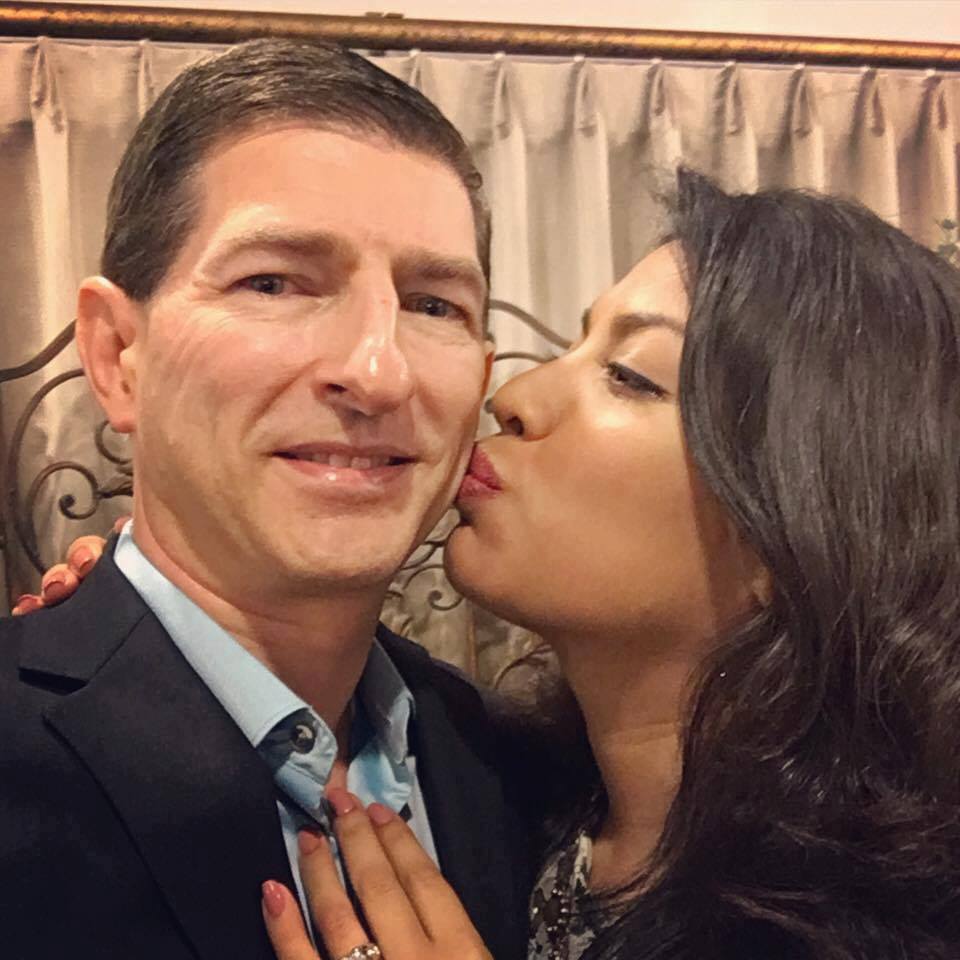 I include this message:

“Note: Someone is impersonating me on Instagram and Facebook. He has mined my photos, and claims to be a widower and is reaching out to women. I want to make it clear to anyone looking to investigate this guy’s story that I am the real Robert Rapier, and I am married.”

How the Scam Works

So what exactly is going on here? These are basically variations of the “sweetheart scam.”

These schemes are generally run from overseas. The scammers will either pretend to be someone with a public profile (as the first one three years ago did), or use their public pictures in order to create a false persona (as the most recent one did).

The objective is to develop an online relationship with these women (friendly or romantic), with the ultimate intent of getting money from them. That can take many forms, such as pretending a medical crisis has occurred, or sending money for airline tickets so the scammer can pretend they will visit their victim.

These scammers frequently target elderly widows, for two reasons. First, they are more likely to have money, either from a life insurance payment or from retirement savings. Second, many women allow their husbands to handle all of the finances, and if the husband passes away the widow may be left with money and may not be financially savvy.

Why have I been used in these scams? It’s not that I am special, but I do have a couple of characteristics that attract these scammers. One is that I have a public profile. Someone may be more likely to be flattered by, or trusting of, someone with a public profile. But more importantly, there are a lot of pictures of me in the public domain. A scammer has access to many pictures he could send to his victim over time.

How can you protect yourself or your loved ones from these scams? Education is the first step, which is why I am writing this article.

Knowing that these scams exist and understanding the warning signs can help inoculate you from being a victim. Spread the word to your friends and family.

If you are a woman who is letting your husband run the finances, become more involved. Some day it may be you running the finances. You don’t want to be a novice handling hundreds of thousands of dollars or more. (That goes both ways. If you are a husband who has always let his wife handle the money, you should both be involved.)

You should always be very skeptical of anyone who reaches out unsolicited to you on the Internet. And be careful reaching out to Facebook or Instagram profiles. Always consider the possibility that they could be fake.

If someone sends you a picture of them, do a reverse image search to see where else that picture may exist. This is how the most recent scam victim found me. She had been sent a picture (one of many), and she decided to do a reverse image search. If you are using Google Chrome and the picture exists online, right click on it and select “Search Google for image.” If that doesn’t yield results, or if the picture has just been sent to you, upload it to TinEye.com.

Finally, if the person is unwilling to video chat with you, you should be extremely suspicious. The list of excuses can be long, but in this day and age there aren’t too many reasons that a person could chat with you online and send you pictures, but couldn’t video chat. Of course a scammer pretending to be someone else won’t be willing to do this, but you should insist if you are thinking about sending them money.

There are a lot of unscrupulous people out there who would take every dime of your retirement savings if they could. Hopefully, understanding the nature of this scam will prevent it from ever working on you.

Editor’s Note: Our colleague Robert Rapier just provided a public service, by exposing a common financial scam that has actually involved himself.

In addition to protecting the wealth you already possess, are you looking to boost your portfolio for greater retirement security? Consider investing in “mega-trends.”

A highly promising mega-trend now is the roll-out of 5G, the next generation of wireless technology. 5G will pave the way for a new wave of technological advancement, which explains why so many companies both large and small are jumping onto the 5G bandwagon.

5G will facilitate the Internet of Things by allowing several interconnected electronic devices and machines to communicate with each other instantaneously at ultra-fast speeds.

5G adoption enjoys a multi-year upward trajectory. Regardless of the worsening pandemic or the renewed U.S.-China trade war, the momentum of 5G can’t be stopped. That spells opportunity for the shareholders of the chipmakers, telecoms, systems builders, and device makers that benefit from lightning quick connectivity.

For our new report on how to profit from 5G, click here.