The Trigger For The Next “Green Rush”

During this coronavirus pandemic, we’re all beset by uncertainties. However, at least one thing appears certain: consumers are hoarding marijuana as if it were bread or toilet paper.

The COVID-19 outbreak is fueling pot sales, helping marijuana stocks bounce back from their brutal correction in late 2019. But investors still yearn for an event that will trigger a massive upward trajectory in marijuana equities.

The cannabis industry has enjoyed several catalysts in the past, such as Canada’s legalization of marijuana in 2018. Lately there’s been a dearth of seismic events, but now it appears we’re on the cusp of getting one.

Signs are surfacing that the leadership of the U.S. House of Representatives is moving toward holding a floor vote in September on the Marijuana Opportunity, Reinvestment and Expungement (MORE) Act. The time to act is now, before this political watershed occurs. Below, I provide a link to the best-positioned marijuana investments.

MORE lost momentum due to the pandemic and it’s been languishing in various House committees. Marijuana industry advocates in recent days have been aggressively lobbying for the bill to reach the floor for a vote. They’re apparently succeeding, which is good news for pot stock investors.

The collection of groups behind the letter calls itself The Marijuana Justice Coalition (MJC). They include the ACLU, Human Rights Watch, the Center for American Progress, the Leadership Council on Civil and Human Rights, the United Food and Commercial Workers International Union, the Immigrant Legal Resource Center, Lawyers’ Committee for Civil Rights Under Law, the National Association of Social Workers, Students for Sensible Drug Policy, and NORML.

The MJC letter states (in part):

“In the face of COVID-19, the MORE Act is needed now more than ever before. Looking towards long-term economic recovery, we must remove barriers to employment for those who have lost jobs, create new businesses and employment opportunities to help replace those that have disappeared and that will not be coming back, and to raise billions of dollars in new tax revenue to off-set the devastating economic losses to state and local governments.

Federal descheduling and expungement will drastically reduce the burden of marijuana charges and arrests in the criminal justice system. This would help begin the long overdue reversal of mass incarceration in the U.S.—which is more timely than ever in the times of mass mobilizations for police reform and in the midst of the COVID-19 pandemic ravaging jails and prisons. The MORE Act focuses on creating community infrastructure and supports that diminish contact with the criminal justice system.”

The MORE Act would federally deschedule cannabis (i.e., lift the federal criminal ban) and expunge the records of those with previous marijuana convictions. MORE would impose a 5% tax on cannabis sales, the revenue from which would be reinvested in communities most harmed by the War on Drugs.

The response of House members to the MJC letter has been overwhelmingly positive and several top lawmakers have indicated to the news media that MORE will get a vote on the floor, where passage is all but assured.

But there’s a rub (in politics, there always is). If a vote is scheduled in the House and members approve MORE, it still needs to get through the Senate where it faces a trickier fate. Senate Majority Leader Mitch McConnell (R-KY) has publicly expressed opposition to marijuana legalization.

However, as I’ve often advised you when it comes to politicians: Watch what they do, not what they say. McConnell has been engaged in closed-door meetings with marijuana industry representatives and that’s a favorable sign for MORE’s chances.

To be sure, McConnell is a social conservative. The Senator from the red state of Kentucky has earned the nickname “The Grim Reaper” for his consistent obstruction of Democratic-sponsored legislation. But McConnell also is a realist who can read the polls. A firm majority of Americans say the use of marijuana should be legal.

For decades, marijuana was demonized my mainstream politicians and religious groups in extreme terms that approached unintentional satire. Popular pejorative nicknames for marijuana have included The Devil’s Weed, Satan’s Lettuce, and (try not to snicker) The Antichrist’s Oregano.

However, in recent years, pot has made huge strides in public esteem. According to a recent Gallup poll, at least seven in 10 U.S. adults say smoking marijuana is an acceptable moral behavior. The following chart tells the story of marijuana’s redemption: 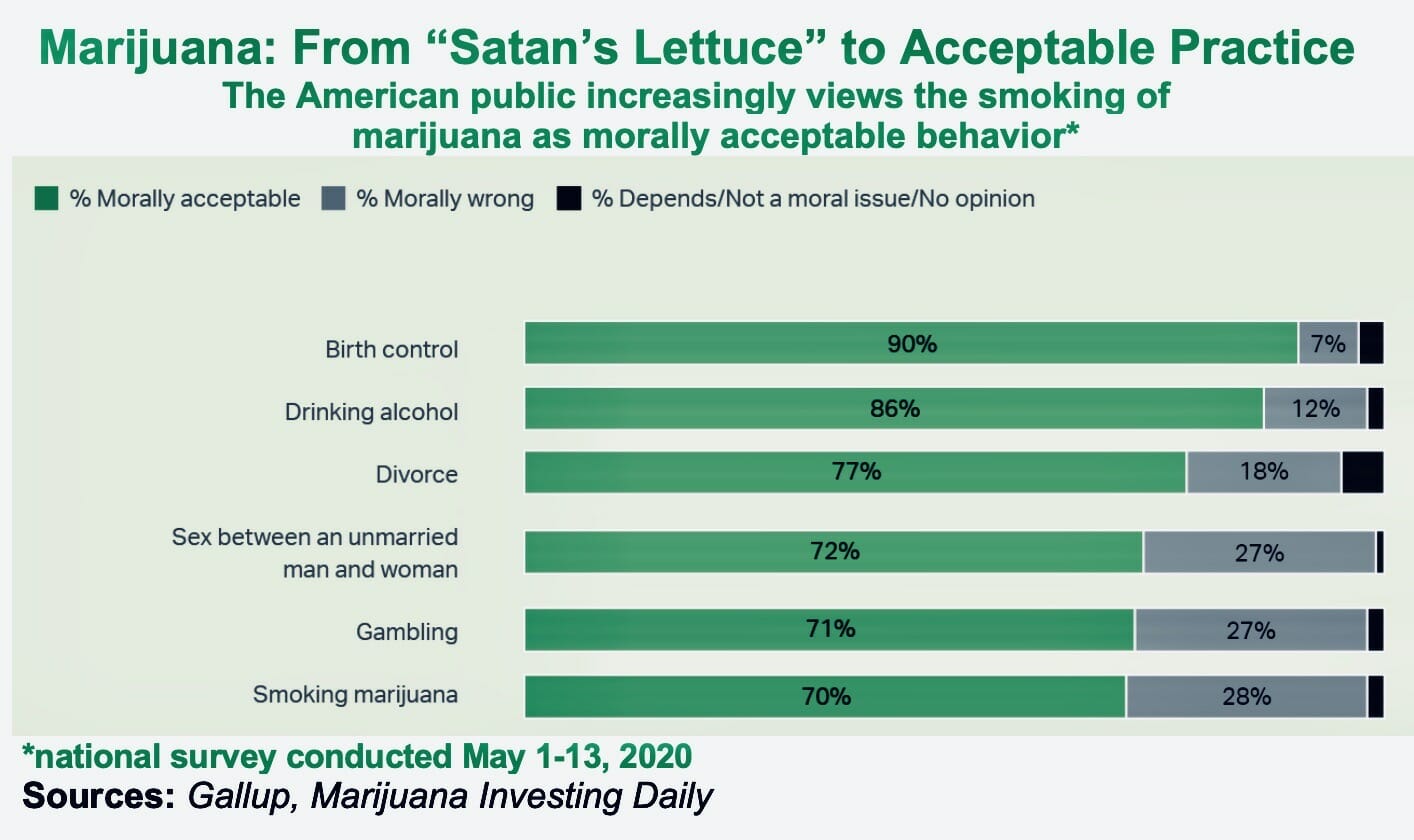 It’s not just public opinion that is likely to sway Senator McConnell. The shrewd lawmaker also is pro-business and powerful moneyed interests are pressing for the passage of MORE. The legislation would spawn greater revenue and profits among marijuana companies, in turn lifting their share prices.

And finally, it’s entirely likely that after the November 3 elections, McConnell will find himself in the minority in the Senate, if not out of a job altogether. Autumn is shaping up to be a pivotal time for the country and the marijuana industry.

In the meantime, marijuana remains one of the greatest investment opportunities you’ll see in your lifetime. The key is picking the right pot stocks. The good news is, we’ve done the homework for you. For our special report on marijuana investments, click here now.