Let’s review the year’s developments as of midsummer.

Yep, the summer of 1968 was a scary time. I was only 10 years old but I vividly recall the images of urban violence on television.

As I survey the similarly tumultuous events of 2020, I’m reminded of the often-quoted malapropism of baseball legend Yogi Berra: “It’s deja vu all over again.”

By 1968, economic growth and the stock market had been rising, with only minor hiccups, for two decades. But shortly after Richard Nixon narrowly won the presidency in November, stocks tanked. The stock market started its downturn in December 1968 and bottomed out in October 1969, with a cumulative loss of 18.57% of market capitalization.

Below, I examine the market’s latest gyrations and what they portend for the second half of 2020. I also spotlight a time-tested investment strategy that steadily makes money regardless of political or economic volatility.

Among the top headlines Wednesday morning are the Senate’s deliberations over a new stimulus package and supposed progress on a COVID-19 vaccine. However, as I’ve repeatedly warned readers, Congress is gridlocked on providing further stimulus and hopes for an imminent vaccine constitute “magical thinking.”

It appears that the $1 trillion pandemic aid package unveiled Tuesday night by Senate Majority Leader Mitch McConnell (R-KY) is dead on arrival. Democrats rejected it out of hand as too stingy and leading members of McConnell’s caucus are pushing back because they think it’s too profligate.

Meanwhile, as reflected by misses in recent days by blue chips, you should expect a dismal second-quarter earnings season.

Another ominous sign is the dip in consumer confidence in July, as coronavirus cases soar in the U.S. Sunbelt and economic hardship continues.

According to the Conference Board’s survey released Tuesday, consumers are pessimistic about the economy’s prospects over the next six months. The Index now stands at 92.6 (1985=100), down from 98.3 in June. The decline in confidence comes as extended jobless benefits are set to expire on July 31 (see infographic). 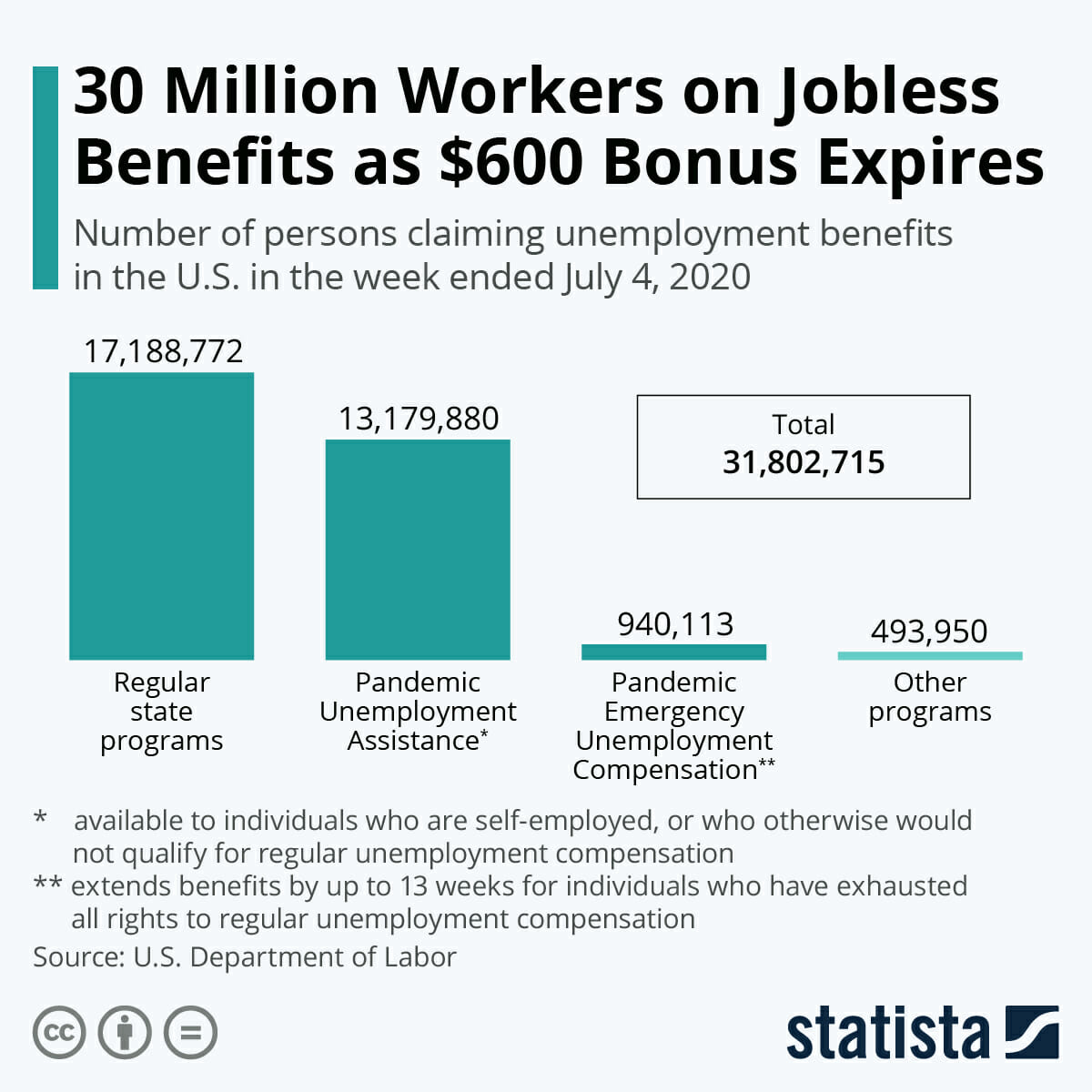 Even if a fractious Congress somehow manages to pass a stimulus bill in the near future, it will likely contain a greatly reduced unemployment benefit. Missed housing payments and small business bankruptcies are on the rise.

Under these conditions, it’s highly likely that the stock market will experience a correction before the end of the year. Overpriced mega-cap technology stocks appear to be the most vulnerable. These Silicon Valley stalwarts will prosper in the post-COVID world, but their valuations are out of whack with current economic realities.

In their iconic 1969 recording “Gimme Shelter,” the Rolling Stones sang: “Yeah, a storm is threatenin’ my very life today. If I don’t get some shelter, Lord, I’m gonna fade away…”

The Stones may have been singing primarily of emotional rather than physical shelter, but the refrain could easily apply to today’s stormy investment climate.

Besides washing your hands and wearing a face mask, what can you do to survive the coronavirus pandemic? To protect your wealth, I suggest you consider the trading techniques of my colleague Jim Fink, chief investment strategist of our premium trading service Velocity Trader.

Jim has developed a scientific way to quickly and predictably multiply the gains of regular stocks. His technique works in up or down markets, in economic expansions or recessions…in normal times or during pandemics.

Called the Velocity Profit Multiplier (VPM), Jim’s proprietary investing method allows you to jump into trades with complete confidence because you know that when share prices move in the right direction, VPM will juice up your returns by 100%, 300%, even 800%…every time…in less than a month. Without fail. Even better, this scientific system turns around these profitable trades in 60 days or less.

Jim Fink is currently setting up his next trades, but there’s no time to lose. For all the details, click here now.