When This Expert Speaks, Investors Listen

When Dr. Stephen Leeb speaks, smart investors take heed. I’ve worked with Dr. Leeb, on and off, since 1992 and I’ve always been impressed by his encyclopedic knowledge and analytical vision.

Dr. Leeb is the chief investment strategist of The Complete Investor and Real World Investing. Dr. Leeb also is a financial author and wealth manager. He is a recurring guest on CNN, Fox News, and Bloomberg TV.

Dr. Leeb [pictured here] earned a B.S. in Economics from the Wharton School of Business, and a Masters in Mathematics and a Ph.D in Psychology from the University of Illinois. In 2016, his name was floated as a possible Federal Reserve Chair. 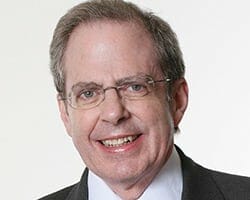 Dr. Leeb has authored research papers on psychology and statistics in the peer-reviewed journal Psychological Reports. His ninth and latest book, due out later this year, is China’s Rise and the New Age of Gold: How Investors Can Profit from a Changing World (McGraw-Hill).

I managed to carve out some time in Dr. Leeb’s busy schedule to interview him this week. Let’s see what he has to say about current events and their effects on the investment world. My questions are in bold.

Economists generally believe that the worldwide recession of 2020 will be followed by a sharp recovery in 2021, with the world more or less picking up from where it left off prior to the coronavirus pandemic.

I agree with part of this analysis: 2021 will see renewed economic growth. But it’s unlikely to be a simple return to the status quo ante. The pandemic will leave a permanent mark. It will mean that the bulk of growth will come from developing economies of the East and that will make growth stronger than most expect. Two investment implications are surging commodities and a rising emphasis on renewable energies.

The East’s faster recovery will hasten a shift in which a rising portion of global growth comes from developing Eastern economies. The significance is that growth in developing countries is inherently more commodity-intensive than growth in the developed world.

As growth in the developing world accelerates, it will bring into focus fundamental scarcities of commodities. This shift from West to East, and the impact on commodities, is something I saw as inevitable and often wrote about well before COVID-19 emerged. But the pandemic will seal the deal and speed it up as the uneven effects of COVID-19 on the world give China ever freer rein in funding and financing Asian infrastructure.

Your remarks bring to mind China’s burgeoning Belt and Road Initiative (BRI). What are the ramifications of BRI for investors?

BRI is fostering infrastructure creation in developing Asian, African, and other Eastern countries as well as in several developing Latin American countries. It’s estimated that BRI countries contain about 65% of the world’s population and account for roughly 33% of the world’s gross domestic product.

In creating an expansive range of infrastructure, from high-speed rail to electric grids to 5G networks, in large portions of the developing world, BRI aims to establish broad-based connectivity among developing nations, linking them through trade and financial and security arrangements.

By a wide margin, BRI is the largest infrastructure project ever, many times larger than the Marshall Plan initiated by the U.S. to put economic legs back under the European countries decimated by World War II. The U.S. has bad-mouthed BRI and attempted to offer competing projects, though on nowhere near a comparable scale. BRI will accelerate global growth but it’s also a way for China to project “soft power.” The following chart shows BRI’s scope. 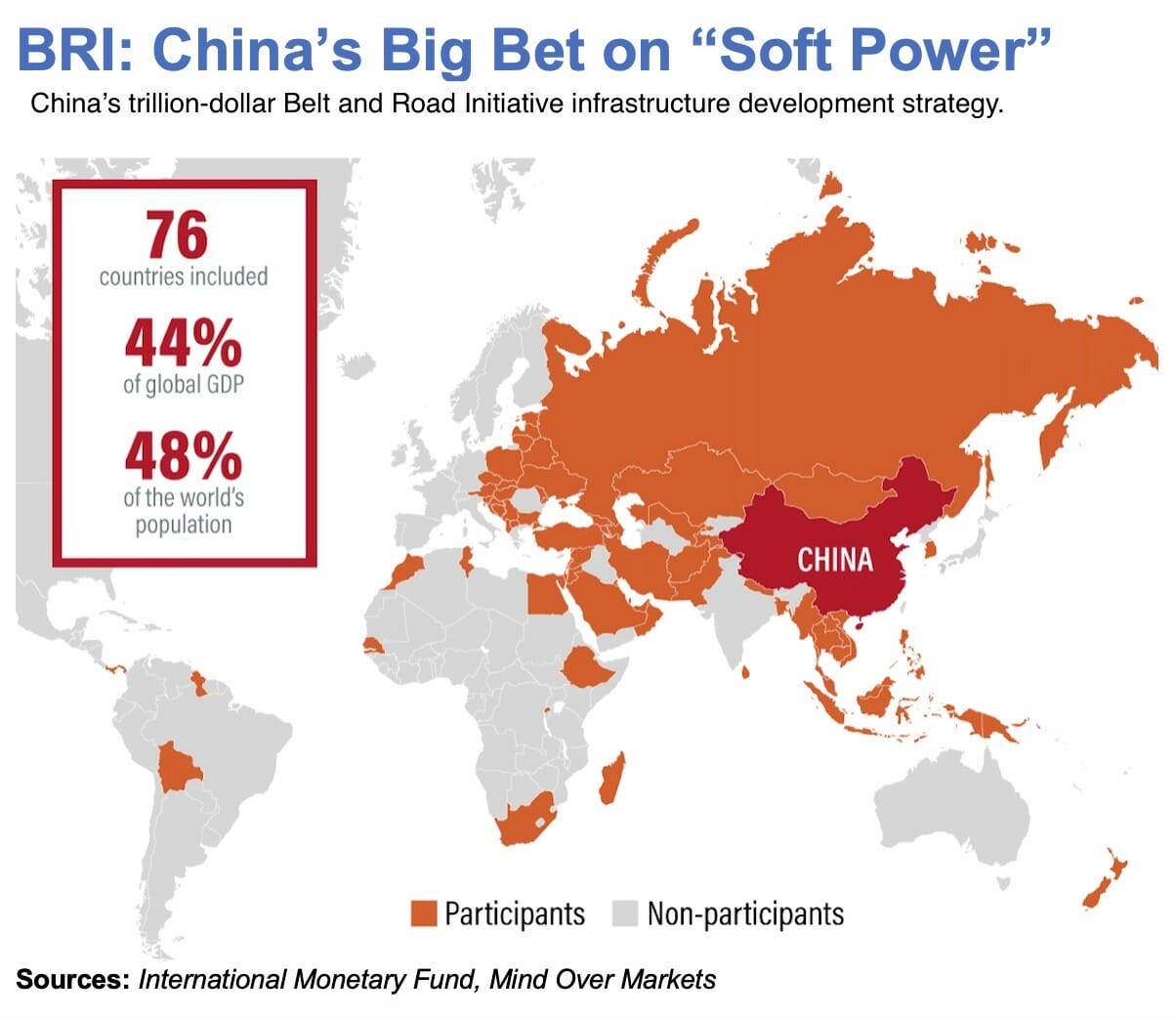 China recently earmarked $7 trillion for new infrastructure spending, $1 trillion of which it will spend this year. The target for spending the entire $7 trillion is likely 2025. Some will be spent in China, the rest in other BRI countries. Overall BRI infrastructure needs this decade will approximate $30 trillion.

About 80% of China’s newly planned infrastructure projects will go to commodity-intensive projects. The other 20% will focus on new technologies such as 5G wireless, artificial intelligence, the Internet of Things, and various quantum and space projects.

We’ll remain dependent on fossil fuels for several more years, but their dominance is clearly waning. To what degree are renewables gaining influence?

Solar and wind, although they currently supply just a small fraction of the world’s energy needs, are the world’s fastest-growing energy sources, and that will remain the case. Other energy sources such as hydroelectric, geothermal, and nuclear also have a role to play but of necessity one that’s limited.

One catch is that scaling up wind and solar, as well as further developing other clean energy sources like hydroelectric, will require using stored hydrocarbon energy sources. In other words, even as renewables play a rising role in powering growth, oil will continue to be essential.

Is there enough stored energy available to get us through the transition to a world powered largely by renewables? There’s no hard and fast formula to give us an answer. As a result, along with commodities and renewables, a related crucial investment area is energy conservation. After all, energy conserved is energy that does not have to be developed.

While rising sales of electric vehicles will reduce the use of oil for gasoline, oil will continue to be refined into the petrochemicals that are the basis for rubbers, synthetic fibers, plastics, fertilizers, adhesives, brake linings, electrical components and insulators, and many other products the modern world depends on. It is no surprise that growth in petrochemicals is expected to far outweigh growth in gasoline over the next generation and more.

As Steve discussed, a battleground in Sino-American competition is 5G, the fifth generation of wireless technology that will unleash a quantum leap in productivity.

We’ve put together a new presentation on investment opportunities in 5G. Click here for the full report.