One Toke Over the (State) Line

When it comes to state marijuana laws, Congress wants to keep federal law enforcement from stepping over the line.

Probably the most crucial provision is the one that protects states from DOJ interference. Marijuana industry leaders have been accusing the DOJ of exceeding its authority and trampling on sovereign state laws. They allege that Attorney General William Barr is using the DOJ as a blunt instrument to persecute canna-businesses, because of his personal animus against pot.

“My colleagues on the Congressional #CannabisCaucus and I were also able to include an amendment that protects individuals who engage in the state-sanctioned use, production, and dispensing of cannabis to those over age 21 from prosecution by the Department of Justice.”

The fiscal year 2021 appropriation bill now moves to the Senate, which is less friendly to marijuana than the House. The fate of the marijuana-related provisions is uncertain.

Illinois is indicative of booming pot sales in other states. The pandemic is clobbering the overall economy but it’s simultaneously fueling marijuana sales, as anxious consumers hoard weed and several states designate cannabis companies “essential services” that can remain open even amid general lockdowns.

Let’s take a quick look at other marijuana legal developments, from coast to coast at the federal and state levels.

A new Congressional Research Service (CRS) report, published last week, says a “decline in U.S. demand for Mexican marijuana” is in large part “due to legalized cannabis or medical cannabis in several U.S. states and Canada, reducing its value as part of Mexican trafficking organizations’ portfolio.”

Lawmakers in Mexico are currently crafting legislation to legalize marijuana, arguing that allowing the weed into the consumer mainstream would undercut illegal drug trafficking cartels in the country. These organized crime groups are particularly vicious and murderous, putting severe strains on Mexican society.

The CRS report lends empirical weight behind an argument long made by advocates for marijuana legalization, to wit: making pot legal is an effective way to take a bite out of organized crime. Advocates in the U.S. for federal legalization are closely watching Mexico’s efforts on pot.

Florida regulators are considering allowing medical cannabis recommendations to be made through telemedicine on a permanent basis.

North Dakota marijuana activists working on a proposed legalization ballot measure for 2022 say they already have about half of required signatures.

Rhode Island Gina Raimondo (D) said she will continue to push marijuana legalization. Rhode Island (aka “Little Rhody”) is home to the nation’s greatest marijuana use, by percentage of population (see chart). 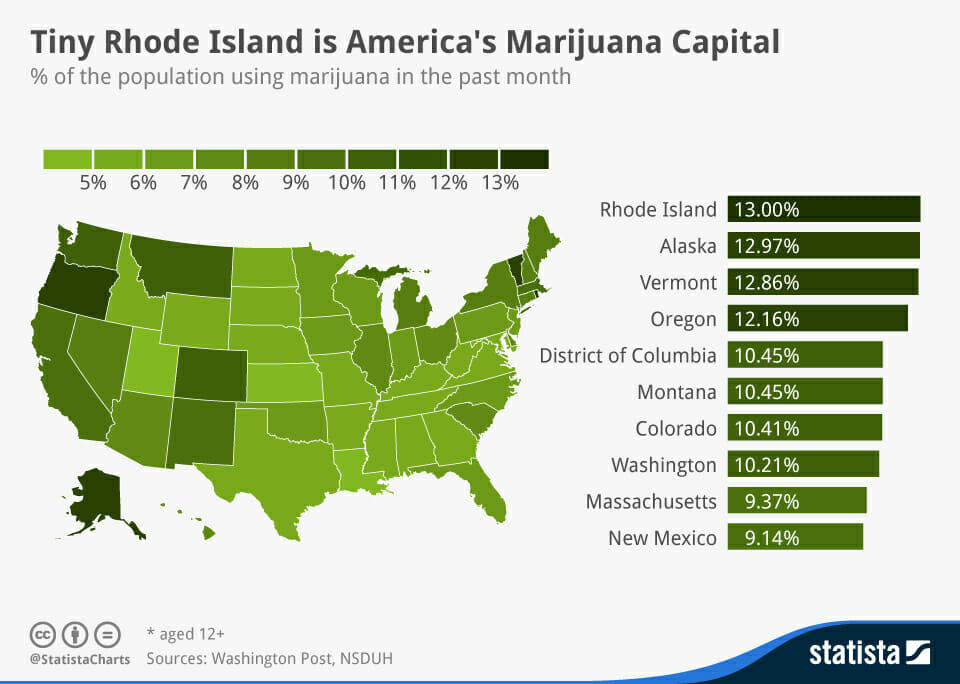 In Vermont, the Senate and House approved different versions of a bill to legalize and regulate marijuana sales. Possession and cultivation of marijuana already is legal in the Green Mountain State. A conference committee was appointed to harmonize the bills. The House speaker said the legislature will continue its deliberations on the marijuana bill throughout August.

Editor’s Note: As this article makes clear, marijuana is a permanent fixture in the nation’s political dialogue and consumer culture. Pot continues to make headlines.

Looking to profit from all of the “buzz” over marijuana? Every retirement portfolio should have at least one marijuana stock. The problem is finding the right marijuana investment. Some pot stocks are poised to make investors rich. Others are destined to go belly up.

Our stock-picking experts have unearthed hidden gems in canna-business that most investors don’t even know about. In fact, they’ve pinpointed one entrepreneurial biotech that’s on the verge of becoming the “Pfizer of Pot.” For our latest research on the best marijuana stocks, follow this link.