The Coolest Tech Trend You Never Heard Of

Family members often come to me for investment advice; it’s an occupational hazard. As with many millennials, my son-in-law Ron is a tech-savvy guy who invests in cryptocurrencies. He asked for my advice the other day on crypto and here’s what I told him: invest in crypto “pick-and-shovel” plays, not the highly risky currencies themselves.

The best play of this sort, I told him, is blockchain technology. With the soaring NASDAQ composite as a backdrop, I devote today’s column to opportunities in blockchain applications. The blockchain is the “next big thing” in the investment world but most investors aren’t tuned in.

Since the stock market’s coronavirus-induced lows of late March, the tech-heavy NASDAQ composite has been on a tear and hitting new records. The NASDAQ on Tuesday climbed 0.35%, to close at the lofty level of 10,941.17. The Dow Jones Industrial Average and S&P 500 also closed in the green. Stock futures Wednesday morning were trading higher.

In the vanguard of the NASDAQ’s rise are mega-cap technology companies that are benefiting from greater demand generated by the coronavirus pandemic. Quarantined consumers are relying on Big Tech more than ever, for teleconferencing, mobile apps, cloud-based data storage and retrieval, cashless payments systems, virtual reality, streaming entertainment and news, and online shopping.

But the advent of blockchains is largely ignored by the mainstream media, which is all the better for investors who like to get in front of game-changing developments.

From my recent discussions with Silicon Valley technologists, I’m discovering how social media is melding with new technologies such as cryptocurrency and blockchains.

The next generation of social networking is emerging. Websites are springing up whereby all data and uploads exist on the blockchain instead of on centralized servers.

By decentralizing and encrypting all data and uploads, this new breed of website aims to eliminate hacking and invasions of privacy. The most advanced of these next-gen social networks will contain their own native cryptocurrency to be used for purchases. We’re witnessing the birth of a new form of e-commerce.

This proprietary digital money can be used to buy goods and services from other users, purchase ad spaces, donate to crowd funding — you name it. For social media, these capabilities will represent another wave of disruptive technology that shakes the technology status quo to its core.

Technologists are now working on new cryptocurrencies designed for use within secure and private decentralized social networks. These networks feature an integrated marketplace and ad platform.

The “disruptive” power of blockchains…

Blockchains represent the technology that makes cryptocurrency possible. But there’s more to blockchains than Bitcoin (BTC).

Unless you live in a cave, you know that cryptocurrencies are a digital means of monetary exchange that are secured by encryption, with no physical representation of the “money.” The exchanges are recorded in what are known as blockchains, which make up the underlying infrastructure supporting the currencies.

The point is that blockchains have a multitude of uses and likely represent a dynamic growth area within tech. Blockchains have the potential to add to the growth of many established and inherently strong companies.

According to research group Statista, worldwide spending on blockchain solutions is expected to grow from $1.5 billion in 2018 to an estimated $14.4 billion by 2023 (see chart). 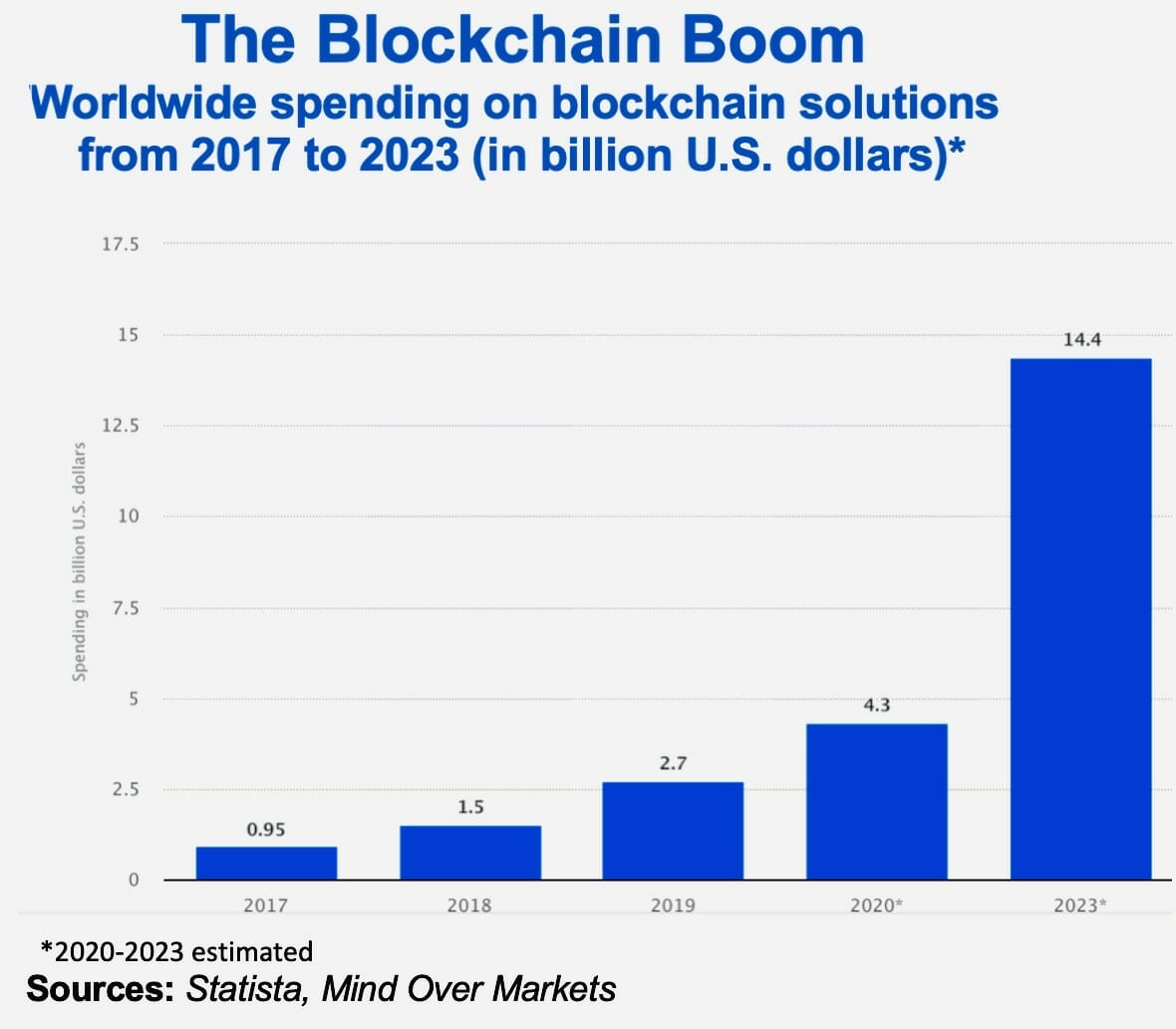 One key to spotting the beneficiaries is to recognize that blockchains require an incredibly large number of calculations, requiring extremely sophisticated software and either supercomputers or a large network of computers.

Another key is to focus on companies that have already committed to using or are considering using cryptocurrencies or other applications of blockchains, because these companies will be able to leverage the advantages of blockchains for a competitive edge.

We’re now seeing the emergence of social media ecosystems that use blockchains, whereby members of the social network can safely exchange cryptocurrency and engage in other commercial activities.

This trend spells opportunity for makers of ultra-sophisticated chips, especially graphical processing units (GPUs), that are used by blockchains. These GPU chips allow a computer to present graphics.

Blockchains have other uses. They let businesses store encrypted data in a ledger. Blockchains are used in finance, supply chains, and data storage. This gives the makers of GPUs for video games additional prospects in commerce.

Read This Story: The Kind of Cloud That Rains Money

Major corporations are discovering genuine utility with blockchain technology and its development remains a key strategic direction for the developers of the technology as well as the end users.

These networks provide the capability whereby users can integrate blockchain applications with the cloud services and tools of their respective organizations, to manage shared business processes. Increasing numbers of enterprises are using blockchain technology for their social media sites, turning them into e-commerce platforms as well.

All of which brings me to another exciting tech trend that’s revolutionizing our lives: the global roll-out of 5G wireless technology.

With its massive bandwidth capabilities, 5G is expediting the development of blockchain technology, as well as the seamless web of interconnectivity known as the Internet of Things. Want to learn more about 5G and how to profit from it? Follow this link for our special report.