A rule-breaking doofus with zero initiative, the Spicoli character is a stereotype currently perpetuated by marijuana prohibitionists. As he says in the movie: “All I need are some tasty waves, a cool buzz, and I’m fine.”

That’s funny, of course. But it’s also a caricature.

A new study strikes a blow against the harmful preconception that marijuana will turn our nation’s youth into lazy slackers. It’s important for marijuana investors that these biases get debunked.

An extensive new report, released August 3 by Colorado state officials, found that youth marijuana use in the state “has not significantly changed since legalization” in 2012.

The report supports similar conclusions from studies previously conducted in other states. Evidence continues to mount that ending the prohibition of marijuana for adult use hasn’t fueled a significant increase in overall use among middle school and high school students.

The biennial Healthy Kids Colorado Survey shows that 20.6% of high school students and 5.2% of middle school students reported past 30 day cannabis consumption in 2019. For the high school category, that’s 1.2 percentage points higher compared to the most recent biennial survey in 2017, but it’s still lower than the last pre-legalization report in 2011, when that group’s consumption rate was 22%.

It’s not just the Rocky Mountain State. In a study released July 2019, researchers from Montana State University, University of Oregon, University of Colorado–Denver, and San Diego State University scrutinized states that had legalized marijuana for recreational or medical use and the likelihood of marijuana use in the previous 30 days among high school students.

The study found that recreational marijuana laws were associated with an 8% decrease in the likelihood of teens trying marijuana as well as a 9% reduction in the odds of frequent marijuana use. At the same time, medical marijuana laws had no noticeable effect on marijuana use among teens. To reiterate, marijuana legalization resulted in a decrease, not an increase, of pot use among kids.

Paradoxically, it seems that positive examples set by parents and other authority figures who legally and responsibly use weed are achieving the goals that the “just say no” contingent couldn’t achieve. Psychologists suggest that when marijuana is illicit, it becomes more attractive to rebellion-minded teens (hence pot’s enormous appeal to the counterculture during the 1960s).

Seniors get off the couch…

Colorado researchers also revealed positive health news for older Americans who use marijuana. A new study released on July 1 of older Americans (over age 60) found that cannabis consumers tended to perform more formal exercise and undertake more physical activities than non-consumers during the course of a four-month trial.

The study, conducted by the University of Colorado at Boulder, asserts:

“Compared to older adult nonusers, older adult cannabis users had lower [body mass index] at the beginning of an exercise intervention study, engaged in more weekly exercise days during the intervention, and were engaging in more exercise-related activities at the conclusion of the intervention.” See the following chart: 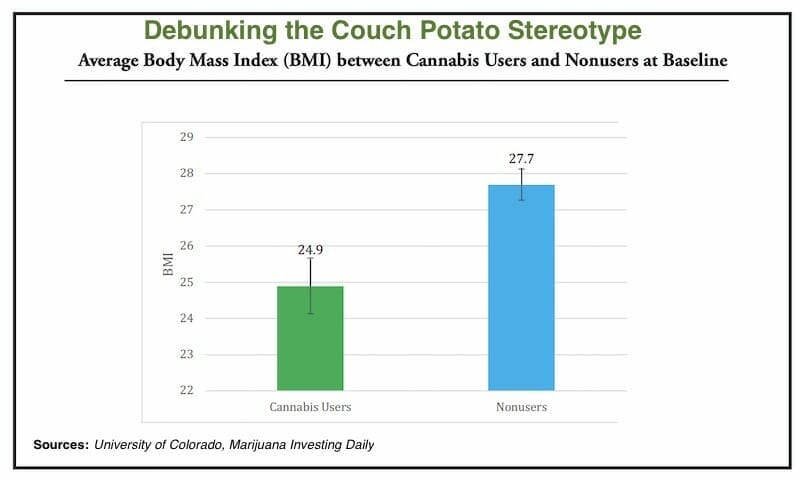 And yet, pot prohibitionists continue to push back against legalization, insisting that marijuana destroys physical health and personal initiative. Their arguments against cannabis normalization are continually debunked by the scientific data, but that doesn’t mean they haven’t quit trying. In particular, officials in the Department of Justice recently were accused by marijuana advocates of unfairly persecuting cannabis companies.

I often get nervous queries from marijuana investors, asking if the political tide could turn against the industry. My contention remains steadfast: the increasing legalization of marijuana is an unstoppable trend.

Pot investors should take heart from the fact that we’re now witnessing the most marijuana-friendly U.S. Congress in history. It’s only a matter of time before marijuana prohibition is removed not just by the states, but also by the federal government. Several bills are currently pending in Congress that would lift federal restrictions on pot.

Federal and state lawmakers increasingly embrace marijuana legalization, which in turn creates an enormous multi-year tailwind for the cannabis sector. With Congress resuming action on marijuana legislation in the second half of 2020, marijuana investments are poised to soar. For the best pot plays now, follow this link.