Welcome to my video presentation for Monday, August 10. In the article below, I provide greater detail for the topics discussed in the video. At the bottom of the article, I also steer you toward an investment opportunity that takes profitable advantage of the stock market paradox we’re currently witnessing.

The dictionary defines the word paradox as “a seemingly self-contradictory proposition that when explained may prove to be true.”

The stock market has embarked on a powerful rally since late March, despite a severe economic crisis. That’s a self-contradictory proposition, but it’s true.

Stocks last week continued to enjoy bullish momentum, as small-caps rose to add breadth to the post-crash rally. Technology stocks retained their strength, boosted by second-quarter earnings results that surprised on the upside. The NASDAQ reached all-time highs, yet again. The following table tells the story: 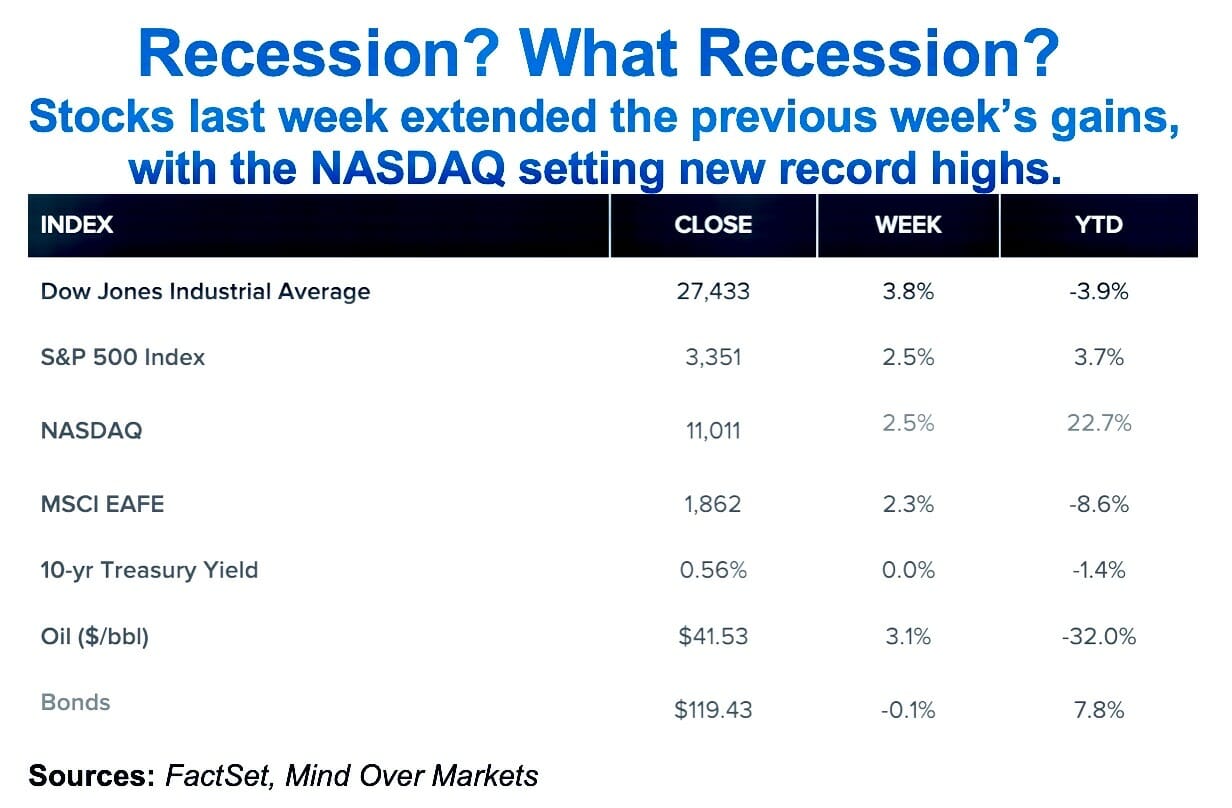 Overseas equities also have been rising in recent days, amid better-than-expected manufacturing data from the U.S., Europe and Asia. But the global recovery is painfully slow and we still have far to go before we reach pre-pandemic levels of production and employment.

Last Friday’s U.S. jobs report from the Bureau of Labor Statistics (BLS) showed that the unemployment rate dropped from 11.1% in June to 10.2% in July, and 1.8 million more people were employed in July than in June.

Time to pop the Champagne, right? Um, no. For the most part, these aren’t new jobs. Nearly all of the people returning to work were on temporary layoffs.

After three consecutive months of falling unemployment, we still find ourselves at levels of joblessness that resemble the nadir of the Great Recession (see chart). 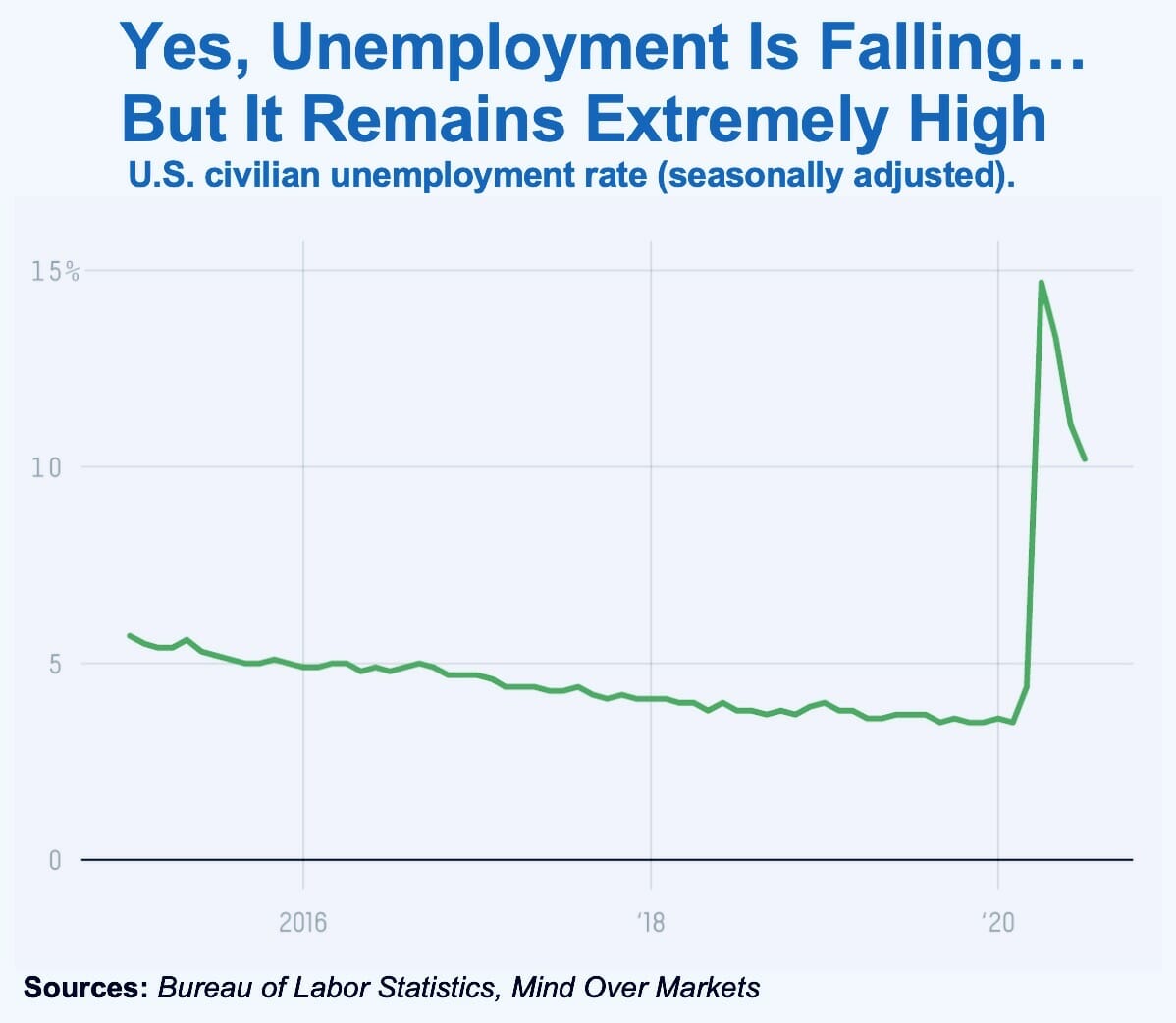 Unemployment continues to decline, but from stratospheric heights. The coronavirus-era unemployment rate peaked at 14.7% in April, which actually was closer to 20% due to what the BLS called a “misclassification error.”

The economic rebound continues, but it’s moving at a snail’s pace. What’s more, the latest jobs reading is a snapshot taken before several states were compelled to reverse reopenings due to a resurgence of the coronavirus.

The U.S. COVID-19 death toll rose last week, for the fifth straight week. As of this writing Monday morning, the U.S. has experienced nearly 163,000 deaths from the virus. Some health experts say the official statistics under-count the real number of deaths. The U.S. set a record for coronavirus cases on Saturday, with more than 5 million people now infected.

Among the 45 countries with more than 50,000 COVID-19 cases, the U.S. currently has the eighth-highest number of deaths per 100,000 people. Until the pandemic is contained, the economy can never achieve a sustainable recovery. The U.S. jobs market hasn’t caught up with pre-pandemic levels, not by a long shot (see chart). 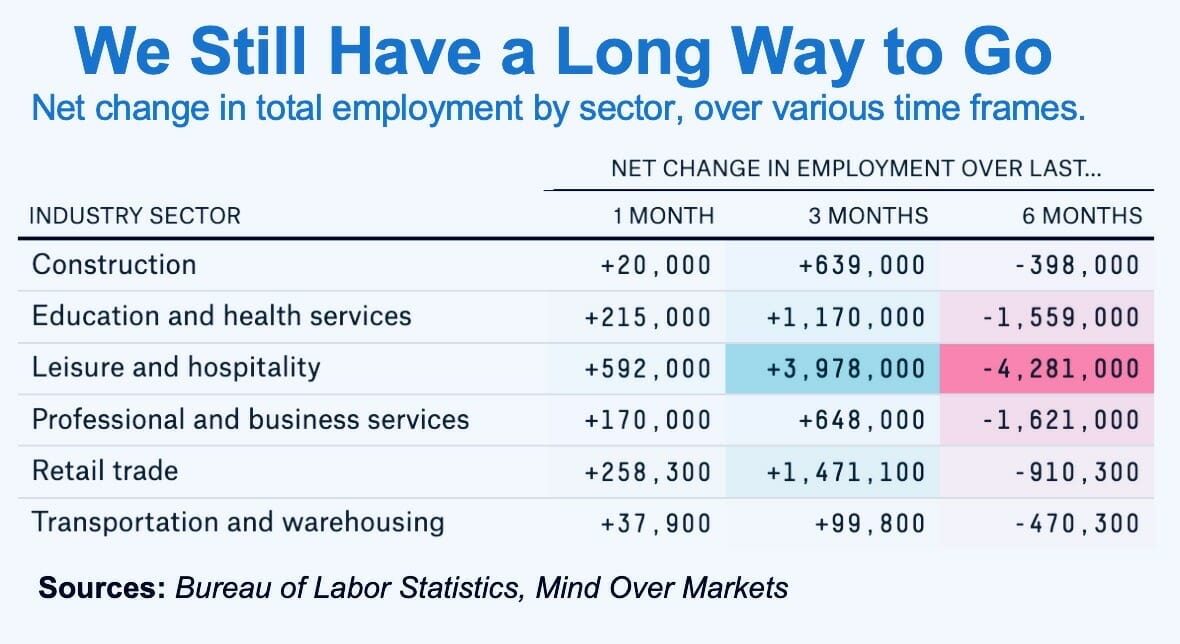 The economic recovery already appears to be slowing. The improvement in unemployment numbers from June to July was significantly less than the one from May to June.

A serious risk to the economy is the inability of the White House and Congress to reach an agreement on another coronavirus rescue package. Fiscal stimulus talks broke down last Friday, so our nation’s leaders did what comes naturally to them. They left town for the weekend.

President Trump over the weekend signed executive orders (e.g., to defer payroll taxes) in lieu of relief legislation. These orders are likely to get challenged in court and, even if enacted, are limited in their ability to help the economy.

The gridlock in Washington already is spooking Americans. According to a national “weekly pulse” survey conducted by the U.S. Census Bureau, more than a third of renters said at the end of July that they had little confidence they’d be able to make their August rent.

The Census survey also found that a growing number of people expect a member of their household to lose employment income. These findings serve as an “anxiety gauge” and leading indicator. Reminiscent of the 2008 meltdown, Americans are once again losing their homes.

Massive public sector layoffs are looming, too. States and localities face budgetary crises, but the federal government isn’t coming to their assistance. Pink slips will soon be wending their way throughout the country to police officers, fire fighters, teachers, sanitation workers…you name it.

Economic data are likely to deteriorate. In the week ahead, the docket of market-moving economic reports is crowded. Keep an eye on the Producer Price Index (Tuesday); the Consumer Price Index (Wednesday); the weekly jobless claims report (Thursday); and consumer sentiment, retail sales, and industrial production (Friday).

Fact is, central banks around the world are propping up the financial markets. A decline in real wealth, an increase in corporate and private debt, and plunging household income are the economic realities.

The equity markets are on a sugar high, courtesy of the Federal Reserve, but this high will eventually wear off. Policymakers are eager to inflate the asset bubble until…well, until the November 3 election is over.

I truly believe we face a great economic revival in 2021, with technological innovation such as 5G wireless leading the way. But before we get there, the latter half of 2020 could get ugly.

Turn to the Midas method…

You need to be proactive and take defensive measures now. One time-proven hedge is gold. The conditions that I just described are nerve-wracking for investors but manna for the Midas metal.

About 5%-10% of your portfolio should be in precious metals such as gold. I prefer the stocks of gold miners.

To be sure, gold mining stocks entail more risk than bullion or exchange-traded funds (ETFs), because these individual companies must contend with the tribulations of running operations in sometimes unstable political environments. However, when there are profits, they tend to be big.

Looking for the best gold mining stock? Our investment team has found a small-cap “rocket stock” that’s poised to blast off, but most of Wall Street hasn’t even noticed the company.

The time to invest in this gold mining play is now, before the rest of the investment herd catches on. Click here for details.

Questions or comments? Send your correspondence to: mailbag@investingdaily.com