A subtle but discernable shift in the stock market got underway during the past week. Several of this year’s best-performing stocks have dropped considerably even though the overall stock market has broken even.

Further below, I’ll explain to you what I think that means. But first, let’s take a look at some of the odd behavior I’ve been noticing. Consider biotech lab Novavax (NSDQ: NVAX), a company I profiled in May when its share price was $42. On August 10, NVAX crested above $181 before falling below $113 over the next two days. 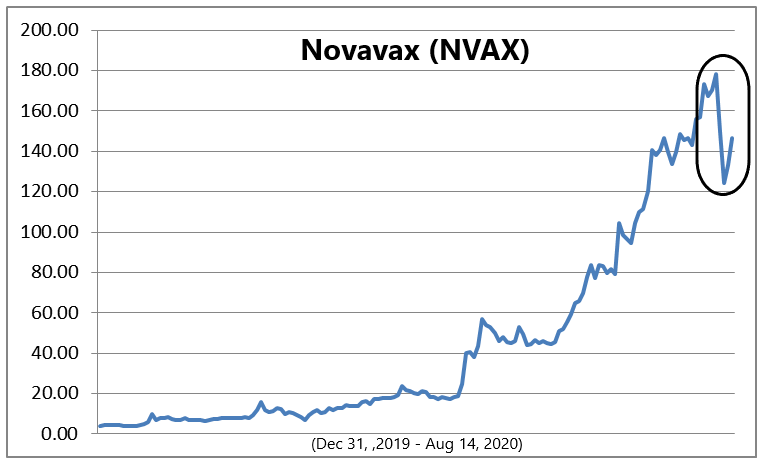 Novavax is working on a vaccine for COVID-19 that is close to gaining approval from the U.S. Food and Drug Administration. So is Moderna (NSDQ: MRNA). Last week, Moderna disclosed that the U.S. government agreed to buy 100 million doses of Moderna’s COVID-19 vaccine candidate.

The big drop in NVAX after that news was announced is understandable. More confusing is Moderna’s slide later that day after its share price initially popped 11% on the news. At the end of the day, MRNA was 15% below its peak price the week prior.

Another stock retreating rapidly is Stamps.com (NSDQ: STMP), which I reviewed two months ago when its share price was near $180. By August 7 it was trading above $325 after the company released better than expected Q2 results the day before.

A few days later, STMP had fallen below $255. Since there was no additional news to explain the sudden reversal in sentiment, perhaps it was nothing more than profit-taking. Even at that price, the stock had more than doubled in value since the stock market bottomed out in March.

There appears to be a lot of profit-taking going on recently. It could be argued that taking profits in relatively small and unknown companies such as Novavax and Stamps.com is prudent. Stocks that small do not enjoy widespread support so their fortunes can change suddenly.

That same argument can’t be used for mega-cap tech stocks such as Apple (NSDQ: AAPL) and Amazon.com (NSDQ: AMZN). They are the two most valuable publicly traded companies in the world and among the most widely followed.

And yet, at the same time Novavax and Stamps.com were getting their comeuppance, Apple and Amazon were backtracking, too. To be sure, their shareholders have been handsomely rewarded this year. Apple is up nearly 50% in 2020, while Amazon has gained closer to 60%.

Last week may have only been an anomaly. If so, then all four of those stocks may soon resume their upward trajectories.

Troubling signs are popping up everywhere. Many schools systems have recently reversed course and elected to continue remote education this fall. Two of college football’s “power conferences” have postponed fall sports until the spring.

Until now, the thinking has been that the coronavirus pandemic will shift how money is spent, but not how much is spent. Instead of eating at restaurants, diners will have that food delivered to their homes instead. Shopping online has replaced an afternoon at the mall.

However, the steep drop in U.S. gross domestic product (GDP) in June should serve as a wake-up call to anyone that believes COVID-19 will not extract an enormous cost on the overall economy.

For that reason, I believe the stock market will trend lower over the remainder of this year. The easy money has already been made. Now, it’s time for the smart money to go to work.

For companies that have seen their share prices appreciate greatly, soon may be the perfect time to use that stock as currency to acquire other businesses.

Make no mistake about it; this is a buyer’s market. The “haves” are worth more than they have ever been while the “have nots” are fighting for survival.

For that reason, it’s not hard to figure out who the likely acquirers will be. They have more capital than they know what to do with.

Some of them will use that financial largess to repurchase their own stock. Others may increase their quarterly cash dividend payments.

But for the ones looking to grow through expansion, the economic environment has never been better to make a deal. They can borrow money at historically low interest rates or swap their stock while it is at historically high levels.

If you want to make a lot of money in the stock over the remainder of this year, I suggest you look for companies that are likely to be acquired.

Depending on the sector, the average premium to get a deal done over the past couple of years hovers in the 15% – 40% range. And with money so cheap these days, I suspect premiums will be higher than that.

That’s why I think you should take a look at what my colleague Nathan Slaughter is up to these days.

As chief investment strategist of Takeover Trader, Nathan is an expert on mergers and acquisitions and corporate takeover initiatives.

Nathan is adept at digging up the inside data on pending takeovers. Along those lines, he’s about to go on camera to reveal a startling development. If you watch his presentation and follow his advice, you could reap huge market-beating gains.

Nathan intends to answer the most urgent questions for investors in the second half of 2020:

Nathan will lift the curtain on the one hidden asset that’s about to attract $4 trillion of cash from America’s richest CEOs. These powerful insiders have pinpointed a future bonanza and they’ve decided to go “all in.” This is your chance to join them. To lock in your free spot for Nathan’s “Project Rainmaker” expose, click here now.