Welcome to my video update for Monday, August 17. In the article below, I amplify my remarks.

Trading typically slows during these lazy days of summer vacation, when paperback bestsellers replace The Wall Street Journal as favored reading. But don’t get too comfortable in your hammock. As I explain in today’s video, indicators suggest that the economic downturn could worsen and topple stocks.

For the moment, at least, we’re enjoying a robust rally in stocks. Nearly five months after the bear-market low on March 23, the S&P 500 closed the past week within striking distance of its all-time high.

International stocks led the charge last week, reflecting the implementation from overseas central banks of aggressive stimulus measures as well as a general containment of the coronavirus. Europe and Asia have gotten a handle on the pandemic whereas it continues to rage in the United States.

As you can see from the following chart, it was a good week for the MSCI EAFE exchange-traded fund (the acronym stands for Europe, Australasia and Far East). What’s more, oil prices rebounded, as production curbs offset demand fears. 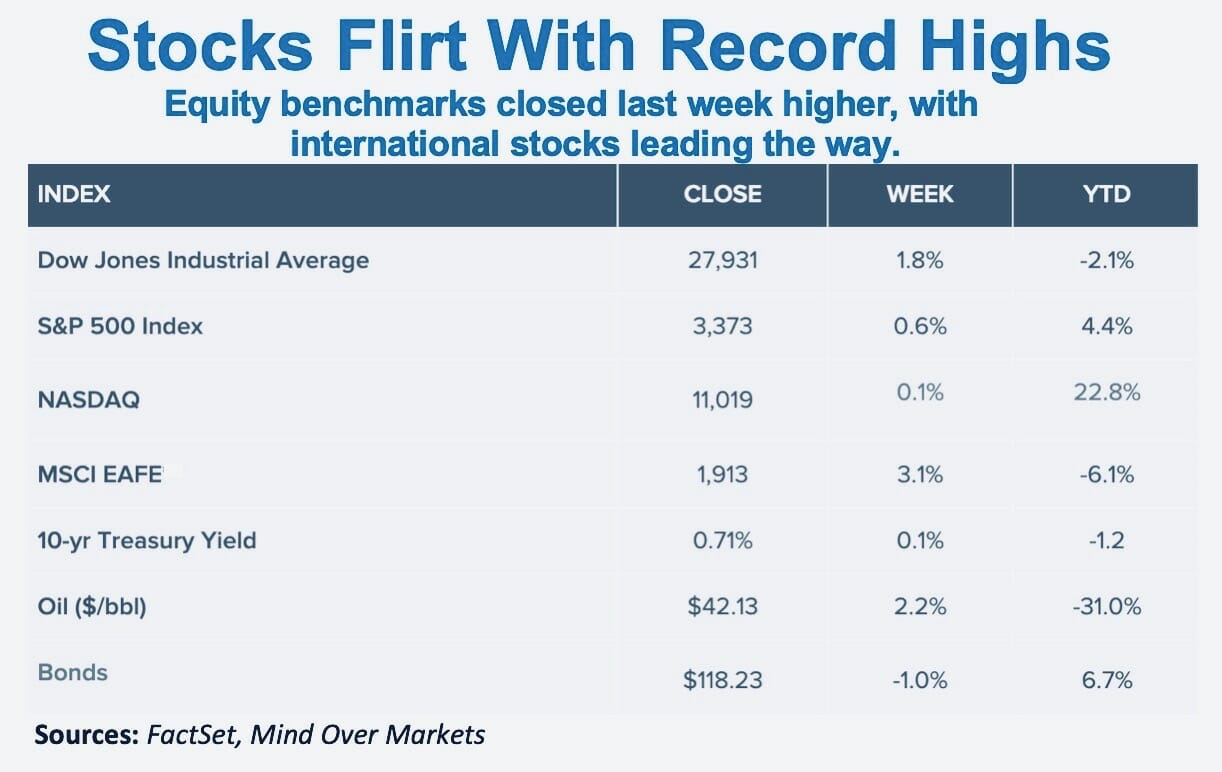 The rally in equities is certainly welcome but as stocks flirt with record highs, it raises troubling questions.

The Labor Department reported last Thursday that initial filings for unemployment insurance dipped below 1 million for the first time since the virus-induced economic lows of March.

However, as the following chart shows, the unemployment emergency is far from over. Claims still hover above the highest rate of the 2008 financial crisis. 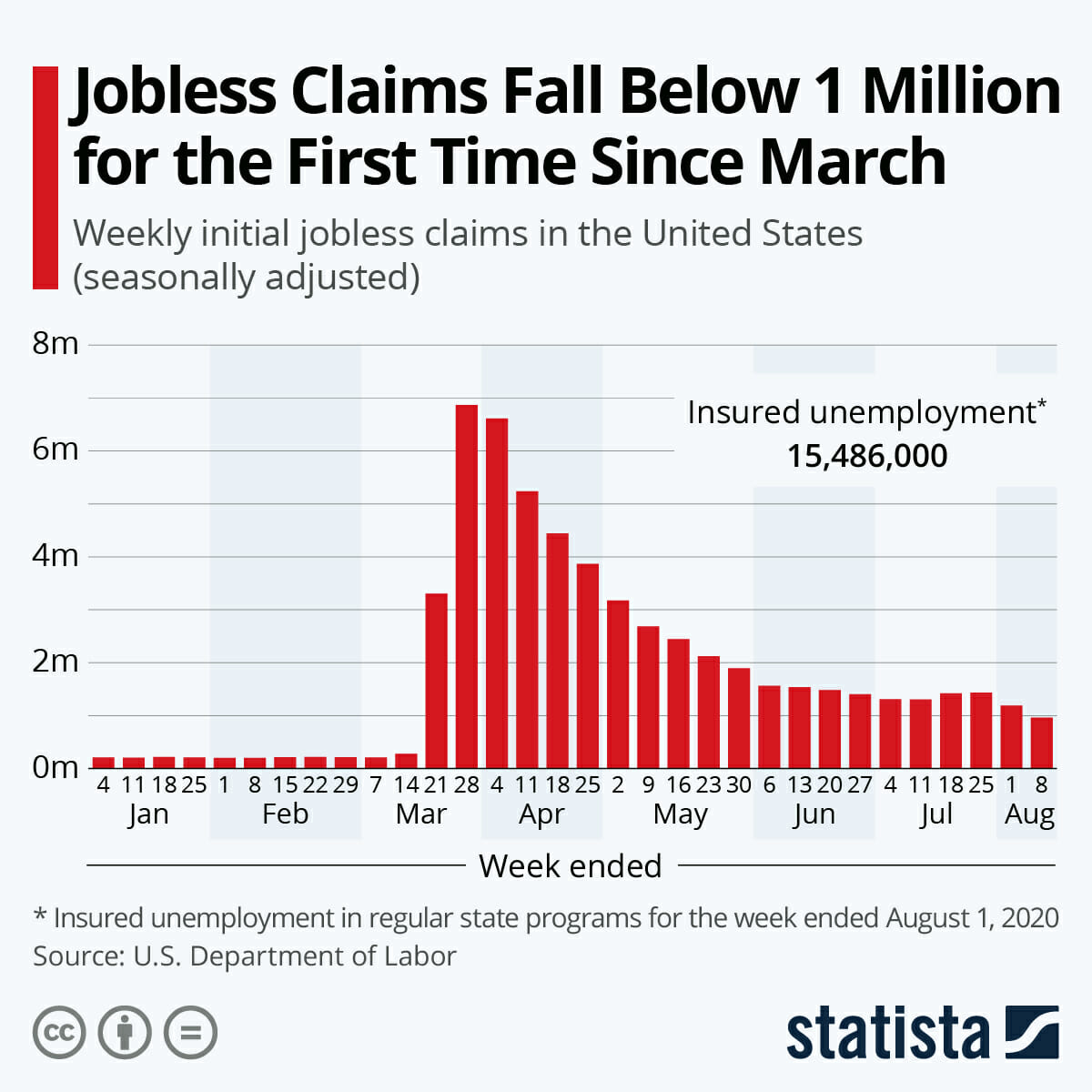 Government relief is nowhere in sight. The Democratically controlled House passed a $3 trillion aid package in May. Republicans, who control the Senate, want a greatly scaled back version in the range of $1 trillion. The Democratic version is friendlier to workers; the GOP version favors business. The ideological chasm has been too wide to bridge.

Unless lawmakers decide to negotiate from their beach homes and golf carts, don’t expect a new coronavirus relief bill before autumn.

The House and Senate have adjourned until September without passing a new fiscal relief package. Top relief legislation negotiators in the White House also left town for vacation.

Fact is, Congress works an average of 2.5 days a week. Unlike the rest of America, the average member only shows up for the job Monday evenings through Thursday afternoons. When I was a congressional staffer during the Reagan Era, I remember that the refrain among my colleagues wasn’t TGIF…it was TGIT.

The Federal Reserve’s monetary stimulus, which has mostly helped global large-cap corporations, remains generous and steadfast. But millions of average American workers face financial calamity. This dichotomy will eventually come around to clobber the economy and by extension the stock market.

About three-fourths of U.S. gross domestic product is consumer spending and consumers can’t spend if they’re broke. An analysis released in July under the auspices of JPMorgan Chase (NYSE: JPM) stated that if Congress did nothing, unemployed people would slash their spending by a third.

Unemployment benefits comprise about 15% of total wages. According to the JPM report, dropping the federal supplement “could cause substantial declines in aggregate demand and potentially negative effects on the macro-economy.”

Retail sales rose 1.2% last month after rising 8.4% in June, an indication that they’re in a downward slide. Analysts had expected an increase of 1.9% in July (see chart). 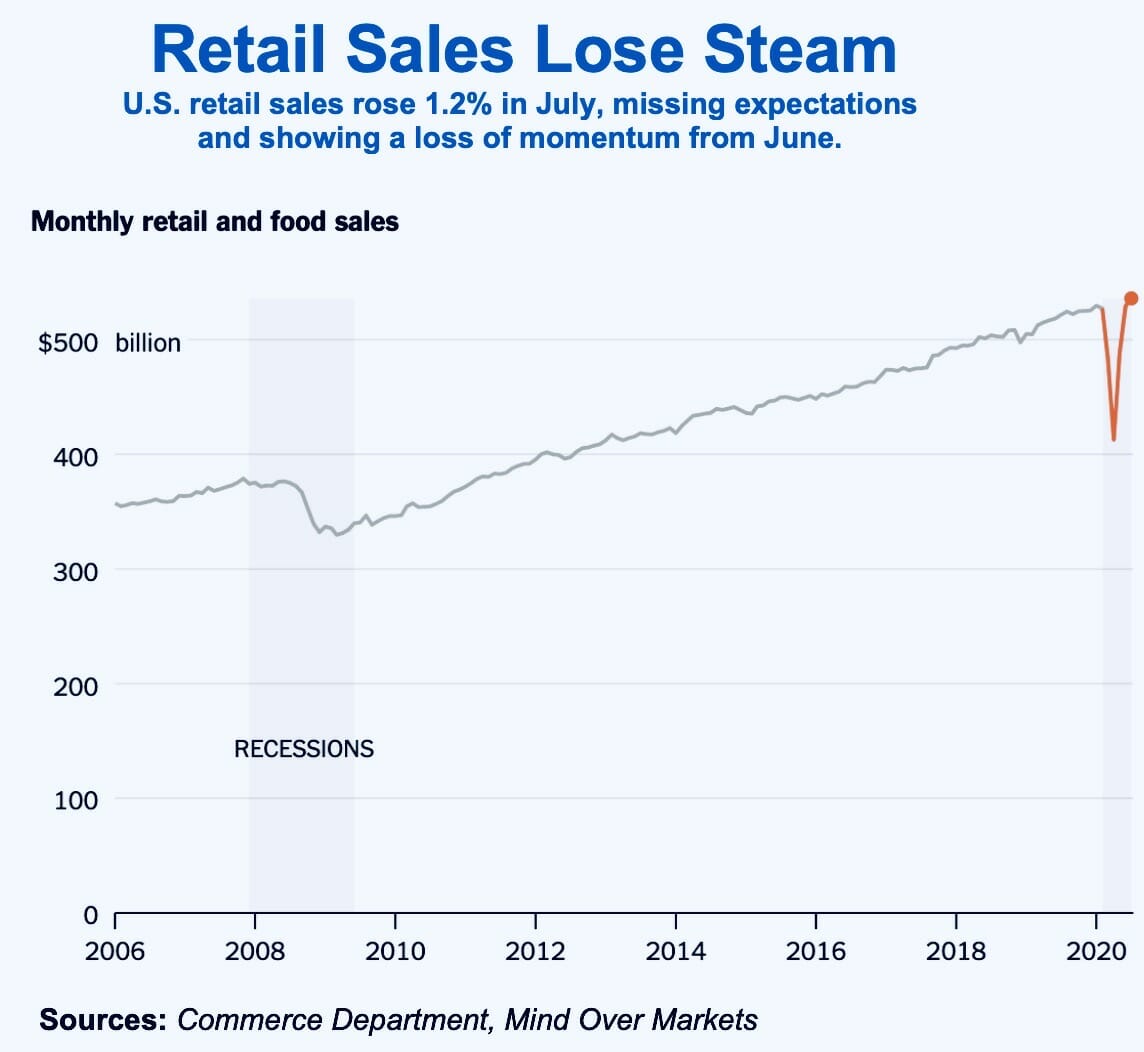 Other storm clouds are gathering. With tax revenues plummeting, states could face a cumulative budget gap of $555 billion through the 2022 fiscal year, according to the non-partisan Center for Budget and Policy Priorities. The center also found that one-in-five renters have fallen behind in rent during the pandemic.

On the positive side, the bullish case is bolstered by the recent surge of small- to mid-cap stocks. Since the broader stock market’s coronavirus lows in late March, the overall rally has been mostly fueled by large-cap stocks, predominantly in the technology sector.

However, in the wake of better-than-expected Q2 earnings results, the smaller fry have been playing catch up over the past month, as reflected by the surge in the Russell 2000. 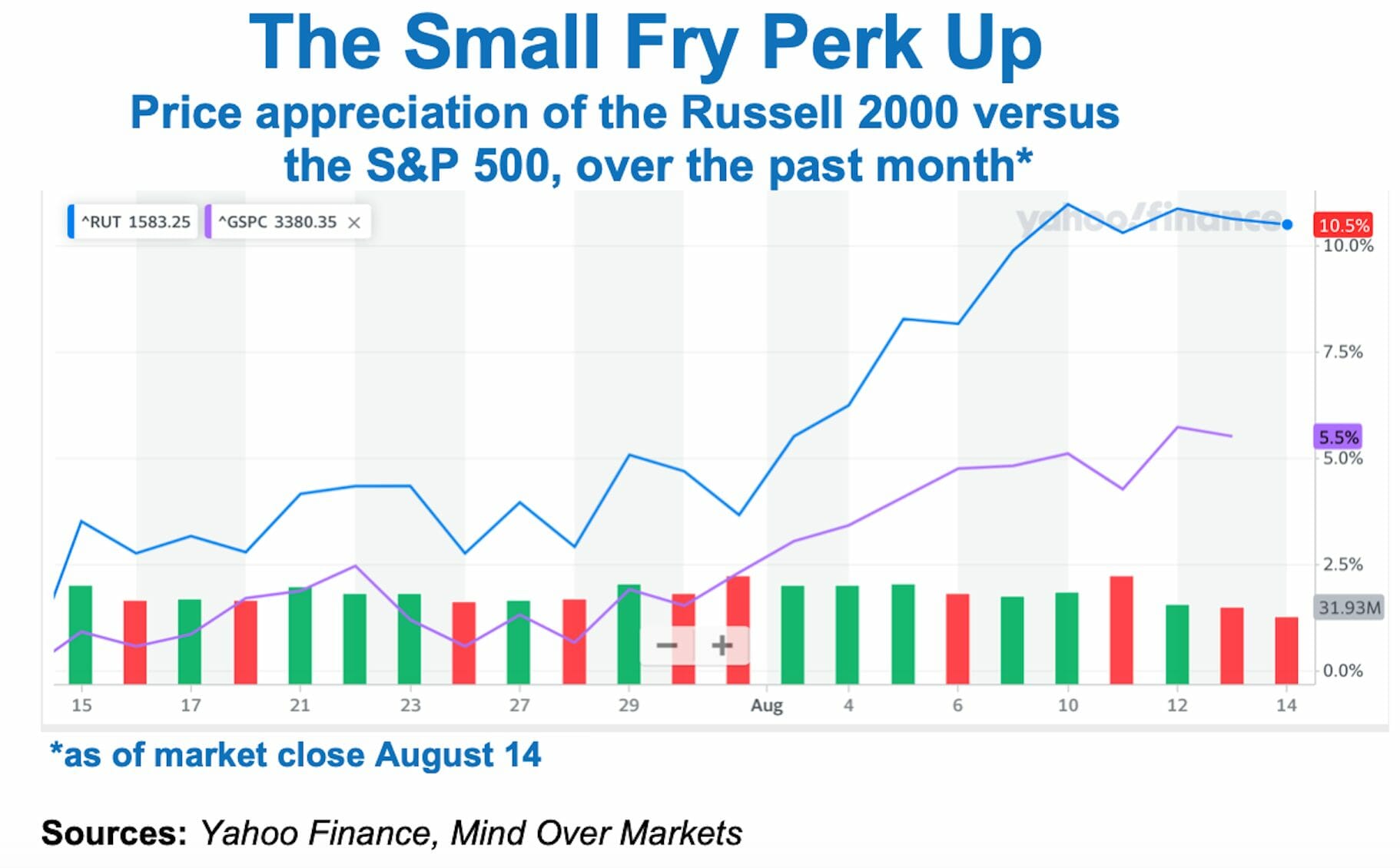 The rise of small- and mid-cap stocks adds breadth to the rally. And therein you’ll find a window of opportunity, if you act now.

We’re seeing the first inklings of a wave of deal-making, as cash-rich large-cap companies gobble up small-cap companies that are showing strength but still trade at reasonable prices.

The pandemic is serving as a catalyst for corporate consolidation. No one understands this dynamic better than my colleague, Nathan Slaughter.

As chief investment strategist of Takeover Trader, Nathan is an expert on mergers and acquisitions and corporate deal-making.

Nathan is adept at digging up the inside data on pending takeovers. Along those lines, he’s about to go on camera to reveal a startling development. If you watch his presentation and follow his advice, you could reap huge market-beating gains.

Nathan will lift the curtain on the one hidden asset that’s about to attract $4 trillion of cash from America’s richest CEOs. These insiders who occupy the upper echelon of power have pinpointed a future bonanza and they’ve decided to go “all in.” This is your chance to join them. To lock in your free spot for Nathan’s “Project Rainmaker” expose, click here now.