Is Redfin Running Out of Real Estate?

Six years ago, my wife and I decided to move closer to the city from the suburbs. I did a quick Internet search to find a free source of listing and sales data that would help me follow the market. That’s when I discovered Redfin (NSDQ: RDFN). Redfin is a discount real estate broker that relies heavily on technology.

The company was founded in 2004 and went public in July 2017 at $15 a share. Over the next two years, RDFN gradually declined in value despite a roaring bull market. When the stock market bottomed out five months ago, RDFN briefly traded below $10. Since then, it has roared back to life. On August 7, RDFN rose above $47 for a new all-time high. 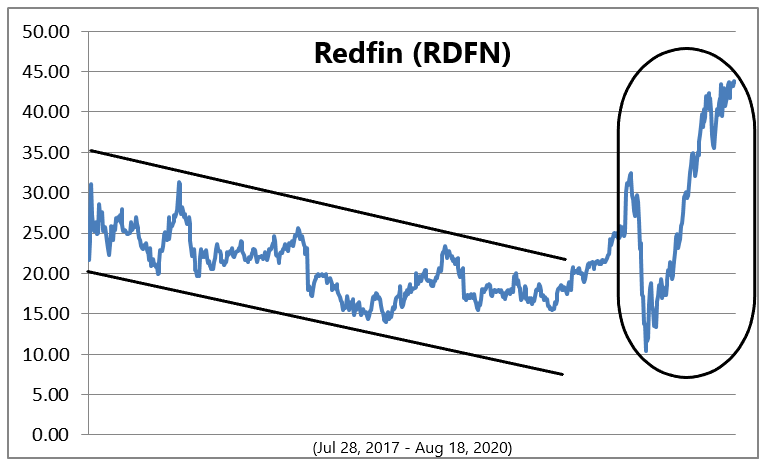 On July 30, Redfin released its Q2 results that came in better than expected. According to company CEO Glenn Kelman:

“Over the past two months, Redfin’s online visits and customer inquiries have been growing at a faster rate than at any point in the last three years. We’re inside a tornado, hiring agents, lenders and closing specialists at breakneck speed to keep up with demand, but also mindful that the bottom of the economy could fall out a second time.”

I share that concern. So far, the struggling economy has managed to avoid collapse thanks in large part to federal bailouts. However, a second wave of COVID-19 this winter could push many small businesses over the brink.

If that happens, the real estate market could suffer. A rise in unemployment almost always equates to an increase in mortgage loan defaults. In April, early-stage mortgage delinquencies (30 – 59 days past due) rose to 4.2%, their highest rate in more than 20 years.

I am surprised that the stock market is so enamored of Redfin. The company does not make a profit. Even worse, it has not grown its market share during the past year. In fact, it has actually contracted slightly.

However, Redfin is popular with millennials, who appreciate its tech-centric approach to real estate transactions. Presumably, many of them will elect to use Redfin when it comes to time to buy or sell their next home.

That rationale makes sense when it comes to smaller purchases that are easily within the financial means of young consumers. The average Amazon Prime user is 37 years old and spends about $1,400 per year.

According to the National Association of Realtors, the average residential real estate transaction for existing homes in the United States during the month of June was valued at $295,000. I’ll do the math for you; that works out to roughly 210 years worth of shopping on Amazon Prime.

Consumer behavior changes when there are big bucks involved. Dropping $300 on a new pair of shoes is extravagant but won’t ruin your retirement plans. But if you screw up a $300,000 real estate transaction, that can set you back for a long time.

For that reason, I’m not so sure that the millennial market will prove to be Redfin’s salvation. Millennials also like to crowdsource recommendations for a wide range of professional services, including real estate brokerage.

Redfin accounts for less than 1% of the national real estate brokerage market (0.93%). That means the vast majority of those crowdsourced recommendations will most likely be for another provider.

Redfin is reviled by the traditional brokerage industry, which has long relied on the traditional 6% commission structure that is split evenly between the buying and selling broker. The maximum listing fee charged by Redfin is 1.5%, half the usual amount.

If Redfin can’t gain market share by charging only half as much as its competitors while consumers are forced to transact business from home, it’s difficult to imagine that it will become profitable anytime soon. If the coronavirus pandemic ultimately drives down real estate activity, Redfin’s top-line revenue will likely shrink.

Redfin is currently priced at about 12 times book value, double the same metric at the end of 2019. The company holds $455 million in cash, roughly twice its total debt of $236 million.

Short sellers smell blood in the water and have already moved in on Redfin. Short interest in the stock was 9.6% of the float (shares trading) at the end of July.

I’m not sure who would buy Redfin, but it might make sense for the Google division of Alphabet (NSDQ: GOOGL) to consider it. A few weeks ago, I noted that Google recently acquired a 6.6% equity stake in home security company ADT (NYSE: ADT).

What better way to sell someone a complete home security package along with other Internet of Things (IoT) products than to help them buy that home in the first place? If not Google then perhaps Apple (NSDQ: AAPL) might have an interest since it competes with Google in the home IoT market.

Both Apple and Google hold roughly $100 billion in cash and could easily buy Redfin at a premium to its $4.4 billion market cap. Either company could justify the acquisition as a cost of expanding its share of the home IoT market.

I expect to see an uptick in merger and acquisition activity over the remainder of this year. Mega-cap tech stocks are worth more than they have ever been. They can use their stock as currency to get deals done.

That’s why I suggest you take a close look at what my colleague Nathan Slaughter is up to these days.

As chief investment strategist of Takeover Trader, Nathan is an expert on mergers and acquisitions and corporate takeover initiatives.

Nathan is adept at digging up the inside data on pending takeovers. Along those lines, he just revealed a startling development. If you watch his presentation and follow his advice, you could reap huge market-beating gains.

Nathan answered the most urgent questions for investors in the second half of 2020: