Small-Cap Stocks: The Little Engines That Can

Watching the virtual Democratic National Convention last night, I was given a reminder (not that I needed one) that we’re in the midst of an epochal and bitterly fought presidential election.

Our country also grapples with high unemployment, a severe economic recession, renewed global trade tensions, and a deadly pandemic that shows no signs of abating.

What’s an investor to do? When the trouble gets big, it’s time to think small.

So far this year, small- and mid-cap companies have been bringing both stability and growth to investors. Below, I explain why this category of stocks has outperformed in recent months. I also pinpoint investment opportunities that can protect and grow your wealth for the rest of 2020 and beyond. First, let’s look at the broader market backdrop.

The three main U.S. stock market indices closed mixed but mostly higher Monday. The Dow Jones Industrial Average fell 0.31%, the S&P 500 rose 0.27%, and the fired-up NASDAQ climbed another 1.00%. The S&P 500 closed just shy of its February 19 record high. Stocks on Tuesday afternoon were again trading mixed, with the Dow in the red and the S&P 500 and NASDAQ in the green.

Since its March 23 low, the S&P 500 has climbed 51%, which is a remarkable feat considering the coronavirus-caused recession. Leading the charge have been the smaller fry. During the same time frame, the Russell 2000 index of small- and mid-cap stocks has risen 58.1%.

Small-cap stocks are generally defined as having market valuations of between $300 million and $2 billion; a mid-cap hovers between $2 billion and $10 billion. 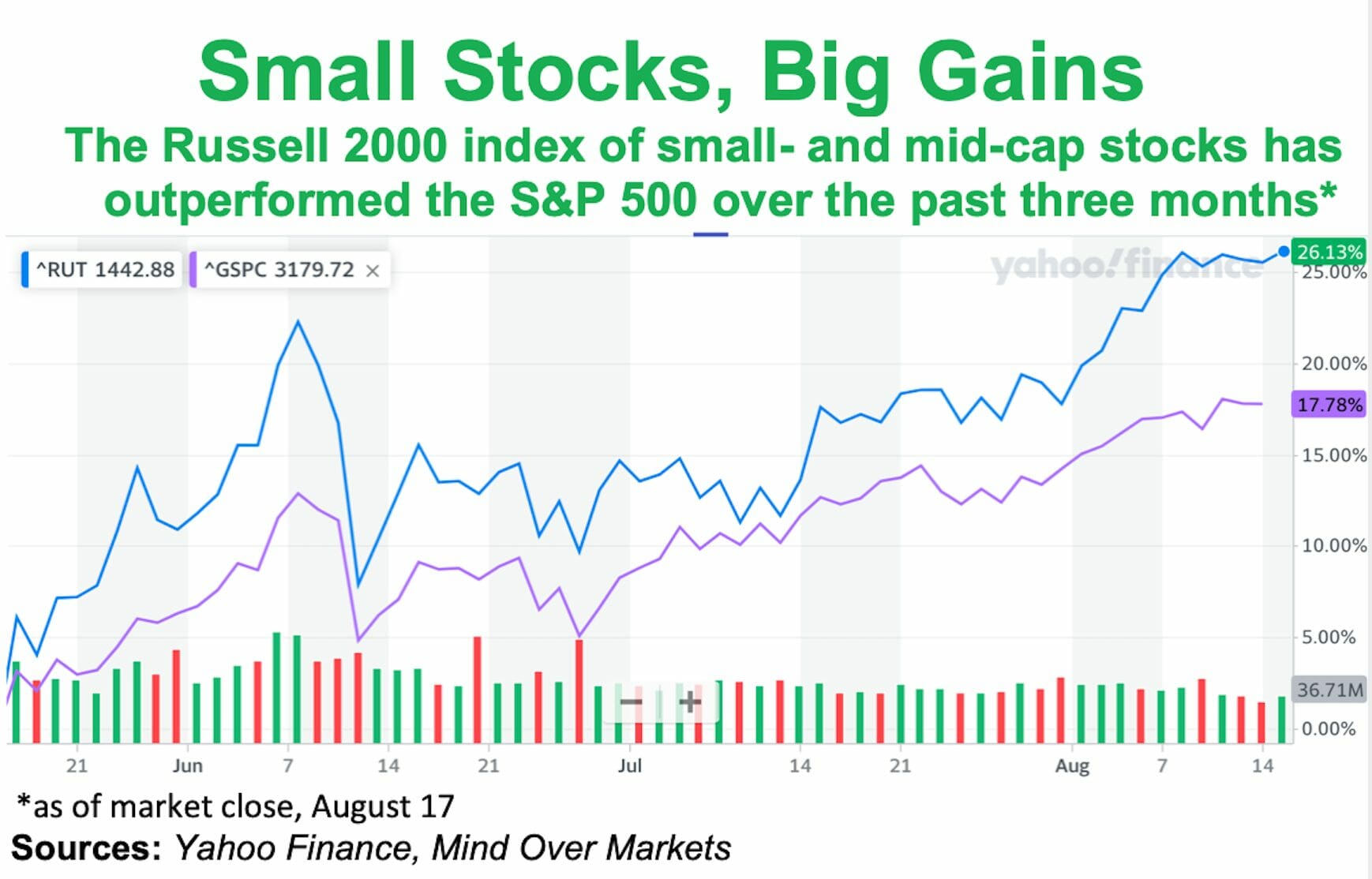 But we’ve endured lots of ups and downs along the way. The latter half of 2020 is likely to remain uncertain and risky.

Watch This Video: Will The “Dog Days” Bite Investors?

In recent days, keeping gains in check has been a stirring of the trade war between China and the U.S. The White House announced Monday that it would further clamp down on Huawei Technologies, to restrict the Chinese-based giant’s access to commercially available microchips.

As I’ve repeatedly warned you, this destructive trade war will drag on indefinitely. Even after the November 3 election is over, the U.S. and China will continue to jockey for global hegemony, regardless of who occupies the White House.

Huawei is a private company and the second-largest manufacturer of smartphones in the world, behind Samsung Electronics (OTC: SSNLF) and ahead of Apple (NSDQ: AAPL). At the heart of the battle over Huawei is the global implementation of 5G wireless technology.

In addition to enhancing civilian life, ultra-fast 5G also confers military advantages. As such, the race to deploy and control 5G entails a national security component.

China sees Huawei as an incubator for innovation. The Trump administration sees the tech giant as a de facto espionage operation.

By sanctioning Huawei, the U.S. wants to protect proprietary intellectual property, especially as it pertains to 5G. To understand Huawei’s outsized role in the global fight over 5G, take a look at the following chart: 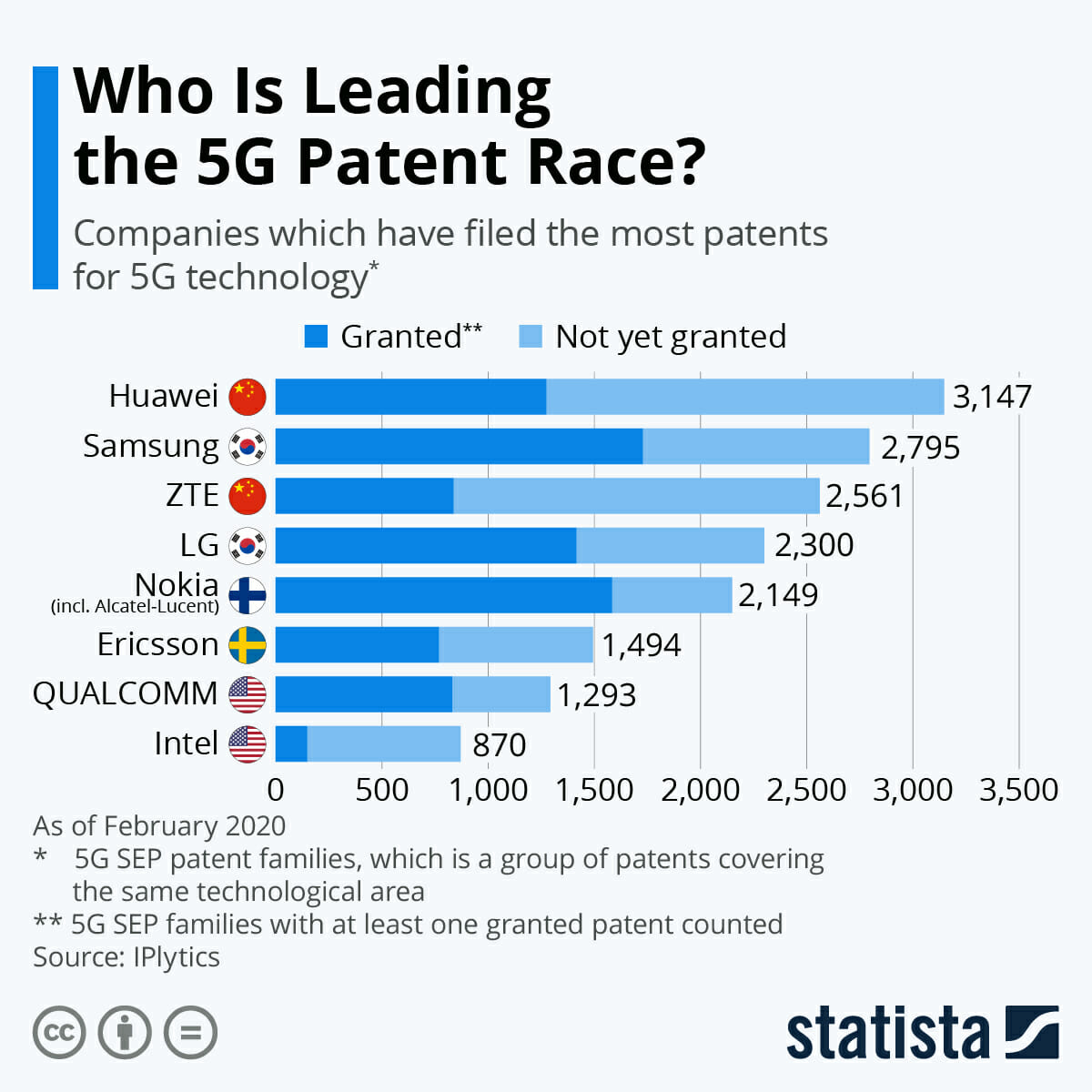 Over the long term, small-cap stocks on average have dramatically outperformed all other types of stocks. Small- and mid-cap stocks have surged in recent months on the strength of better-than-expected second quarter earnings results. They probably have further to run.

The rise of smaller equities strengthens the bullish case, by conveying greater breadth to the rally and reflecting optimism over the economy.

When overvalued Big Tech stocks finally come down to earth, the inherent strengths of small- and mid-cap stocks are likely to come to the fore.

Many of these smaller equities don’t get hyperventilating coverage on CNBC, but the media glamor of mega-cap “story stocks” can wear off in a hurry during a correction. Make sure your portfolio is properly diversified with exposure to the smaller “can do” engines of growth.

Editor’s Note: It’s late August and most of the world has fled for vacation, but don’t get too comfortable in your beach chair. Volatility hasn’t taken a vacation. In fact, it appears that a financial storm is about to hit our shores.

When it hits, weak companies and their investors will be washed away. One of our top analysts thinks the broader market could drop more than 30% over the near term.

You need to put yourself on solid ground, but that doesn’t just mean loading up on cash. I’ll show you how to protect yourself and also prosper when you click here.