During my long-haired youth in the 1970s, possession of marijuana could get you busted and tossed into the hoosegow. You also could get fired from your job, expelled from school, or at the very least grounded by your parents.

But if you live long enough, you can witness remarkable social changes. Case in point: the nation’s top cops are currently lobbying Congress to legalize pot.

The letter states: “As front-line public safety experts, we believe that responsible regulation and control of marijuana will be more beneficial to society than prohibiting and criminalizing it. The COVID-19 pandemic shines a bright light on why this kind of reform is as urgent as ever as a matter of public health, safety, and better use of much needed resources.”

In the letter, the law enforcement coalition urged passage in the House next month of the Marijuana Opportunity Reinvestment and Expungement (MORE) Act. The bill cleared the House Judiciary Committee last year and there are indications that it will reach the floor for a vote in September.

Read This Story: The Trigger For The Next “Green Rush”

“Indeed, legalizing, regulating, and controlling marijuana at the federal level is an opportunity to repair and strengthen the relationships between us and the people we serve; to shift public resources toward the most serious crimes; to reduce the size and influence of the illicit market; and to usher in an era of health-centered approaches—rather than criminal punishment—for people who use drugs.”

The letter boasts a “who’s who” of criminal justice professionals. Under the auspices of the Law Enforcement Action Partnership (LEAP) and Fair and Just Prosecution, signatories include the attorneys general of Delaware, Minnesota, New York, and Oregon. A former attorney general of Ohio also signed, as did the National Black Police Association and dozens of current and former prosecutors and police officials.

For investors, the time to act is now, before MORE passes. If you wait, the investment herd will bid up the prices of marijuana stocks that currently trade at bargain levels. Below, I provide a link to the best-positioned marijuana value plays.

The momentum behind MORE…

MORE is a comprehensive federal cannabis legalization bill and its passage would significantly boost the cannabis industry. The legislative package was introduced last year by House Judiciary Committee Chairman Jerrold Nadler (D-NY) and already has cleared his panel. MORE would achieve the long-sought goal of removing federal restrictions against marijuana.

MORE got bottled up in the House due to the pandemic but marijuana industry advocates in recent days have been aggressively lobbying for the bill to reach the floor for a vote. They’re apparently succeeding, which is good news for pot stock investors.

Support among voters for MORE is significant, according to a new survey released this month by Data for Progress and commissioned by LEAP and Fair and Just Prosecution.

The survey found that 58% of likely voters, including 54% of Republicans, think the federal government should legalize the use and sale of cannabis. When informed about the specifics of the MORE Act, support increased to 62% overall (see the following chart). 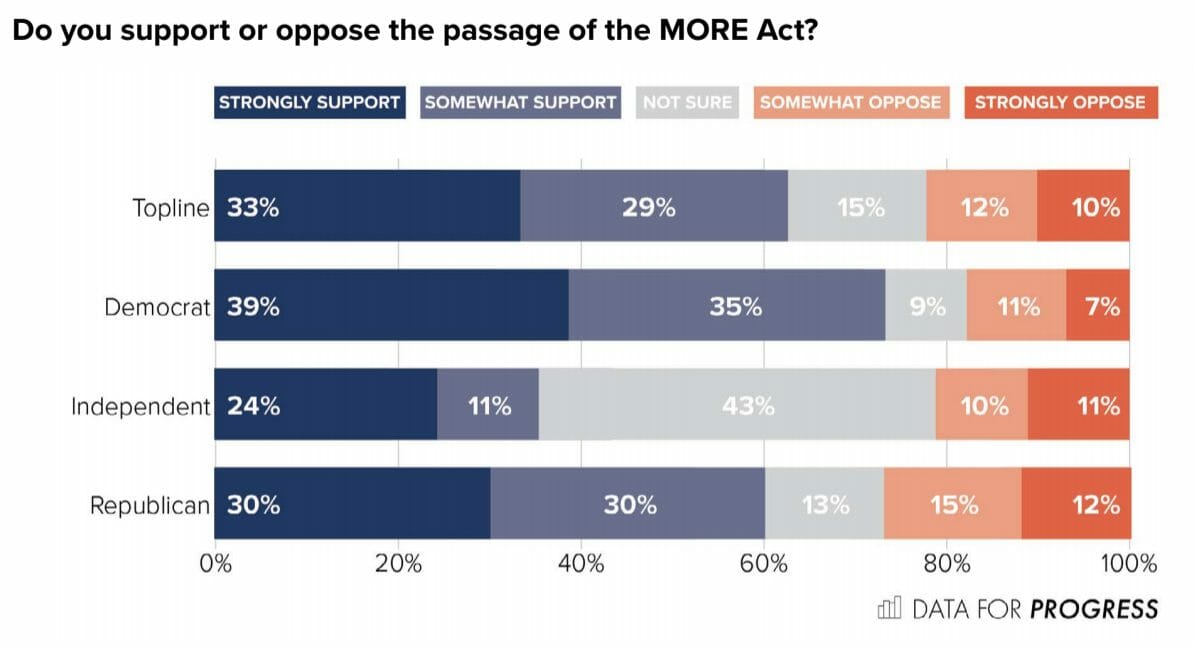 Federal and state lawmakers increasingly embrace marijuana legalization, which in turn creates an enormous multi-year tailwind for the cannabis sector. As the AG letter makes clear, even law enforcement is jumping aboard the marijuana bandwagon. Cultural attitudes toward marijuana are permanently changing, as weed goes mainstream.

Democratic presidential nominee Joe Biden, who is getting coronated this week at the Democratic National Convention, knows that marijuana legalization is popular with the public and he’s been spotlighting the topic lately. Biden has stopped short of calling for federal legalization but he does advocate the expungement of criminal records for marijuana convictions.

After getting sidelined by dire headlines about the pandemic-induced economic recession, the marijuana industry is front and center in the news again. Pot stocks are mounting a comeback, after the sharp slump they suffered in late 2019.

As risky pot penny stocks go belly up, the larger-cap players that dominate the industry have enjoyed rising sales, better economies of scale, improving cash flow, and greater market share. This industry consolidation has been bad for weak cannabis companies but beneficial for the better-financed players.

With Congress resuming action on marijuana legislation in the second half of 2020, certain cannabis companies are poised to soar. For the best pot stocks now, follow this link.