Knives Out: The Gangs of Wall Street

This year’s brutal election cycle doesn’t so much resemble democratic deliberation as a street rumble in the movie Gangs of New York. GOP Senate Leader Mitch McConnell (R-KY) recently said as much, calling the battle to control the Senate “a knife fight in an alley.”

Even when the election ostensibly concludes in November, recriminations and legal challenges over mail-in votes are likely to drag on. The Florida recount of 2000 will look like a lovefest compared to what we face in the immediate wake of this autumn’s balloting.

In coming weeks, the fight for asset protection will be no less daunting. But don’t get distracted from your overall investment strategy. Last week, the rising markets reminded us that steadfast investors are rewarded, if they’re properly positioned. Below, I’ll show you how to prepare for the sustainable recovery that will emerge after current investment dangers subside.

Stocks continue to prevail (for now)…

Last week, the S&P 500 reached a fresh high in only six months after its March 23 low. The tech-heavy NASDAQ trades at record high levels as well. Take a look at the following table, which shows a remarkable comeback year to date for the three main U.S. stock market indices: 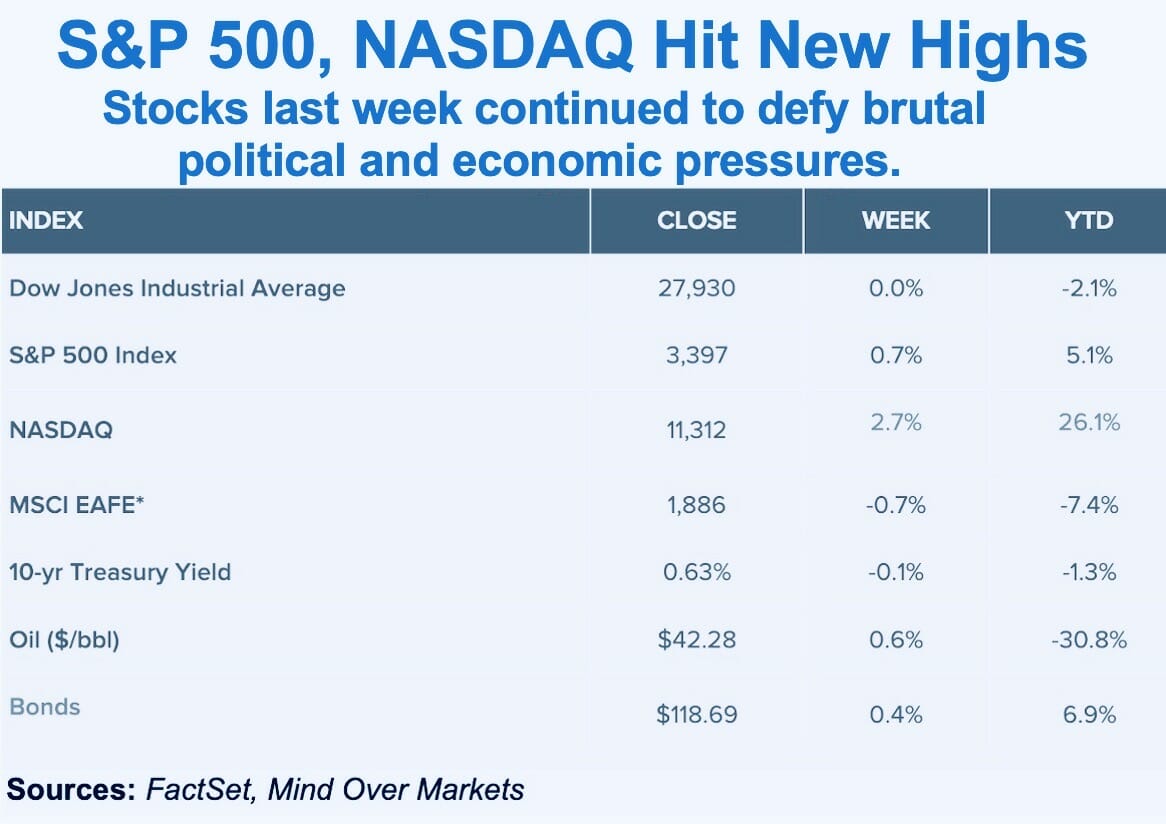 In a bright spot for the economy, the National Association of Realtors reported last Friday that sales of existing U.S. homes soared a record 24.7%, the second consecutive record-breaking month.

Quarantine has been helping tech companies, certain retailers, and even the housing market, as consumers rely on remote and virtual tools at home to work, shop and socialize. Consumers stuck at home are seeking larger domiciles. The Federal Reserve’s loose monetary policy combined with low housing inventory also are fueling the surge in home-buying.

However, unemployment remains chronically high and has actually ticked back up, as states suffering from a resurgent coronavirus reimpose lockdowns.

Weekly unemployment claims recently dipped below one million for the first time in months, but they didn’t stay below that threshold for long.

The Labor Department reported Thursday that 1.1. million Americans filed new unemployment claims last week, versus 971,000 new claims in the previous week. When claims had dipped below 1 million, the bulls cheered because it was the first time since March the number of claims had been below one million. Now that trend is going in the wrong direction.

The reported rise in new unemployment claims last week exceeded the consensus, which called for a decline to about 923,000. The high level of unemployment reflects the need for a new fiscal stimulus package, but Congress won’t return from August recess until September.

Both Republicans and Democrats remain far apart in negotiations and the contentious presidential election is heating up. Odds of a legislative compromise are slim.

We’ve witnessed the fastest bear market recovery on record, which should make you nervous. History shows that during previous bear markets since 1956, it usually takes four years on average for stocks to recover from a trough to a fresh high.

Turn to the rainmaker…

You need to maintain a diversified portfolio to survive the volatility we’ll continue to see for the rest of the year. A balanced mix of assets also will position you to benefit from the durable recovery that probably awaits in early 2021.

That’s where my colleague Nathan Slaughter comes in.

Nathan has made it his business to understand merger and acquisition (M&A) activity and he sees it accelerating in coming months.

As chief investment strategist of Takeover Trader, Nathan is adept at digging up the inside data on pending takeovers. Along those lines, he recently went on camera to reveal a startling development. If you watch his presentation and follow his advice, you could reap huge market-beating gains.