Anti-Pot Grievances Get an Airing

Listening to politicians speak at party conventions, I’m sometimes reminded of Festivus on the classic television sit-com Seinfeld. In the words of Frank Costanza: “The tradition of Festivus begins with the airing of grievances. I got a lot of problems with you people! And now you’re gonna hear about it!”

Consider the Republican National Convention this week, which has taken a decidedly anti-marijuana tone. Inveighing against pot certainly appeals to President Trump’s socially conservative base. However, polls show that the vast majority of Americans support marijuana legalization, and that includes majority support among Democrats, Republicans and independents.

It’s a reminder that marijuana prohibitionists have not given up their grievances against marijuana, contrary to public sentiment. Cannabis investors should remain aware of this headwind to industry growth. Despite the decades-long mainstreaming of marijuana, the culture wars rage on.

Before I continue, a quick disclaimer: Whether you think marijuana legalization is beneficial or immoral is beside the point. Some people refuse to invest in so-called “sin stocks,” within industries such as tobacco, firearms, alcohol, or gambling. Perhaps you count marijuana as a sin. That is certainly your right. But if you’re motivated to earn money, know this: the marijuana industry is a multi-billion-dollar juggernaut and it’s only getting bigger.

Regardless, at the GOP convention so far this week, I’ve witnessed considerable anti-pot rhetoric, which was absent from last week’s Democratic convention. Emblematic of this GOP sentiment was a speaker yesterday who claimed that Democrats’ push for universal health care is really about ensuring a right to marijuana access, which in turn will lead to widespread euthanasia.

Natalie Harp, an advisory board member for President Trump’s reelection campaign, said at the GOP convention: “Democrats love to talk about health care being a human right, but a right to what? Well, I’ll tell you. To them, it’s a right to marijuana, opioids and the right to die with dignity.”

President Trump in recent days has voiced vehement opposition to marijuana legalization initiatives on the 2020 ballot. Trump has expressed concern that putting marijuana on the ballot drives Democratic voter turnout and puts Republicans at risk of losing elections. Legalization will be up for a vote in several swing states this November.

And yet, despite the best efforts of pot prohibitionists, the legalization of marijuana rolls on (so to speak). There’s too much money at stake. Anti-pot crusaders will probably prove unsuccessful in putting the genie back into the bottle.

By the time all the votes are counted in November 2020, several more states are likely to have legalized marijuana to one degree or another. Actions on the federal and state levels have the power to dramatically move pot stocks up or down.

For his part, Democratic presidential nominee Joe Biden has put forward proposals to decriminalize cannabis possession, legalize medical marijuana, expunge prior convictions, and let states set their own policies. Former vice president Biden is a moderate with the traditional social mores you’d expect from a practicing Roman Catholic. But Biden also is a politician and he can read the public opinion polls on marijuana.

As state and city governments across the U.S contend with the coronavirus outbreak, officials have had to make tough determinations about which businesses are critical enough to remain open and which should be temporarily shuttered.

In many states with legal cannabis, including California, Colorado, Illinois, Maryland, and New Jersey, officials have determined that marijuana dispensaries are, in fact, essential services that can continue to operate. That represents a massive attitudinal shift from the old paradigm during the War on Drugs, when marijuana was viewed by the establishment as “the devil’s weed.”

The pandemic has actually fueled marijuana sales, as quarantined consumers hoard weed and consume more of it to deal with stress.

Just take a look at California, which boasts the biggest legal marijuana market in the world. The California Department of Tax and Fee Administration reported on August 25 that marijuana tax revenue is up in the most recent quarter. California has reaped $1.45 billion in cannabis excise, cultivation and sales tax revenue since retail sales began in the state in 2018.

The Golden State leads the nation in projected marijuana sales for 2021 (see chart). 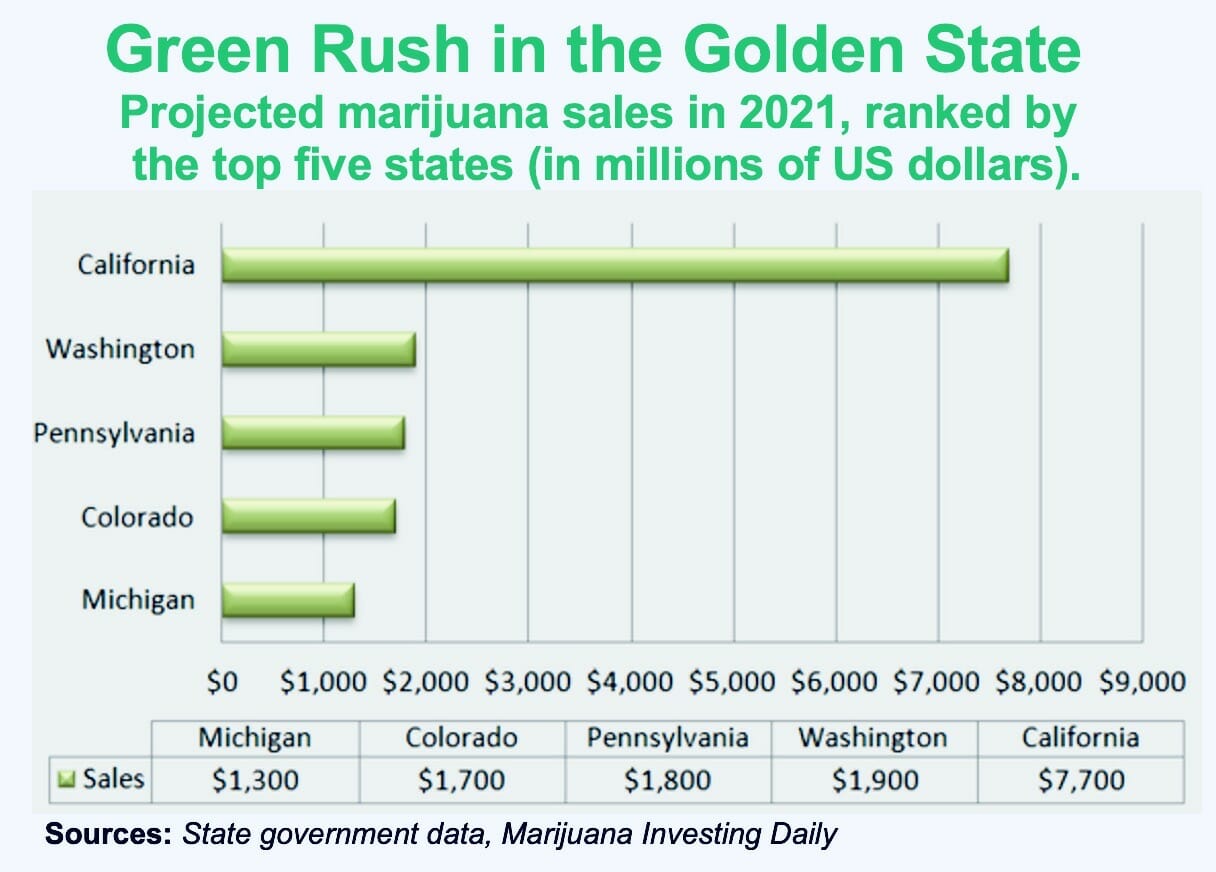 In a landmark 1996 ballot measure known as Proposition 215, medical marijuana was legalized by California voters. Approval of the measure opened the floodgates for marijuana legalization throughout America.

Federal and state governments realize that the marijuana boom is a potential bonanza in tax revenue and sure enough, elected officials are filling their treasuries with copious revenue from new pot taxes.

You can reap exponential profits by investing in “cannabusiness.” But not all marijuana stocks are created equal. After painstaking research, we’ve pinpointed the best cannabis investments available. Every portfolio should contain at least one marijuana stock. For the best pot stocks now, follow this link.