I’ve always been a fan of comedian Lenny Bruce. When he performed his controversial stand-up in the 1950s and 1960s, the bluenoses called Bruce’s social satire “sick.” Today, you can call it prescient. Bruce said in 1960:

“Do you realize that they’re busting kids for smoking flowers? But marijuana will be legal someday, because the many law students who now smoke pot will one day be Congressmen and they will legalize it to protect themselves.”

How right he was. In Congress and at the state level, we’re currently witnessing the most marijuana-friendly legal climate in history. And yet, despite the accelerating movement toward pot legalization, the prohibitionists haven’t given up.

In the run-up to the November 2020 election, the anti-pot crusaders have gotten more insistent. Among the arguments I’ve been hearing is that legalizing marijuana encourages greater pot use among kids. It’s the sort of rhetoric that makes marijuana investors nervous. But the evidence so far indicates that this notion is false.

Last week, marijuana advocates got more ammunition. According to a new report released on August 21 by the federal Centers for Disease Control and Prevention (CDC), lifetime marijuana consumption among high school students has declined during the peak years of state-level recreational cannabis legalization.

The biennial Youth Risk Behavior Survey examined lifetime use among youth as well as the separate measure of current (or past 30-day) marijuana consumption.

The CDC report found that lifetime marijuana consumption “increased during 2009–2013 and then decreased during 2013–2019.” Several large states legalized marijuana for adult use during that latter time period, with the first legal adult-use sales starting in in 2014. Accordingly, the CDC data supports the contention of marijuana legalization supporters that a lawful, regulated market for cannabis does not generate greater use by kids.

Of course, ideologues are rarely dissuaded by evidence. Anti-pot politicians lately have been dusting off the same false arguments against marijuana, the facts be damned. For them, it’s an article of faith that marijuana legalization will turn our kids into lazy pot-addicted criminals.

Read This Story: Anti-Pot Grievances Get an Airing

But according to the CDC report, there was “no change” in the rate of current cannabis use among high school students from 2009-2019. When analyzed using a quadratic change model, however, lifetime marijuana consumption decreased during that period.

In a press release, the pro-legalization Drug Policy Alliance stated:

“We are reassured by the latest results from the 2019 Youth Risk Behavior Survey because they show that youth marijuana use has not increased over the past decade, even as more states across the country have passed progressive marijuana laws. These results affirm that we must continue to promote marijuana legalization and regulation for its public health and community safety benefits, especially in regards to limiting youth access.”

The kids are alright…

For unexplained reasons, the CDC didn’t look at lifetime alcohol use but only lifetime marijuana use. Regardless, current alcohol use exceeded current cannabis use, so it’s logical to assume that lifetime consumption trends among the two substances would be similar (see the following chart). 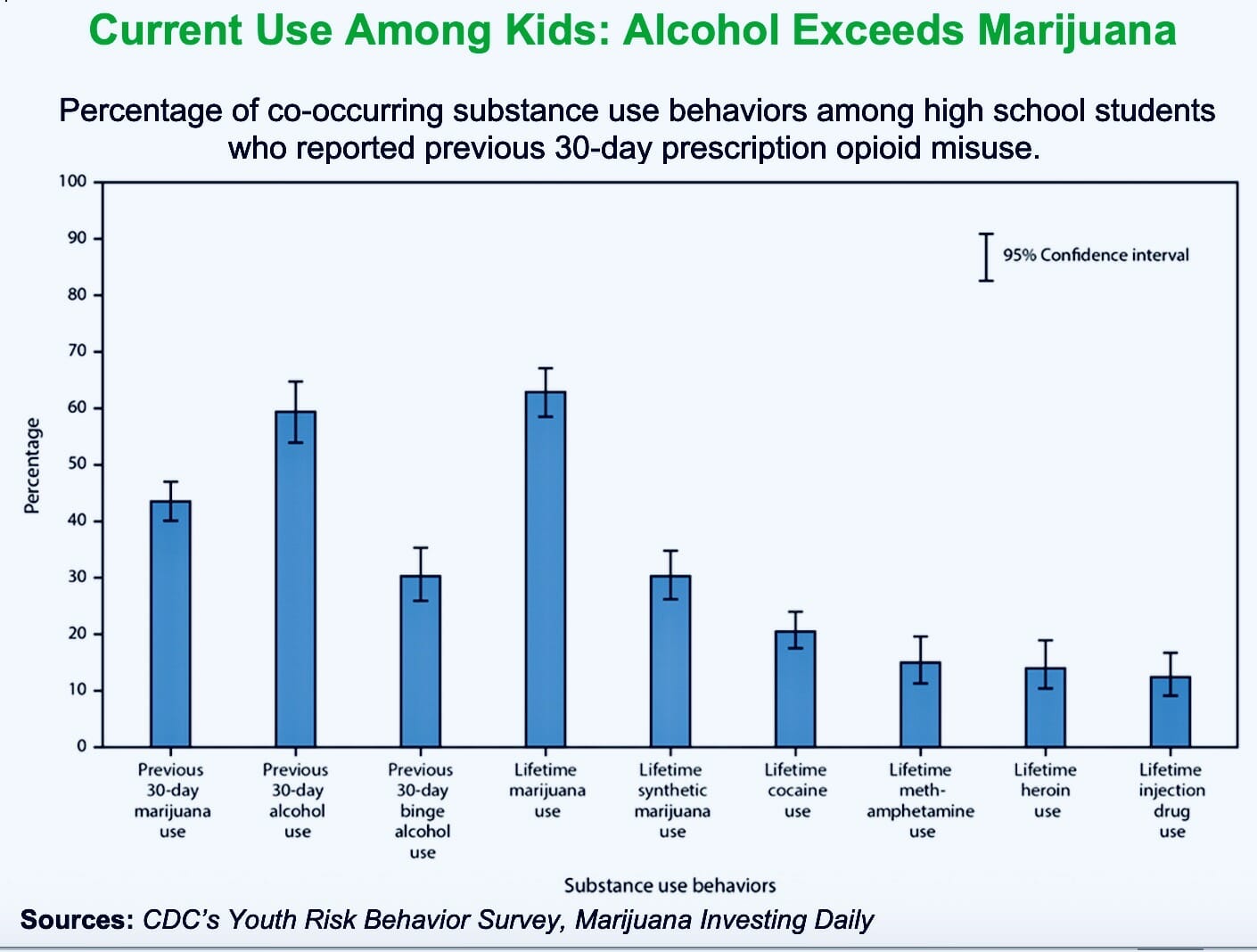 The CDC report confirms a study released by Colorado officials on August 3, revealing that youth cannabis consumption in the state “has not significantly changed since legalization” in 2012.

Last year, a study took data from Washington State and determined that declining youth marijuana consumption could be explained by replacing the illicit market with regulations and the concomitant “loss of novelty appeal among youths.”

The study found that recreational marijuana laws were associated with an 8% decrease in the likelihood of teens trying marijuana as well as a 9% reduction in the odds of frequent marijuana use. At the same time, medical marijuana laws had no noticeable effect on marijuana use among teens. To reiterate, marijuana legalization resulted in a decrease, not an increase, of pot use among kids.

Psychologists suggest that when marijuana is illicit, it becomes more attractive to rebellion-minded teens. Positive examples set by parents and other authority figures who legally and responsibly use weed are achieving the goals that the “just say no” contingent couldn’t achieve.

The upshot: Marijuana has entered the societal mainstream and there’s no reversing the trend. The prohibitionists are fighting a rear guard action that’s doomed to failure. Keep that in mind, if you’re ever hesitant to invest in marijuana because you’re afraid that weed will become illegal again.

You can reap exponential profits by investing in “cannabusiness.” Every portfolio should contain at least one marijuana stock. But not all marijuana stocks are created equal. After painstaking research, we’ve pinpointed cannabis investments with the greatest profit potential. Click here for our report on the best pot stocks.