Like an athlete abusing steroids, Wall Street is addicted to cheap credit and federal rescues. With humans, steroids initially provide greater strength but eventually create harmful side effects. The same dynamic occurs to economies and markets under the influence of financial “steroids.”

As reflected by its dovish policy announcement on Thursday, the Federal Reserve continues to inject stimulus but not without longer-term costs. Savers reliant on investment income, especially the elderly, are starved for safer alternatives to risk-on assets. Ultra-low interest rates have distorted markets. At the first whiff that the Fed is reversing course, investors will run for the exits.

Eventually, fundamentals will catch up with the artificially stimulated market and it will crash. But in the meantime, stocks are hovering at new highs. Treasury yields also have been climbing higher throughout the week, on hopes for a quick economic recovery.

Stocks closed mixed on Thursday in volatile trading. The Dow Jones Industrial Average rose 0.57% and the S&P 500 climbed 0.17%, but the tech-intensive NASDAQ slipped 0.34%. The NASDAQ was due for a breather, after Wednesday’s surge based on strong second-quarter earnings from technology companies. Stock futures Friday were trading higher.

Cheering investors yesterday was the Federal Reserve’s expressed determination to let inflation run a little hotter than the Fed’s previous goal, which would translate into lower interest rates for a longer period of time.

In a speech Thursday, Fed Chair Jerome Powell said the central bank had agreed to a policy of “average inflation targeting,” a term that translates into allowing inflation to run moderately above the Fed’s 2% target.

The Fed is pulling out all the stops to keep stocks afloat until the November 3 election. And after that? Brace yourself for the side effects of hyper-aggressive monetary stimulus.

As for further fiscal stimulus from Congress, lawmakers are deadlocked and new legislation isn’t likely. Problem is, unemployed people aren’t particularly motivated by low interest rates. They have little money to spend.

According to the latest data released Thursday by the U.S. Labor Department, another 1 million American workers filed for first-time unemployment benefits last week on a seasonally adjusted basis (see chart). 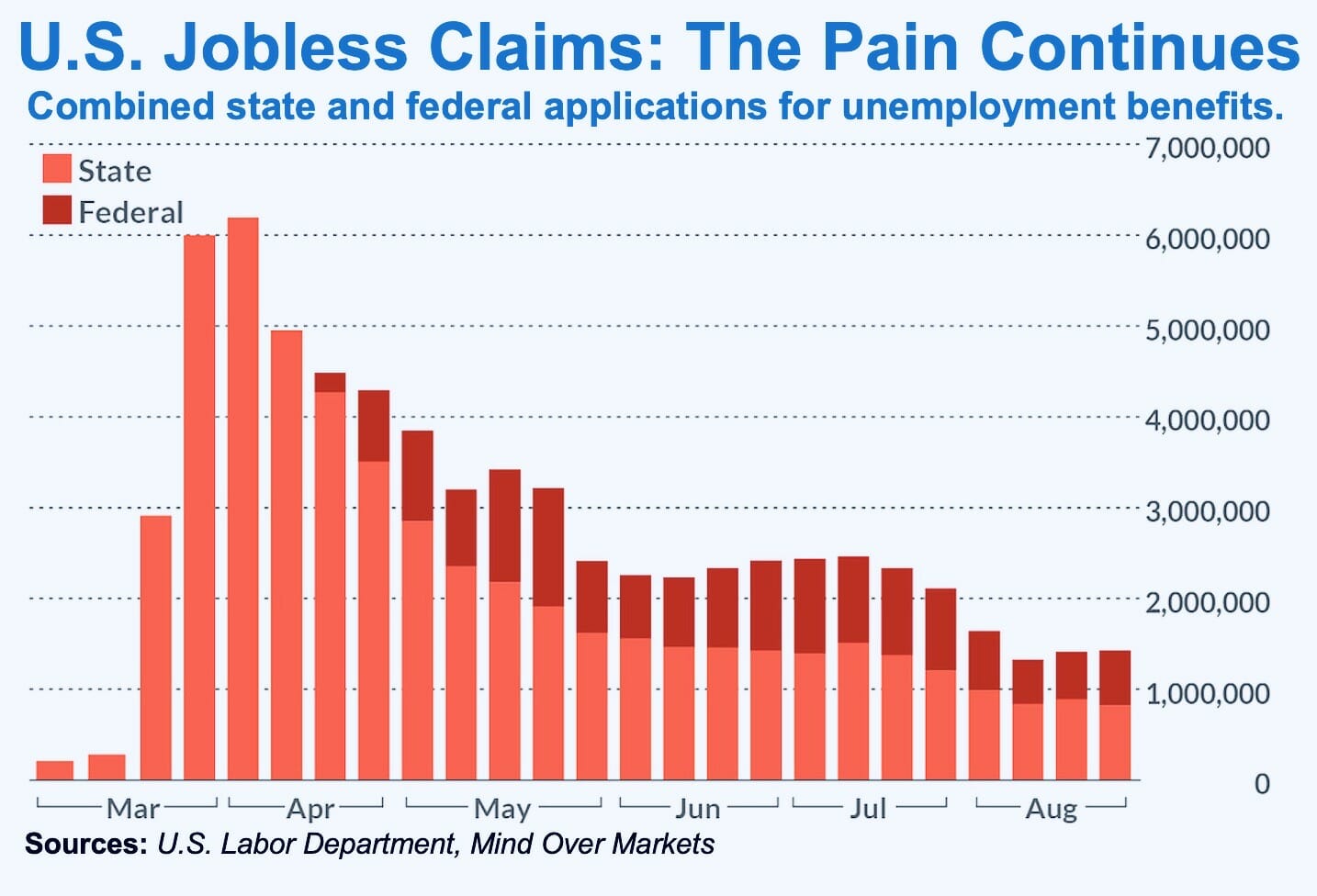 This latest jobless report marks the 22nd time in 23 weeks that unemployment claims topped 1 million, as the country grapples with the economic devastation of the COVID-19 pandemic.

The dual mandate becomes one goal…

The Fed operates under a mandate from Congress to “promote effectively the goals of maximum employment, stable prices, and moderate long term interest rates.” It’s often referred to as the Fed’s “dual mandate.”

However, since the pandemic-caused stock market crash of February-March 2020, the Fed seems to have adopted a less balanced mandate that amounts to one goal: prop up the stock market, by any means necessary.

Read This Story: Will The Fed’s Money-Printing Lead to Ruin?

The size of the Fed’s balance sheet currently hovers at $7.01 trillion, up from $3.76 trillion a year ago, which represents an increase of 86%. Keep in mind, the balance sheet was still bloated last year from the central bank’s stimulus efforts during the 2008-2009 Great Recession.

In essence, the Fed is bailing out its previous bail out. In gambling parlance, it’s called doubling down.

The stock market rally has been disconnected from harsh economic and biological realities and that’s largely because of the Fed’s extraordinary actions. The Fed has slashed interest rates to near zero and pledged to buy bonds in nearly all segments of the credit market, including government and mortgage securities and corporate and municipal bonds.

Wall Street in recent weeks has been treating the pandemic as if it were all a bad dream that never happened. And yet, despite the alternate reality created by politicians who are eager to downplay the pandemic, rates of infection and deaths continue to rise in certain “hot spots” of the country, especially in the South and Southwest.

As of this writing Friday morning, the U.S. has witnessed roughly 180,000 deaths from COVID-19 and we’re likely to see more in the autumn and winter. You don’t need a PhD in economics to realize that it’s bad for business when people die in mass numbers.

So where should an investor turn? Read on for the answer.

In search of predictable gains…

Instead of trying to time the market, you should look for investing methods that are immune to the pandemic, economic ups and downs, or the whims of monetary policy. That’s where my colleague Jim Fink comes in.

Jim Fink is chief investment strategist of the trading services Options for Income, Velocity Trader, and Jim Fink’s Inner Circle. He also serves as a senior analyst at our flagship publication, Personal Finance.

Jim is a world renowned expert in options trading. Okay, I know what you’re thinking: “Options? Whoa, I’m outta here!” But the fact is, Jim routinely generates huge returns for his followers, by deploying simple yet powerful options strategies.

Jim has perfected an options trading system that’s simple, safe and predictable. How predictable? Out of his 346 total trade recommendations over the past 50 months, 293 were profitable. That’s a “win rate” of 84.68%.