Video Update: Vexed by The VIX

Here’s my video presentation for today. For greater details and smart trading moves to make now, read my article below.

The stock market is overvalued, with a relatively small number of stocks reaping a disproportionately high amount of gains. Another cause of concern is the recent behavior of the CBOE Volatility Index (VIX), aka “fear index.” Last week, as equities hit new highs, the VIX significantly rose in tandem.

By tracking a basket of options based on the S&P 500 index, the VIX measures the implied volatility of the S&P 500 over the subsequent 30-day period. VIX readings are suggestive of the percentage range of returns the S&P 500 probably experienced over the short term.

Traders watch the VIX for signs of complacency during the market’s bullish periods and signs of extreme anxiety during bearish periods. Simultaneous rises in equity and volatility gauges, as we saw last week, are unusual and point to underlying nervousness on Wall Street.

The madness of crowds…

Beneath this summer’s “melt-up,” there’s unease that could soon give way to panic. When reviewing previous stock market crashes, we sometimes shake our heads at why investors didn’t see them coming. That’s because the historical narrative retroactively imbues these events with inevitability. In 1928, for example, few people thought a stock market crash was coming, but it occurred with a vengeance the following year. From our contemporary vantage point, the collapse of 1929 seems predetermined.

Future analysts may look back at the pandemic rally of 2020 with astonishment as to why investors remained so complacent as obvious disaster lurked. A bullish frenzy? Amid massive unemployment, a severe recession, and surging pandemic deaths? What were they thinking!

But for now, the rally rolls on.

The three main U.S. stock market indices closed higher last week, on track for their best August in 34 years. The S&P 500 has risen nearly 52% since its bear market bottom on March 23, rising 3.3% last week to post a new record high. The numbers tell the story: 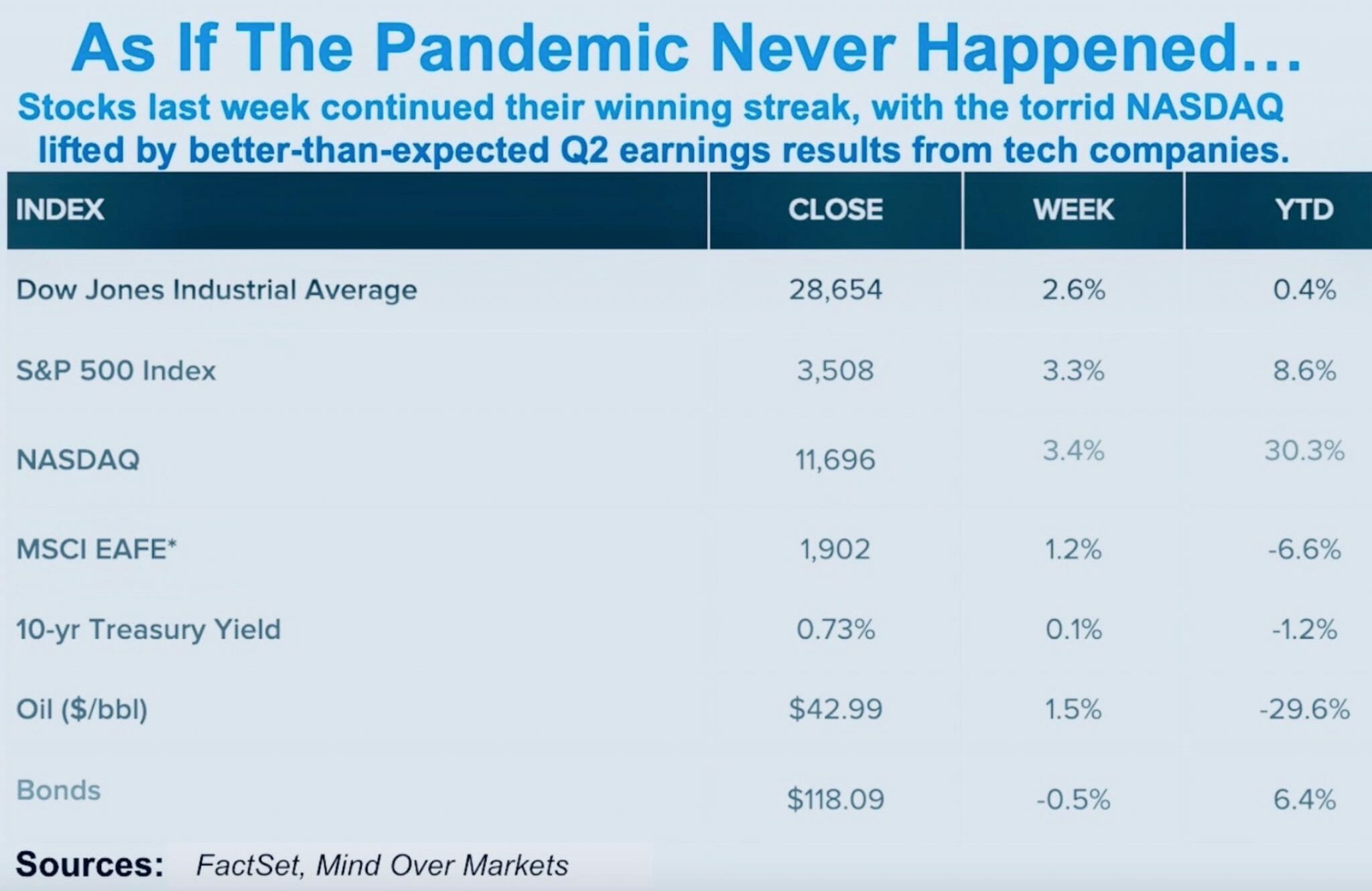 The major impetus for the rally? Federal Reserve stimulus. Fed Chairman Jerome Powell asserted last week that the central bank will let inflation run slightly higher than the traditional goal of 2%, which means interest rates will stay lower for longer.

So what hasn’t changed? Unemployment is painfully high and the economic recovery is spotty. It’s my contention that unemployment levels are worse than they appear. It remains uncertain how many temporarily laid off people will return to their employers.

Historically roughly 70% of workers on temporary furloughs return to their jobs, but this experience probably isn’t applicable to the current situation. Supposedly “temporary” furloughs are showing signs of becoming permanent.

In the post-COVID world, many of these jobs are likely to be replaced by robotics and automation. That’s a tailwind for tech stocks but disturbing news for many American households.

About six months after a record 6.9 million Americans filed for unemployment benefits in March, initial jobless claims continue to run above one million per week, which is higher than at any point during the Great Recession of 2008-2009. See my second chart. 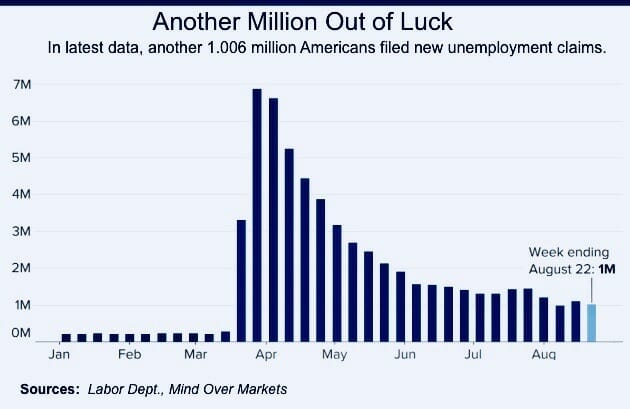 Federal Reserve stimulus does little for people without a job. Hiring and the recovery won’t pick up steam until the coronavirus is contained. Contrary to the “happy talk” of many politicians, the pandemic is not over and people continue to die. Infections and deaths pose a threat to consumer spending, which accounts for about three-fourths of U.S. gross domestic product.

Mega-cap technology stocks have outperformed during the coronavirus crisis, but they’re overvalued and poised for a tumble. Consider expanding your portfolio’s sector and asset-class exposure, e.g. to value plays and dividend payers. (For a list of the safest high-yielding stocks now, click here for our special report.)

After a decade of monetary infusions and ultra-low interest rates, the Fed has generated the largest asset bubble in history. Problem is, the Fed has painted itself into a corner. Any reversal of dovish policy is likely to burst the bubble.

The greatest danger is the market cap weighted structure of the S&P 500. The index is top heavy and vulnerable, with Alphabet (NSDQ: GOOGL), Amazon (NSDQ: AMZN), Apple (NSDQ: AAPL), Facebook (NSDQ: FB), and Microsoft (NSDQ: MSFT) comprising more than a fifth of its market value.

Apple holds the greatest weight in the S&P 500 index, accounting for about 6.5%. Last Friday, Apple closed at $499.23 per share. My third chart shows Apple’s phenomenal rise over the past 10 years. The Cupertino, California-based consumer tech stalwart has become the first company whose market cap has passed the threshold of $2 trillion (see below). 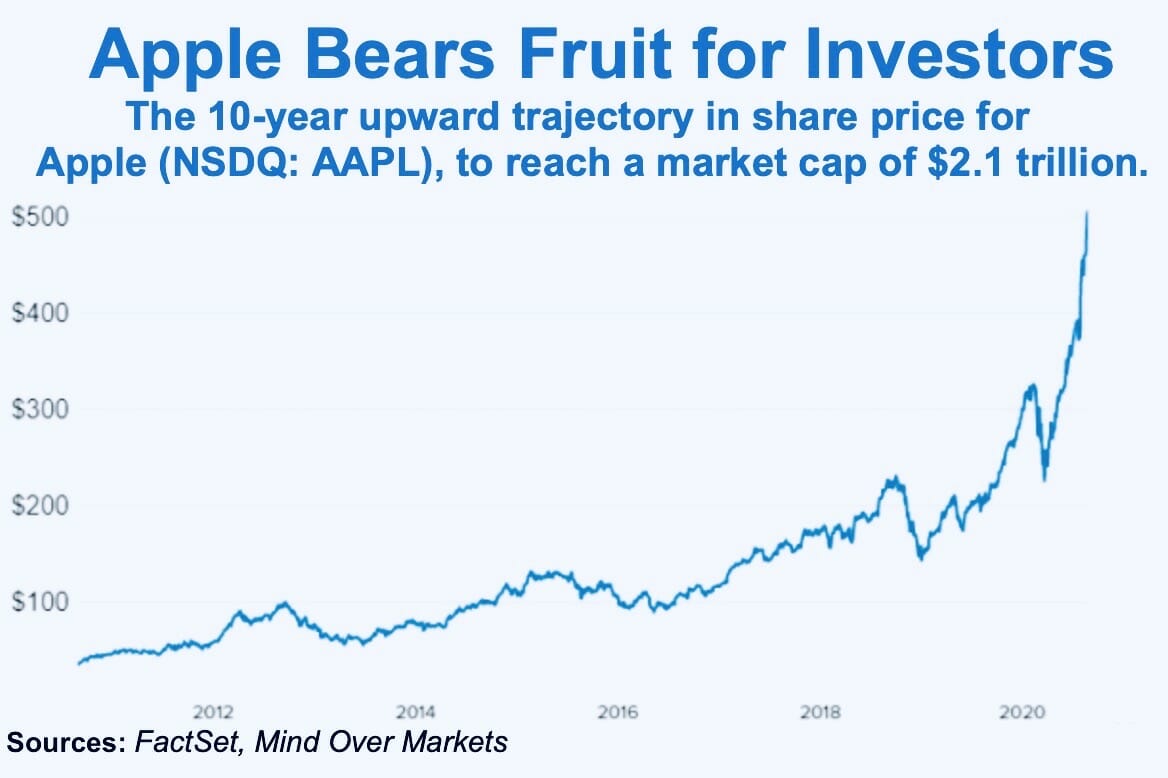 The five aforementioned tech giants on average have risen about 40% year to date, while the 495 other stocks in the index have collectively lost a few percentage points. Even if the market’s biggest tech stocks fell only 10%, the bottom 100 stocks of the S&P 500 would need to climb 90% to make up for the decline. This disparity isn’t sustainable and could pave the way for a market plunge.

Does this mean you shouldn’t invest? Not at all. But you must realize that a day of reckoning will come and the market will fall. It’s impossible to time these events. That’s why you should look for investing methods that are immune to the pandemic, economic ups and downs, or the whims of monetary policy. That’s where my colleague Jim Fink comes in.

Jim Fink is chief investment strategist of the trading services Options for Income, Velocity Trader, and Jim Fink’s Inner Circle. He also serves as a senior analyst at our flagship publication, Personal Finance.

Jim has perfected an options trading system that’s simple, safe and predictable. How predictable? Out of his 346 total trade recommendations over the past 50 months, 293 were profitable. That’s a “win rate” of 84.68%.

Want to make money with Jim Fink…without getting vexed? Click here for details.