Making money is America’s secular religion. For those who seek to make money in marijuana, lifting the federal ban on weed is the Holy Grail.

Several states and localities have removed restrictions against marijuana, but weed remains illegal as a controlled substance at the federal level. If the federal ban ever gets removed…hallelujah. It’ll represent a huge payday for the marijuana industry and investors.

A vote on a bill to federally decriminalize marijuana will take place in about three weeks in the U.S. House, the second highest ranking Democrat in the chamber informed members on Monday.

Majority Leader Steny Hoyer (D-MD) stated in a “Dear Colleague” letter dated August 31 that the September docket for the House will include a vote on the Marijuana Opportunity, Reinvestment and Expungement (MORE) Act, which is scheduled to reach the floor of that chamber during the week of September 21.

MORE is a comprehensive federal cannabis bill and its passage would provide a major positive catalyst for marijuana stocks. The legislative package was introduced last year by House Judiciary Committee Chairman Jerrold Nadler (D-NY) and has cleared his panel.

The MORE Act would federally deschedule cannabis (i.e., lift the federal criminal ban) and expunge the records of those with previous marijuana convictions. MORE would impose a 5% tax on cannabis sales, the revenue from which would be reinvested in communities most harmed by the War on Drugs.

MORE also would expedite resentencing for people imprisoned for marijuana offenses, protect immigrants from being denied citizenship because of cannabis, and prevent federal agencies from blocking public benefits or security clearances due to its use (see graphic below). 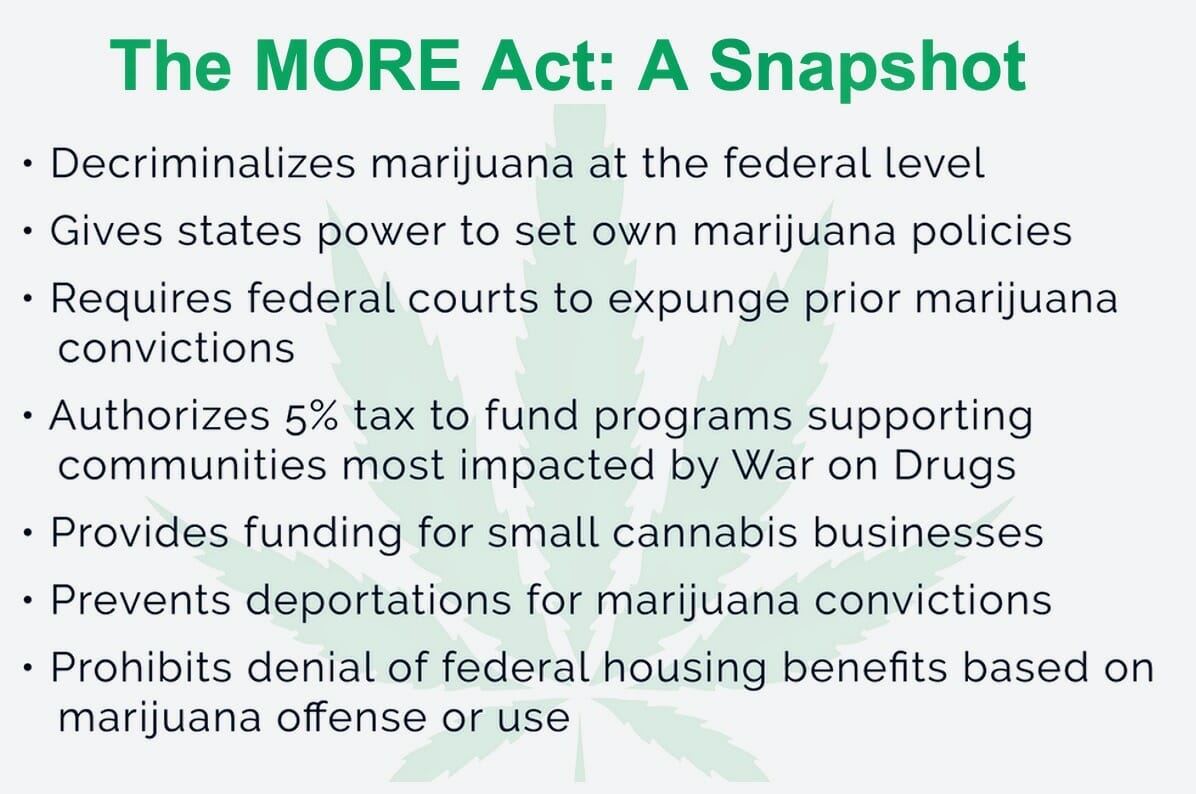 MORE lost momentum earlier this year due to the coronavirus pandemic and it’s been languishing in the House. Marijuana industry advocates in recent days have been aggressively lobbying for the bill to reach the floor for a vote.

In a letter to House leadership earlier last month, a coalition of major drug policy and civil rights organizations, including the American Civil Liberties Union, NAACP, Human Rights Watch, and the Drug Policy Alliance, called for a floor vote on the MORE Act by the end of September. The coalition is getting its wish, which is good news for marijuana investors.

MORE will probably pass the House, which is dominated by Democrats with records of supporting marijuana normalization. But the bill’s path to becoming a full-fledged law could get bumpy.

If the House approves the bill, its fate in the Senate is uncertain (but not dire). Majority Leader Mitch McConnell (R-KY) is on record as being against the bill, but his opposition is showing signs of softening. McConnell recently held closed-door meetings with marijuana industry representatives, fueling speculation that he might throw his weight behind MORE. It’s also a positive sign that McConnell already is a big advocate for hemp, as Kentucky farmers seek new cash crops.

That said, McConnell has taken pride in obstructing Democratic initiatives, especially those he deems as too progressive. His ability to kill legislation has earned him the nickname, “Doctor No.” Much depends on the outcome of the November elections. President Trump has been mum on whether he would sign MORE.

If MORE does indeed make it through the Senate, it’s likely that Democratic presidential nominee Joe Biden would sign the bill into law, if he won in November and the bill ended up on his desk. Biden’s running mate, Senator Kamala Harris (D-CA), is the lead Senate sponsor of the MORE Act. If the GOP loses control of the Senate in November, MORE’s chances of passage significantly improve.

“Getting caught for smoking marijuana when you’re young surely shouldn’t deny you, the rest of your life, being able to have a good paying job or a career or a loan or an ability to rent an apartment,” Biden said. “Right now, that criminal record is the weight that holds back too many people of color, and many whites as well.”

These trends underscore why every portfolio should contain marijuana stocks. However, investors need to tread wisely. Avoid risky penny stocks and fly-by-night players. Booming industries tend to attract fraudsters and inept businesspeople. Marijuana is no exception.