The Stock Market Gets Trippy

I remember watching the crime drama “Dragnet” on television as a kid, during the 1960s when the show made a point of criticizing the counterculture. Sergeant Joe Friday (played by Jack Webb) would fulminate against marijuana and psychedelics. This dialogue from a 1967 episode is indicative:

Sgt. Friday’s voice over narration, after arresting a kid on an acid trip: “The subject was booked under Section 601: in danger of leading an idle, dissolute, or immoral life. I carry a badge.”

And today? Psychedelics is storming the stock market and the halls of government. The mainstreaming of these mind-altering substances is nothing short of a cultural revolution. (Sorry, Joe.)

Based in London, Compass is backed by PayPal (NSDQ: PYPL) and billionaire tech investor Peter Thiel. Since 2016, Compass has raised nearly $116 million from venture capitalists such as Thiel. Compass is researching mushrooms as a treatment for depression and intends to take its mushroom-infused products through clinical trials.

But magic mushrooms aren’t just for getting high and wandering in the desert looking for shamans. Scientific research shows they can alleviate physical pain, depression, anxiety, chronic headaches, PTSD, and a host of other ailments. Magic mushrooms are on track to play vital roles in the future of therapy, in medicine and psychiatry.

The movement to decriminalize psychedelics is gathering momentum around the U.S., reminiscent of the early days of marijuana decriminalization. Psychedelics reform bills have been introduced in several state legislatures and activists are lining up ballot initiatives.

The movement has even reached the nation’s capital, with a measure called Initiative 81 on the ballot this November. I-81 seeks to decriminalize a wide range of psychedelics in the District.

According to a new poll released this week by FM3 Research, three-in-five voters in Washington, DC are in favor of I-81. FM3 Research conducted the poll of 620 likely DC voters from August 16-24. Support for the measure increased significantly as more residents became informed about the proposal, rising nine percentage points since the last poll was conducted in April.

Sixty percent of survey respondents said they would vote in favor of I-81, which would make entheogenic substances such as psilocybin mushrooms and ayahuasca among the lowest local law enforcement priorities in the nation’s capital city. Only 24% said they would vote “no,” with an additional 16% undecided (see the chart). 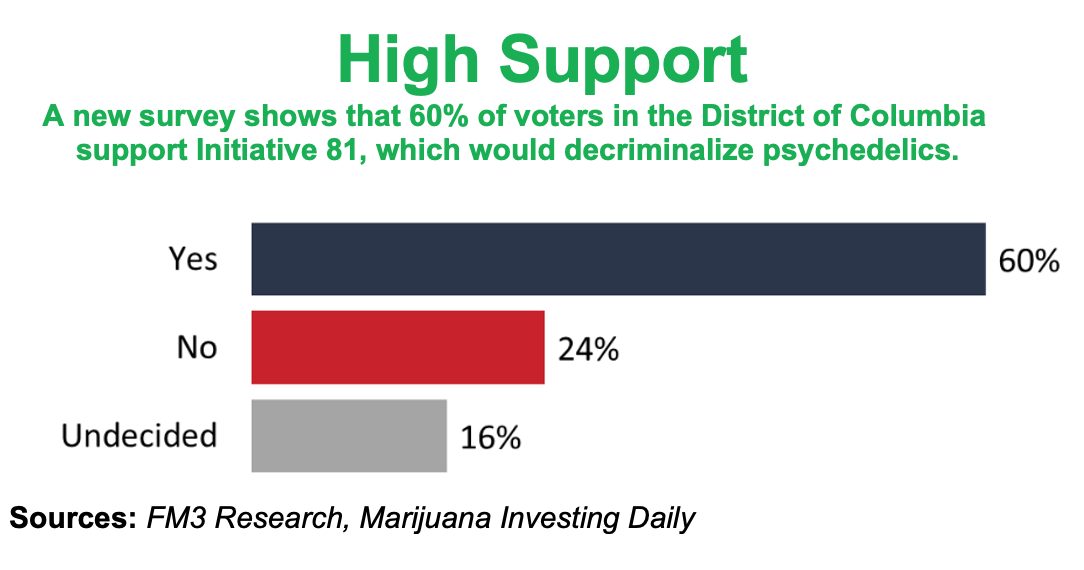 “[This] polling shows unequivocal support for ensuring DC residents using plant and fungi medicines to overcome depression, anxiety, PTSD, and other conditions are not law enforcement targets. This polling also underpins what we learned talking to DC residents in all eight wards while collecting over 35,000 signatures to place Initiative 81 on the ballot. It is clear that DC residents are ready to reform outdated laws for entheogenic substances.”

In the meantime, I’ll keep an eye out for potentially lucrative opportunities in the realm of magic mushrooms and psychedelics. They represent a trip…to the bank.