Has The Much-Expected Correction Finally Begun?

As stocks in general and technology shares in particular have soared since late March, a few readers have expressed frustration with my cautious stance. For weeks, I’ve consistently advised you to elevate cash levels and avoid overvalued risk-on assets.

I turn your attention to the words of Bernard Baruch, financial advisor to President Franklin Roosevelt. Baruch was the investment guru of his day. He sold his stocks just before Black Thursday in 1929. He raked in a fortune, ahead of the Great Crash.

Baruch once said: “I made my money by selling too soon.”

No one bangs a gong to announce the start of a correction. Thursday’s bloodbath begs the question: has the long-anticipated market downturn finally started? No one can say for sure, but it would be reckless to remain unprepared.

Below, I spotlight a trading system that can guard as well as enhance your hard-earned wealth. But first, let’s examine the increasingly dangerous investment context.

Massive monetary and fiscal stimulus have driven a rally in U.S. stocks in recent months, sending the S&P 500 and NASDAQ to record closing highs on Wednesday. Much of the rally’s impetus has derived from Big Tech stocks that benefit from the emerging work-at-home culture.

The Fear Of Missing Out syndrome combined with the boredom of quarantine has helped stoke the rally. Individual investors stuck at home are blindly speculating on the “story stocks” they see touted on financial television. That’s a recipe for disaster.

The perpetually cheerful hucksters on TV have been touting a V-shaped recovery, an imminent COVID-19 vaccine, and all manner of fantasies. Reality intruded yesterday. Pricey and popular Silicon Valley stocks were the biggest losers Thursday, dragging down the rest of the market.

The S&P 500 is a house of cards. The index is top heavy, with Alphabet (NSDQ: GOOGL), Amazon (NSDQ: AMZN), Apple (NSDQ: AAPL), Facebook (NSDQ: FB), and Microsoft (NSDQ: MSFT) comprising more than a fifth of its market value.

The economic news is taking a turn for the worse, with joblessness still hovering at disastrous levels. Bureau of Labor Statistics (BLS) data released Thursday showed the number of Americans filing new claims for unemployment benefits declined more than expected last week. That’s cold comfort, though, when the unemployment rate exceeds 10% and 30 million Americans are without a job (see chart). 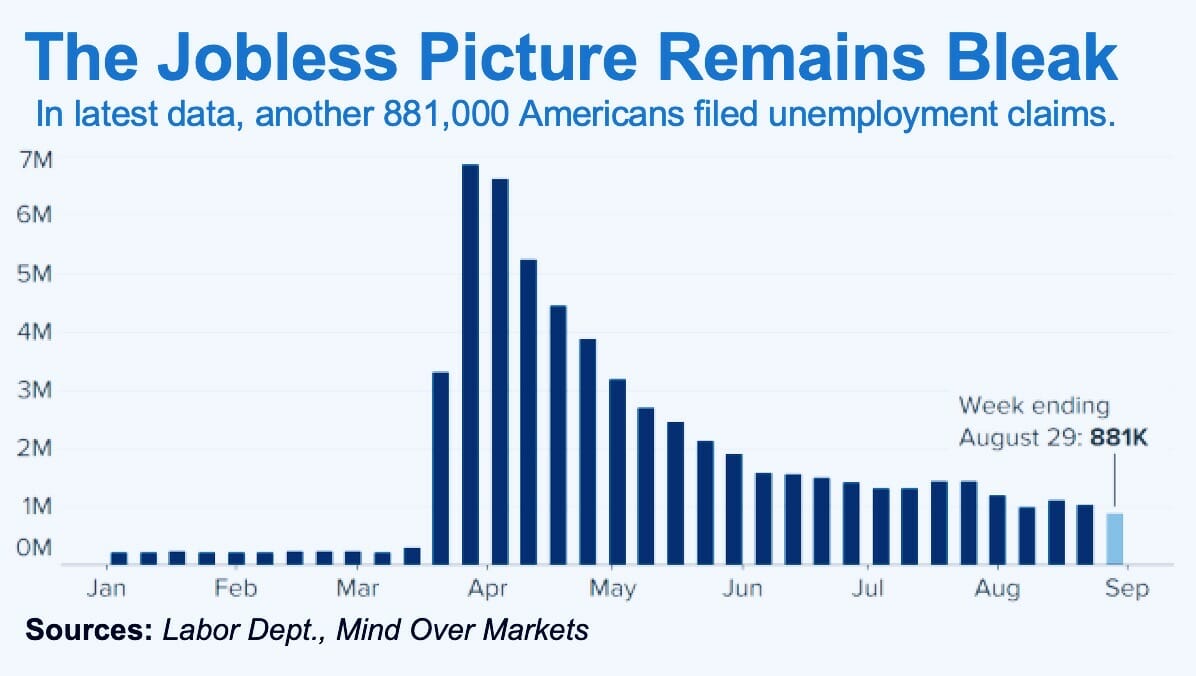 What’s more, during this brutally contested election year, it’s difficult to separate the BS from the BLS. Last week, the agency changed its methodology in calculating unemployment data in a way that makes the jobless picture look better than it is.

Separately, a survey showed U.S. services industry growth slowed in August. The Institute for Supply Management reported Thursday that its index of activity in the services sector gave a reading of 56.9% in August, down 1.2 percentage-points from the July reading of 58.1.

The ISM report stated: “Industries that have not reopened remain concerned about the ongoing uncertainty. There is a challenge with capacity and logistics due to the pandemic and the impact on deliveries and order fulfillment.”

The initial boost from business openings and fiscal stimulus appears to be fading. The Federal Reserve already has pulled out all the stops and its balance sheet is bloated. As for a new coronavirus relief bill from Congress, don’t hold your breath. While millions of Americans struggle to pay for basic necessities, lawmakers left for vacation.

The “recovery” touted by self-interested parties is a mirage. The hardship for ordinary citizens and small businesses will only get worse and stocks can’t remain immune forever.

Read This Story: The Economic Vise Is Tightening, Not Easing

Big Tech took a big hit Thursday and the declines in the tech sector probably aren’t over. The good news is, our investment experts have unearthed a hidden value play in technology that’s poised for exponential gains.