Welcome to my video presentation for today. Below, my article delves into greater details and steers you towards an exciting investment opportunity.

Coca-Cola’s famous slogan from a bygone era promised “The pause that refreshes.” Stocks just posted a bad week. Refreshing pause? Or the start of a trend reversal? Let’s look for clues.

The Labor Day holiday is now behind us, marking the unofficial end of summer. Last week finished on a down note. Volatility returned to the stock market, with declines on Thursday and Friday of 3% and 1%, respectively. Previous to last week’s decline, the S&P 500 had gained ground for four consecutive weeks to reach a record high. The CBOE Volatility Index (VIX) hit a high of 38.28 on Friday, its highest level since June.

Stock futures this morning were trading mixed before the open, with the battered NASDAQ poised to extend its losses. Overvalued mega-cap tech stocks continue to come under selling pressure.

Doubts about the resilience of the supposed recovery are weighing on the markets. Unemployment hovers at an extreme high and many temporary layoffs are becoming permanent. The number of Americans classified as permanently unemployed, versus being on temporary furlough, increased by 534,000 in August even as the U.S. economy added 1.4 million jobs.

It’s important to note that these job additions mostly represent people returning to their old jobs (often for lower pay). The phrase “new jobs” is being thrown around by politicians who want to put a rosy spin on the numbers but it’s not accurate. As Mark Twain said: “There are three kinds of lies: lies, damned lies, and statistics.”

Investors also are growing pessimistic about the coronavirus pandemic, as infections and deaths flare in regions of the country that have been practicing lax social distancing. During the back-to-school season, college campuses are proving to be the new front lines of the outbreak.

U.S. deaths from the coronavirus will reach 410,000 by the end of 2020, more than double the current death toll, and deaths could soar to 3,000 per day in December, according to a report released September 4 by the University of Washington’s health institute.

What’s more, talk of an imminent vaccine is starting to ring hollow as Wall Street belatedly realizes that it’s scientifically impossible for a treatment to arrive before the end of the year. Current efforts in Washington to fast-track a treatment before the November elections are widely derided by health experts as a political stunt. Biotech firms continue to hype their progress on vaccines but to my gimlet eye it mostly smacks of pump-and-dump schemes.

Congress returns from recess this week but hopes are dim for a new coronavirus relief package. The two political parties remain far apart on approaches. Stimulus proposals that emerge from the Democratically controlled House invariably die on arrival in the GOP-led Senate. The Democrats favor a worker-oriented approach; Republicans prefer breaks for business.

During a Labor Day press conference, President Trump said he refuses to meet with Democrats concerning a relief bill, accusing their leaders of bad faith. The political gridlock is souring Wall Street’s mood. Meanwhile, 55 million Americans have filed for unemployment since mid-March.

The good news is that the folks in Washington actually did their jobs last week. Congress and the White House last Thursday announced an informal deal on a federal budget, to avert a government shutdown at the end of this month.

The week finishes in the red…

The confluence of economic and political headwinds produced a down week for the major benchmarks, as the following table shows. 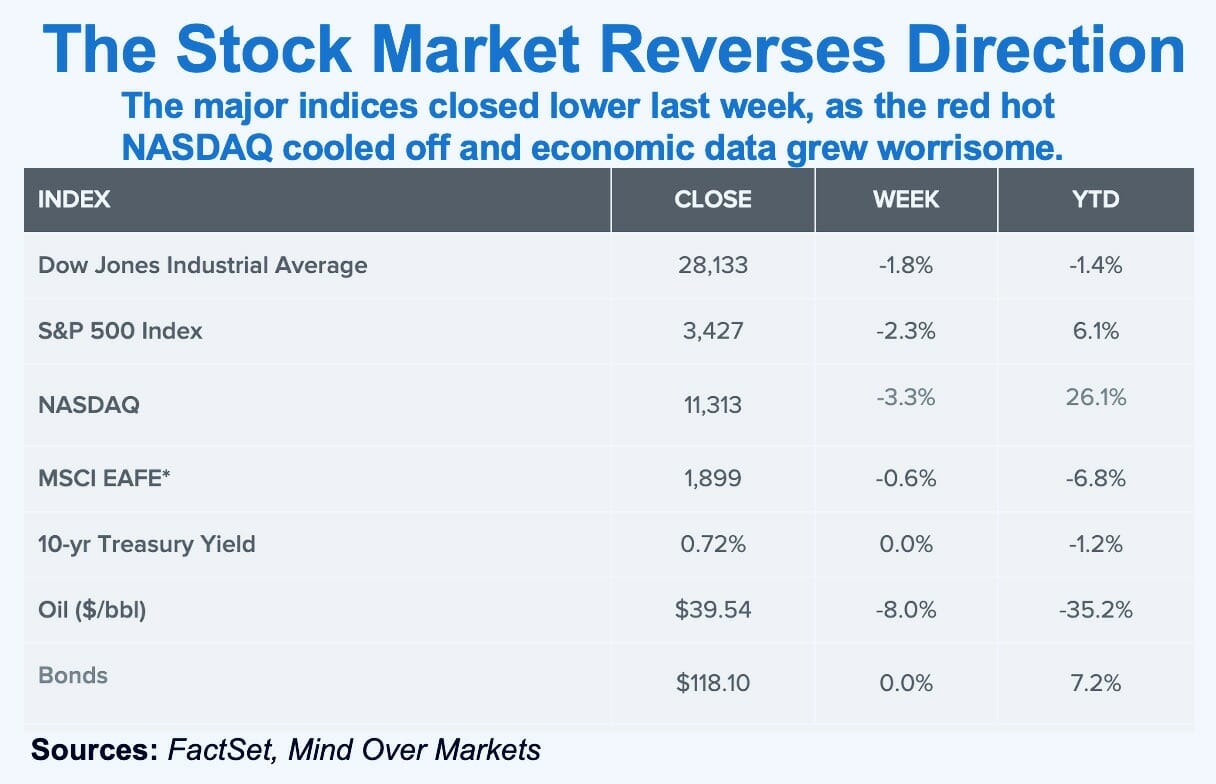 The rally has been disconnected from economic fundamentals and corporate earnings, but powered by unprecedented monetary and fiscal stimulus. As the third quarter gets underway, fiscal stimulus has largely expired and earnings continue to look weak.

With Labor Day behind us and the end of 2020 in sight, how does the third quarter look? Not too good.

But there’s at least one sign of tentative improvement. During the first two months of Q3, analysts boosted EPS projections for companies in the S&P 500 for the quarter. The Q3 bottom-up EPS estimate increased by 2.6% (to $32.62 from $31.78) during this period. “Bottom up” is an aggregation of the median EPS estimates for Q3 for all the companies in the index. Take a look at the following chart: 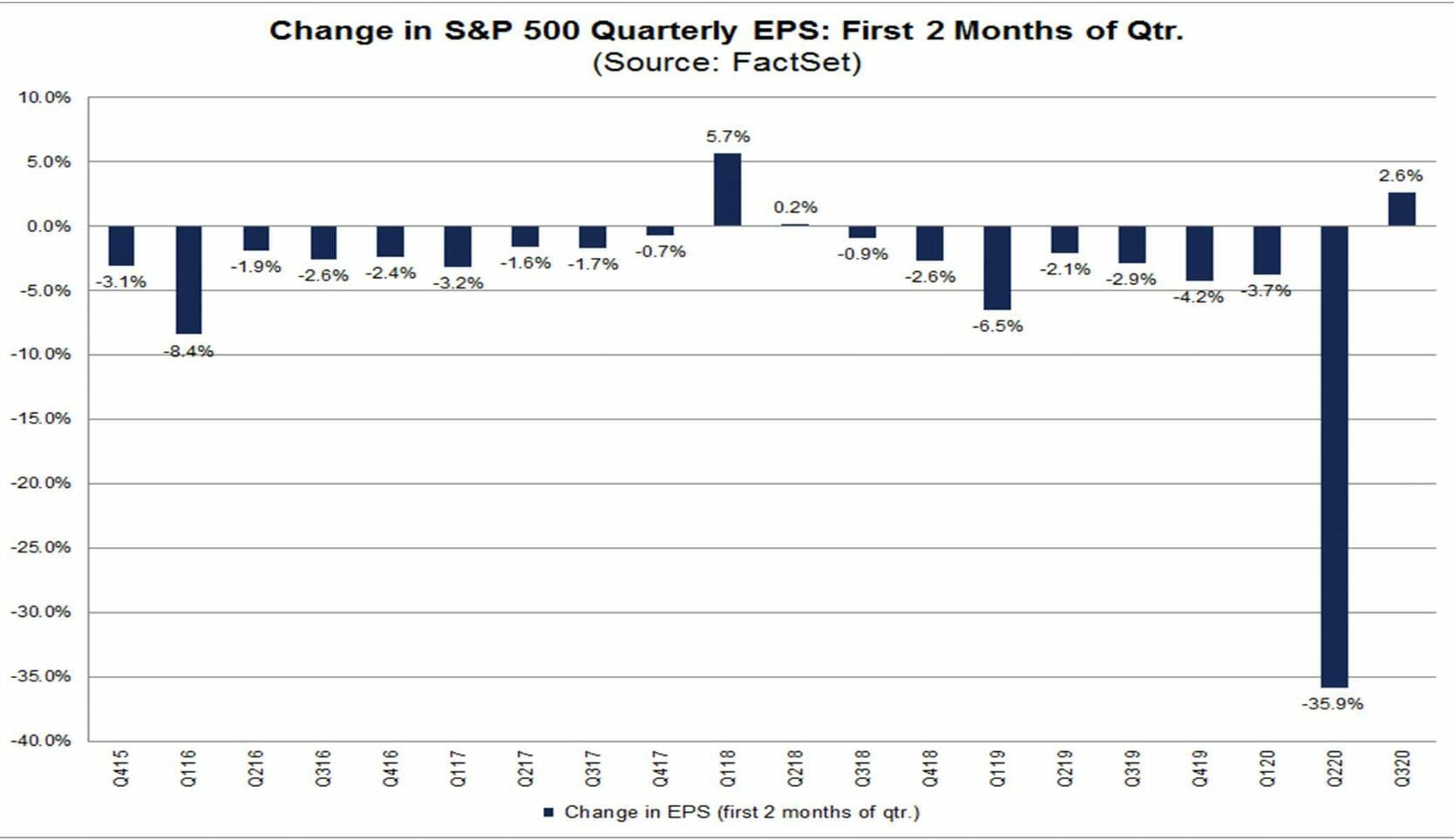 The question is, was last week’s decline the start of a prolonged downward trend or merely a healthy breather?

Read This Story: Has The Much-Expected Correction Finally Begun?

Even with last week’s decline, the S&P 500 is up more than 50% from its March 23 low, with returns to new highs in recent weeks.

But keep in mind, the U.S. economy posted its largest quarterly decline in gross domestic product (GDP) in the second quarter, contracting by an annualized rate of 32%, four times larger than the worst quarter during the 2007-2009 Great Recession.

Adding to the stock market’s vulnerability is top heaviness. At the beginning of 2020, the five largest stocks in the S&P 500 accounted for about 18% of the index’s market capitalization, up from about 12% three years prior.

The CAPE ratio is defined as price divided by the average of 10 years of earnings (moving average), adjusted for inflation. The ratio currently stands at 31.47, which is 99.1% higher than the historical median of 15.80 (see chart below).

Over the short term, brace yourself for unexpectedly negative data that could trigger a market rout.

Read This Story: The Economic Vise Is Tightening, Not Easing

Volatility is likely to accelerate in the coming months, as pandemic and political uncertainties roil the markets. You need to maintain a diversified portfolio and rotate toward stocks that are tapped into trends with long-term momentum.

That’s where Radical Wealth Alliance comes in. On this premium trading service, our investment team pinpoints the hottest trends. We hunt for companies that are disrupting the marketplace. We dive into financial statements, analyze reams of data, and interview CEOs and company insiders. We even uncover nuggets of intelligence hidden in investor conference calls.

We take all this information, literally thousands of hours of accumulated data, interpret it and identify those companies that have the best potential of booking market-beating gains over the next year and beyond.

After months of painstaking research, we’ve just unearthed a hidden gem of a stock that’s poised to take off. For the full details click here now.