If nothing else, the stock market’s behavior over the past two weeks should dispel one longstanding investment myth. That is the so-called “stock split effect,” which posits that a company’s share price always goes up immediately following a stock split.

So the conventional wisdom goes, a lower share price makes it accessible to more investors. It also creates the false impression that an expensive stock just got a lot cheaper.

For example, Tesla (NSDQ: TSLA) was trading near $2,500 at the end of August. That means a single “round lot” (100 shares) would set you back a cool quarter-million dollars.

Not many individual investors can afford that. But after its 5-for-1 stock split two weeks ago, that same round lot would only cost only $40,000. Quite frankly, even that reduced amount is out of the reach of most people.

There was a time when most stocks were only traded in round lots on the major exchanges. If you couldn’t afford to buy 100 shares of one of those companies then you were out of luck.

For that reason, the stock split effect appears to have finally gone the way of the dodo. Most investors now realize that a stock’s share price no longer denotes the value of the business.

Over the five trading days following its stock split at the start of this month, Tesla fell 34%. At the same time, Apple (NSDQ: AAPL) lost 13% of its value after its 4-for-1 split on the same day. 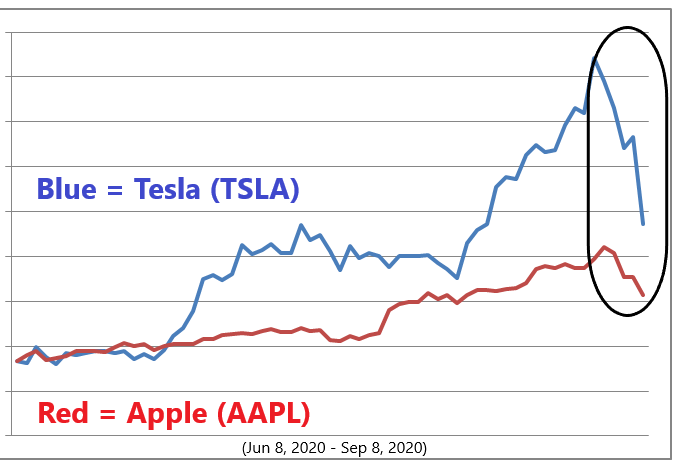 The NASDAQ Composite Index decreased 5% while Tesla and Apple were in rapid retreat. For that reason, some of the decline in those two stocks could be attributed to an overall market selloff.

However, Apple dropped more than twice as much as the index while Tesla’s loss was nearly seven times that of the NASDAQ. That degree of underperformance suggests something more was at work. I believe there was, which may portend a very different stock market going forward.

The question isn’t whether Tesla stock is worth $2,500 or $500, but what it is worth compared to everything else. The actual share price is irrelevant since anyone can buy as many (or as few) shares as they like.

That brings us to another long held Wall Street belief, the “Greater Fool Theory.” According to it, paying any price for a stock is okay so long as there is someone else willing to buy your shares from you at a more inflated price than you paid for them.

Read This Story: Don’t Be The Greater Fool

That had been the case until recently for many large-cap tech stocks. While the coronavirus pandemic ravaged the economy over the past six months, Amazon.com (NSDQ: AMZN) doubled in value to more than $3,500 per share.

Since then, AMZN has dropped 10% and may have farther to fall. The problem for a stock when it runs up so fast is that it has that much less support on the way down.

If the pool of greater fools has indeed dried up, then Tesla, Apple, and Amazon may have much further to fall. Their huge gains this year have not been accompanied by a commensurate improvement in performance.

What drove those stocks higher was the belief that they were certain to survive the coronavirus pandemic. They each hold so much cash and generate so much cash flow that they would be among the last businesses on the planet to fail.

I do not disagree with that assessment, but there is an upper limit to what any business is worth. Even at a reduced share price of $330, TSLA is valued at a forward price-to-earnings ratio (FPER) of more than 300 times next year’s profits. That is roughly ten times the same multiple for AAPL, which in turn is valued at a 25% premium to the S&P 500 Index.

If investors really are starting to wise up, it won’t be the overvalued momentum stocks that they will be going for. Instead, they will start looking for much smaller companies that can grow earnings at a high rate for years to come.

I recently discovered such a business and shared its identity with readers of our Radical Wealth Alliance trading service. Since then, this small company has gained 40% in less than four months. I think it could go a lot higher. By my calculations, this stock could appreciate more than 2,000% in the years to come.

Want to know more? I’ve written a full report that identifies this company by name and explains why I believe it is about to make a massive move to the upside.