The Stock Market Succumbs to Gravity

I fly helicopters for fun. That’s me in the picture, back when I was undergoing training as a helicopter pilot with the Bell Helicopter Training Academy in Fort Worth, Texas. 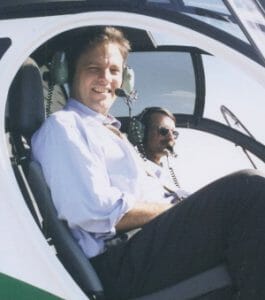 During one training session, I was with a pilot instructor in the cockpit of a Bell 407 when we encountered turbulence at 3,000 feet. The instructor saw the nervous look on my face and said with a mischievous grin: “Gravity! It’s not just a good idea. It’s the law.”

Those words could be applied to the stock market. In the investment world, valuation is the closest thing we have to the law of gravity. Stocks have been defying that law.

The major indices just suffered three bad days in a row, but they’re still overpriced. A steeper tumble probably lays ahead. Below, I’ll explain why and what you can do about it.

After three consecutive days of big losses for the major stock market benchmarks in the U.S., worries about a sharper correction are increasing on Wall Street.

Despite a barrage of bad news about the economy, the stock market had previously capped a sizzling summer with its best August in decades. The hottest performer was the NASDAQ Composite, which hit a new all-time high on September 2, closing above 12,000 points for the first time, up a whopping 75% from its low point in March.

However, last week finished on a sour note, with major declines in the three indices on Thursday and Friday, as economic and coronavirus developments all took a turn for the worse.

When investors returned from the Labor Day holiday on Tuesday, stocks extended their losses. The Dow Jones Industrial Average yesterday plunged 632.41 points or 2.25%; the S&P 500 fell 95.12 points or 2.78%; and the tech-heavy NASDAQ plummeted 465.41 points or 4.11%. The NASDAQ has fallen 10% in three days. Stock futures Wednesday were trading modestly higher.

As the optimists blindly celebrated the pandemic-era rally, I’ve been warning of the disconnect between dire economic conditions and the dizzying rise of equities, especially the unsustainable spike in Big Tech stocks. All three major indices in the U.S. are currently up at least 50% percent from their March 23 lows, even though the U.S economy is mired in the worst economic downturn since the Great Depression.

As I wrote in yesterday’s column, the widely followed Cyclically Adjusted Price to Earnings (CAPE) Ratio indicates that stocks in the S&P 500 are excessively valued. By all other major yardsticks, the stock market’s valuation is stratospheric, despite recent declines.

One proven way of looking at stock valuations is the market value of all publicly traded companies as a percentage of gross domestic product (GDP). Super-investor Warren Buffett calls it “the best single measure of where valuations stand at any given moment.”

The ratio of market capitalizations (as measured by the broad Wilshire 5000 index) to GDP is even higher now than it was shortly before the bursting of the dot.com bubble in 2000 and the housing bubble in 2007.

Using quarterly average closes of the Wilshire 5000 Total Market Index and dividing it by quarterly GDP figures shows that the ratio is high to an unprecedented degree (see chart). 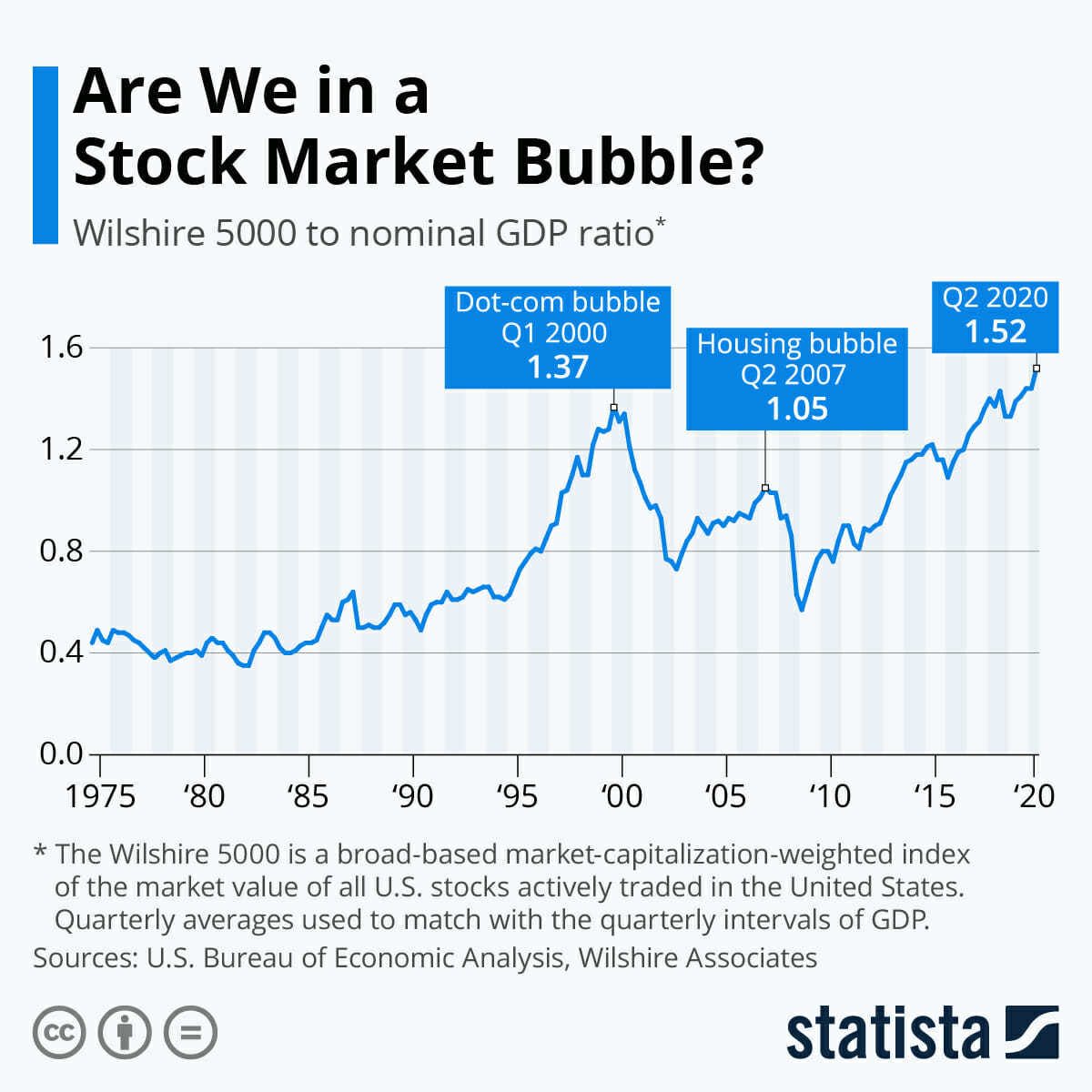 At the May 2 annual meeting of Berkshire Hathaway (NYSE: BRK.A, BRK.B), Buffett struck a decidedly downbeat tone about future prospects for the global economy and financial markets.

Berkshire’s annual meeting in Omaha is often referred to as “The Woodstock of Capitalism.” This year, the mood more closely resembled Altamont. The Berkshire confab was a glum, “virtual” affair missing all of the usual hoopla.

Buffett’s pessimism lately is a far cry from the rah-rah optimism that he exhibited during previous financial crises. Notably, during the global financial crash of 2008-2009, Buffett rode in as a white knight to rescue blue-chip corporate icons, infusing them with cash and proclaiming his undying faith in the resiliency of American capitalism. No such reaffirmation came from Buffett this year, which should worry you.

With the so-called “Buffett Indicator” for the U.S. currently hovering at a record high, brace yourself for further sell-offs ahead.

I’ve just outlined a lot of bad news. Now the good news: Our investment experts have unearthed a hidden value play in technology that’s poised for exponential gains, despite the headwinds afflicting the rest of the market.