Buckle up and keep the Dramamine handy. The market’s twists and turns won’t end anytime soon.

The bulls are nervous and lack conviction. That’s because they’re grappling with a nagging reality: stocks are overvalued and considerably overdue for a correction.

A warning sign is the recent behavior of the CBOE Volatility Index (VIX). Also known as the “fear gauge,” the VIX is the market’s most widely followed indicator of expected volatility over the next 30 days. When the stock market rises, typically the index declines, and vice versa.

In recent days, though, stocks and the VIX have been rising in tandem, a phenomenon that preceded the 2000 dot.com crash.

Also flashing a red alert is the “Buffett Indicator” that measures the market value of all publicly traded companies as a percentage of gross domestic product (GDP).

The ratio of market capitalizations, as measured by the very broad Wilshire 5000 index, to U.S. GDP hovers at an historically high level.

The favorite valuation tool of billionaire investor Warren Buffett, this ratio is even higher now than it was shortly before the market plunges of 2000 and 2007.

Read This Story: The Stock Market Succumbs to Gravity

You’re heard of Fear of Missing Out (FOMO). Here’s another acronym for you: Buy on the Dip (BOTD).

U.S. stocks on Wednesday rebounded from a three-day rout, as bargain hunters scooped up beaten-down technology shares. The Dow Jones Industrial Average rose 1.60%, the S&P 500 climbed 2.01%, and the tech-heavy NASDAQ jumped 2.71%. But stock futures Thursday were trading sharply lower, so the roller-coaster continues.

We can’t simply jawbone the coronavirus away. Just because someone appears on television and says everything is fine doesn’t mean it’s true. The disease-causing pathogens of COVID-19 are oblivious to press conferences.

Back in February, several policymakers and pundits were asserting that the coronavirus had been contained and the economy would hold up nicely. They purposely downplayed the threat of the coronavirus, even though many of them privately knew better. Since then, tens of thousands of people have died and the economy has tanked to a degree not seen since the Great Depression.

As of this writing Thursday morning, the U.S. has experienced nearly 191,000 deaths from COVID-19. U.S. deaths from the coronavirus will reach 410,000 by the end of 2020, more than double the current death toll, and deaths could soar to 3,000 per day in December, according to a report released September 4 by the University of Washington’s health institute.

When the world gets back to “normal” after the pandemic has passed, many consumers will still lack the financial wherewithal and confidence to immediately open their wallets again.

Small businesses, which make up most of the economy, have been devastated. The economic damage will linger far longer than typically experienced in the aftermath of a recession. This uncertainty is apparent in the recent behavior of the VIX.

The stock market is forward looking and right now it’s staring at a terrible corporate earnings performance. According to research firm FactSet, the estimated year-over-year earnings per share (EPS) decline for the third quarter of 2020 is -22.4%, which is below the five-year average EPS growth rate of 4.0%.

All eleven S&P 500 sectors are expected to report a year-over-year decline in Q3 EPS, led by the energy, industrials, and consumer discretionary sectors.

The energy sector is expected to report the largest year-over-year decline in EPS of all eleven sectors at a stunning -106.6%. Lower oil prices caused by pandemic-induced demand destruction are contributing to the earnings decline for this sector. The energy sector is widely viewed on Wall Street as a barometer of the overall economy’s health.

West Texas Intermediate (WTI), the U.S. benchmark, currently hovers at $38.00 per barrel and Brent North Sea crude, on which international oils are based, sits at about $40/bbl. Those levels are generally below the breakeven price for oil producers. The following chart tells the story. 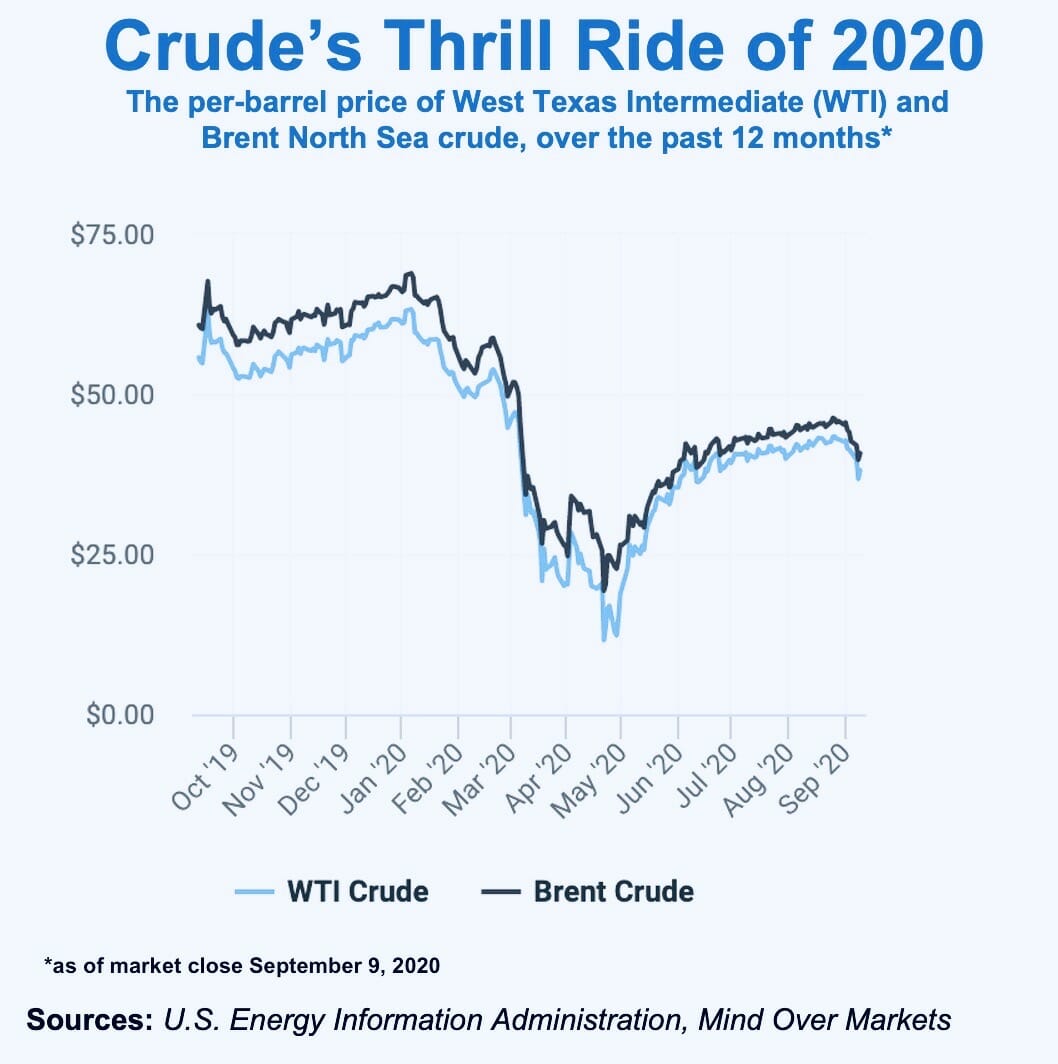 But here’s the good news: Our investment experts have unearthed a hidden value play in technology that’s poised for exponential gains, despite the headwinds afflicting the rest of the market.