The U.S. House is led by marijuana-friendly Democrats, but the GOP-controlled Senate is dominated by social conservatives with a deeply entrenched bias against pot. Various bills that lift restrictions on marijuana are making progress in the House, only to languish because the Senate won’t consider them.

Cultural biases die hard. When it comes to marijuana, prejudice against weed has been more than a century in the making.

Consider this 1905 Washington Post article, in which an anthropology professor describes his experimental smoking of marijuana and the symptoms that he claims to have experienced:

“Everything seems to move around the smoker, this whirl becoming faster and faster, until all sense of his surroundings is lost…

The next step of his intoxication is full of terrors. Troops of ferocious wild animals march before the vision of the smoker. Lions, tigers, panthers, and other wild beasts occupy his vision. The wild animals are then attacked by hosts of devils and monsters of unheard of shapes. The smoker becomes brave and possessed of superhuman strength. It is at this stage of the debauch that murders are committed by the smoker.”

Um…wow. And this report came out more than 30 years before the release of the notorious anti-marijuana propaganda film, Reefer Madness (1936).

Fast forward to 2020 and marijuana in the U.S. is increasingly part of everyday life, from coast to coast. To be sure, marijuana remains illegal on the federal level. However, medical marijuana is currently legal in 33 states and the District of Columbia, and recreational use is legal in 11 states and DC (see map). 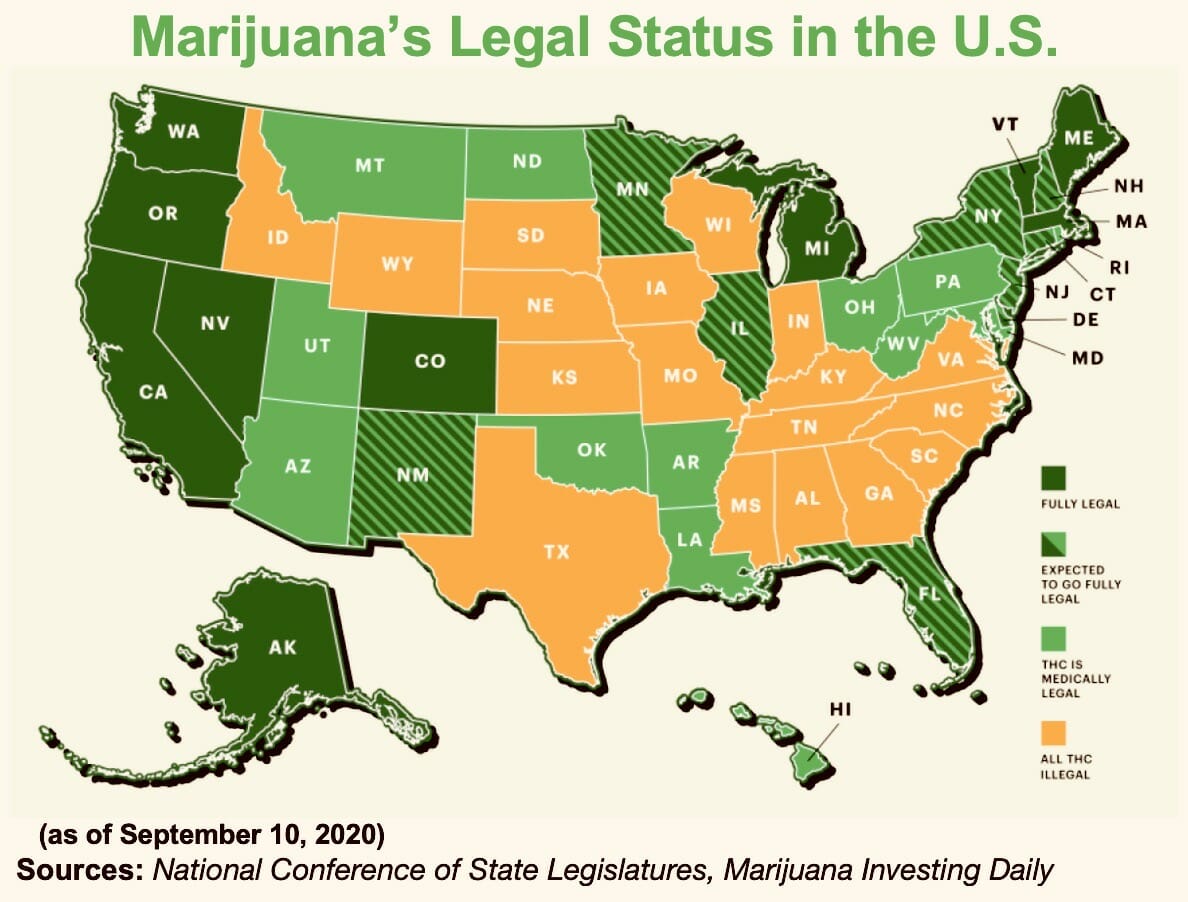 Pot legalization enjoys powerful momentum, but investors should realize that there will be setbacks along the way. Many political leaders are firmly set in their personal antipathy toward pot. Most Americans favor legalization but Congress seems schizophrenic on cannabis.

Case in point: A House committee on Wednesday approved marijuana research legislation that would allow scientists to finally study cannabis from state-legal dispensaries. But the bill is unlikely to see action in the Senate.

The Energy and Commerce Committee yesterday moved to advance the bipartisan Medical Marijuana Research Act in a voice vote. The bill would establish a simplified registration process for researchers interested in studying cannabis, in part by reducing approval wait times, minimizing unwieldy and costly security requirements, and abolishing several layers of protocol review.

The next step for the legislation would be a vote on the House floor. But even if the full House approves the bill (which won’t happen anytime soon), it faces an uphill climb in the Senate.

The good news is that the September docket for the House includes a vote on the Marijuana Opportunity, Reinvestment and Expungement (MORE) Act, which is scheduled to reach the floor of that chamber during the week of September 21. The stakes are considerably higher with MORE.

Among other things, the MORE Act would federally deschedule cannabis (i.e., lift the federal criminal ban) and expunge the records of those with previous marijuana convictions. But even if MORE passes the House, which seems likely, all bets are off in the Senate, which is led by anti-pot Senator Mitch McConnell (R-KY).

In speeches on the Senate floor, McConnell has ridiculed House Speaker Nancy Pelosi (D-CA) over her statements that marijuana is a useful medical therapy. In terms of marijuana legalization, McConnell has been The Grim Reaper. There are glimmers of hope that may change, though. McConnell recently met with marijuana lobbyists and Kentucky farmers are in dire need of a cash crop to replace tobacco. In recent years, as anti-smoking laws and regulations gain ground, cash receipts for tobacco in the Bluegrass State have plummeted.

The mainstreaming of marijuana can’t be stopped, but it won’t be a linear process. There will be ups and downs along the way. Every portfolio should contain marijuana stocks. However, investors need to tread wisely. Avoid risky penny stocks and fly-by-night players. Booming industries tend to attract fraudsters and inept businesspeople. Marijuana is no exception. What’s more, the entire marijuana industry tends to get whipsawed by political headlines.

After painstaking research, we’ve pinpointed stable cannabis investments with the greatest profit potential. Click here for our report on the best pot stocks.