Psychedelics: The New Formula for Profits

Counterculture rock star Jimi Hendrix’s debut album in 1967 was an ode to psychedelics called: Are You Experienced. I played the vinyl record constantly as a teenager.

Nowadays, a lot of mainstream consumers can claim psychedelic experiences. From soccer moms to corporate executives, the growing trend is to imbibe psychedelics to foster wellness and boost creativity. In fact, micro-dosing “magic mushrooms” and LSD has become a big fad among super-rich Silicon Valley hipsters.

Maybe the world isn’t quite ready for a second Summer of Love. But psychedelic mushrooms and LSD are no longer just recreational. They’re becoming Big Business.

Medical research increasingly confirms the efficacy of psychedelics to treat physical and mental ailments. Entrepreneurs, consumers and investors are jumping aboard the psychedelics movement, an emerging mega-trend that’s reminiscent of the mainstreaming of marijuana.

Several mushroom species naturally contain the compound psilocybin, which has hallucinogenic properties akin to LSD. Scientists are excited about the possibilities of using psilocybin and LSD to treat various mental and physical illnesses.

For investors, the psychedelics trend represents a trip…to the bank. A growing number of psychedelics companies are going public, which spells opportunity for proactive investors. In a minute, I’ll discuss initial public offerings (IPOs) in this area. But first, here’s an update on the latest developments in the fast-growing psychedelics industry.

From Timothy Leary to Adam Smith…

Prestigious Johns Hopkins University recently opened a new center for psychedelic research. The center, with $17 million from donors, aims to give psychedelic-based medicines a foothold in the medical establishment. Johns Hopkins’ scientists are studying compounds like LSD and psilocybin for a range of mental health problems, including anorexia, addiction, and depression.

On July 27, a new report by the think tank the Adam Smith Institute argued that psilocybin should be reclassified under the list of less harmful drugs. In the report, the institute maintained that psychedelics are a benefit to society that shouldn’t be banned.

Magic mushrooms, LSD and marijuana are illegal in the U.S. at the federal level. But there’s a nationwide push at the state and local levels for legalization of these substances. Marijuana, of course, got an earlier start at normalization and has made the most headway.

As for mushrooms and LSD, the times they are a-changin’. Denver, Colorado last year became the first jurisdiction in the U.S. to decriminalize psilocybin fungi. Small businesses are sprouting up in Denver to meet the growing demand for mind-altering mushrooms. It won’t be long before these cottage industries evolve into a multi-billion-dollar industry. We saw it happen with cannabis.

The historic legal change enacted on May 7, 2019 in the Mile High City has triggered other initiatives. Activists in more than 100 cities across the U.S. are mobilizing this year to reform their own policies on psychedelics. Scores of initiatives are on state ballots for the November 2020 election.

Myths about psychedelics are falling by the wayside. A recent survey conducted by the influential medical journal The Lancet found that mushrooms and LSD, when taken properly, are among the safest recreational drugs (see chart). 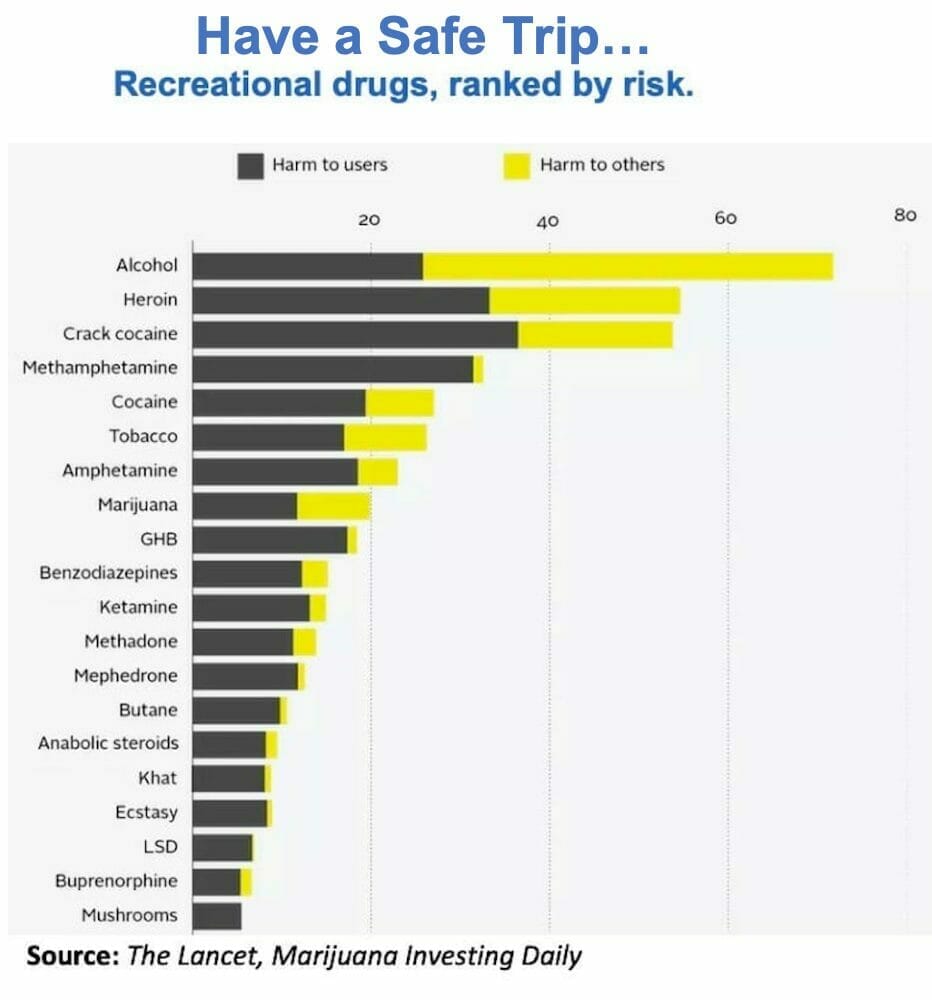 You’ll notice that booze tops the list of harmful substances. Just as the prohibition of alcohol in the U.S. ended, so too will the federal prohibition of marijuana and psychedelics. I contend that it’s only a matter of time.

Turn on, tune in, go public…

The psychedelics industry could capture a significant chunk of the $28.6 billion global antidepressant market in coming years. Entrepreneurs are sitting up and taking notice.

Based in London, Compass is backed by PayPal (NSDQ: PYPL) and billionaire tech investor Peter Thiel. Since 2016, Compass has raised nearly $116 million from venture capitalists such as Thiel.

Thiel has his fingers in many pies and his instinct for spotting nascent mega-trends is impressive. Notably, Thiel became Facebook’s (NSDQ: FB) first outside investor when he acquired a 10.2% stake for $500,000 in August 2004. He sold the majority of his shares in Facebook for over $1 billion in 2012. He remains on the social media giant’s board of directors.

At the end of April, Compass announced the successful completion of a funding round, raising $80 million to help expand its research program in psilocybin therapy.

Read This Story: The Stock Market Gets Trippy

In March, a microcap psychedelics company called Mind Medicine (NEO: MMED) (OTC: MMEDF) made history by becoming the first psychedelics pharmaceutical firm to go public. Based in New York City, Mind Medicine (DBA MindMed) is developing psychedelics derived from mushrooms and other substances to address medical challenges such as the opioid crisis.

Cannabis already is a huge global industry and as such, the major pot players are likely to co-opt the psychedelics movement through internal investments and mergers and acquisitions. I’m keeping an eye on efforts to bring mushrooms and LSD into the consumer mainstream. In the meantime, we’ve pinpointed the best cannabis investments available. Click here to learn more.