A few years ago, a friend accepted a voluntary retirement package from United Airlines (NSDQ: UAL). He’d been a pilot with them for 30 years and was ready to turn in his wings.

As part of the deal, he had a choice of receiving UAL stock or the cash equivalent. I advised him to take the money and run. I’ve never been a fan of the airline industry due to its high cost structure and narrow profit margins.

At the time, UAL was trading around $70. When it rose above $90 a year later, I’m sure my friend wondered if he had made a mistake taking the cash instead.

I haven’t talked to him lately, but I doubt he is having any second thoughts now. As a result of the coronavirus pandemic, UAL briefly plunged below $20 six months ago. It has since rallied back above $30 but is still down more than 50% this year.

Despite my disdain for airline stocks, I recommended buying UAL five months ago. That day, UAL closed near $24. If you had bought it then, you’d be sitting on a gain of 50%.

I also recommended buying Marriott International (NSDQ: MAR) and Norwegian Cruise Line Holdings (NYSE: NCLH). Since then, they have each appreciated more than 50%, too.

It’s one thing to buy a stock in the immediate aftermath of a full-blown market meltdown. Just about everything is oversold so picking winners is easy.

But it’s something altogether to identify which stocks will continue to perform well after the market has rallied. Nothing is cheap, and just about everything appears overvalued.

Last week, another company from the airline industry was in the news. Unfortunately, it was not the kind of news that a shareholder likes to hear.

A congressional oversight committee concluded that Boeing (NYSE: BA) and the Federal Aviation Administration (FAA) committed numerous errors in approving the 737 MAX airliner that ultimately resulted in two crashes that killed over 300 passengers.

You might think news that bad would have sent shares of Boeing into a tailspin. It didn’t. The next morning, BA had gained more than the S&P 500 Index.

The bull case for buying Boeing now is that the damage has already been done. In February 2019, BA was trading above $440. Now, it is priced closer to $160. That works out to a loss of better than 60% in less in just 19 months. 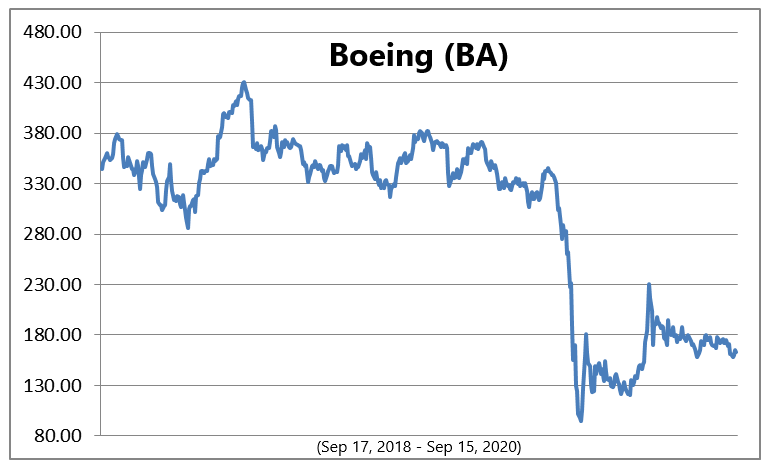 The bear case for selling Boeing now is based on the future, not the past. Several major airlines, including United, have acknowledged that it will take several years for them to recover from the damage done by the coronavirus pandemic.

Those recovery plans include canceling orders for new jets built by Boeing. In May, United informed Boeing that it will need less than half the new planes it expected this year and next.

It isn’t just United that has canceled orders with Boeing. And it isn’t only American air carriers that are doing it, either. Last month, one analyst reckoned that Boeing will deliver 138 new aircraft this year compared to 380 in 2019.

The question of Boeing’s value does not depend on what it was worth a year or two ago. It depends on the company’s financial condition a year or two from now, which at the moment looks bleak.

The degree of pessimism over Boeing’s future can be quantified in the options market. Last week while BA was trading near $162, a put option that expires on January 15 at the $160 strike price could be bought for $20.

That means BA would have to fall below $140 for this trade to be profitable at expiration. Boeing has only traded below that price this year during a seven-day span in March, and that was while the entire stock market was crashing.

By the way, Boeing’s supporters are equally optimistic. The $160 call option that expires in January was also priced near $20 last week. For that trade to be profitable at expiration, BA must rise above $180 within the next four months.

I do not believe it is likely to do either. If last week’s news didn’t send Boeing spiraling down the charts then it is difficult to imagine what would.

At the same time, I don’t see what in the way of unexpected good news could arise in the near term. The coronavirus pandemic appears to be far from over so airline travel is not likely to rebound strongly later this year.

That being case, last week you could have sold both the $160 call and put options and collected $40 in options premiums. As long as Boeing rises no higher than $180 or sinks no lower than $140 over the next four months, that trade should be profitable.

That is known as a “short straddle” in options parlance and it’s a good way to generate immediate income on stocks that are stuck in a rut. Rather than trying to guess which way a stock is likely to go, you are betting on it to not go very far in either direction.

If you like the idea of using options to generate income but aren’t sure how to do that, I suggest you follow the advice of my colleague, Jim Fink.

Jim Fink is the chief investment strategist of Velocity Trader. Jim also is a millionaire and an investing legend. By deploying his options trading methodology, his followers are getting rich, too.