The past three weeks have been a rough time for the stock market. At the start of this week, the S&P 500 Index was down more than 10% from its intraday high on September 2.

That officially put it in correction territory, perhaps signaling an end to the summer rally that drove it 15% higher from the end of May to the start of September. Even still, the index was up 2% for the year at the end of last week despite the coronavirus pandemic.

When that happens, money becomes increasingly concentrated in a shrinking number of stocks. For example, video streaming service Roku (NSDQ: ROKU) jumped 17% on Monday after announcing that it will begin offering the Peacock inventory of NBC programming to its subscribers. 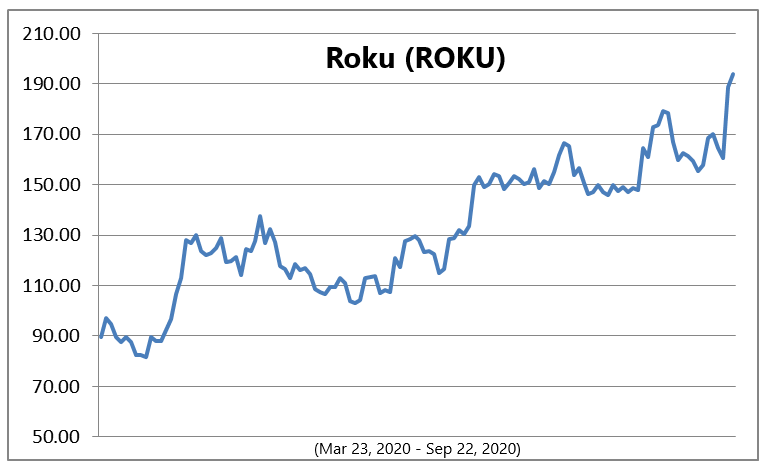 If, like me, you were born before 1970 then you may not fully appreciate the appeal of video streaming. I am able to sleep quite soundly at night knowing I may never be able to watch reruns of Two and a Half Men without access to Peacock.

But for younger viewers, video streaming makes a lot of sense. It’s less expensive than most cable television channel packages and more flexible.

You don’t have to wait until a specific day or time to watch your favorite program. If it is in the Peacock library, you can watch it whenever you like. Unlimited access to Peacock Premium costs $5 per month. For another $5 you can upgrade to an ad-free tier.

After its big jump on Monday, Roku had a stock market capitalization of roughly $24 billion. Not bad for a business that has not turned a profit and is deeply in debt.

Speaking of not making a profit, Roku’s gain this week was chump change compared to the 100% jump made by cloud company Snowflake (NYSE: SNOW) after its initial public offering (IPO) at $120 on September 16. If there is anything Wall Street likes better than a tech company that isn’t profitable, it’s an IPO for a tech company that loses money hand over fist!

On that score, Snowflake has delivered in spades. During the past year, Snowflake generated an operating income of negative $349 million on total revenue of positive $402 million. It’s a shame Snowflake didn’t lose more money, or else it may have tripled in value!

All kidding aside, Wall Street’s reaction to the Roku and Snowflake deals could signal a major shift in the stock market. At the same time that the tech-heavy NASDAQ Composite Index has declined 15%, a couple of relatively small tech upstarts have seen their values soar.

The problem is one of scale. The amount of money coming out of the mega-cap tech companies that dominate the major stock market indices is enormous while the recipients are tiny. Even at an inflated market cap of $61 billion, Snowflake is one-thirtieth the value of Apple (NSDQ: AAPL) at $1.83 trillion.

That’s why I believe the same thing could happen repeatedly with other small companies only now emerging as future market leaders. The trick, of course, is getting into them first before their share prices go through the roof.

If my hunch proves correct, there are some tremendous bargains available in the stock market right now. However, you won’t hear many of the talking heads in the mainstream financial media extolling their virtues.

That’s because the tech sector melt-up over the past six months has been very good to Wall Street. More than two-thirds of the float (shares trading) for Tesla (NSDQ: TSLA) and Amazon.com (NSDQ: AMZN) is owned by institutional investors.

By simply doing nothing over the past six months they have seen those positions increase 400% and 50% in value, respectively. Call it “Roku-nomics,” if you like.

My colleague, Dr. Stephen Leeb, has another name for it. He refers to the stock market’s recent behavior as “Reset 2020,” and the implications for investors is enormous. Buy the right stocks, and your financial future could be set. But buy the wrong companies, and you may be on the wrong side of the curve for the rest of your life.

That’s why he has taken the time to write a complete report on why this is happening and identifies one company that he believes could appreciate more than 300% in the coming years. To access this special report click here.