You know a trend has truly gone mainstream, when it gets its own global holiday that’s catered to by travel agents.

We already have 4/20 as “Weed Day,” the international marijuana holiday. We also have 4/19 as “Bicycle Day,” the anniversary of when Sandoz (now Novartis) chemist Albert Hofmann in 1943 ingested LSD and hopped onto his bike to ride, high as a kite, through Basel, Switzerland.

And now we have Global Magic Mushroom Day, which occurs every 9/20. Most countries ban magic mushrooms. In the U.S., mushrooms are illegal on the federal level but states and localities are increasingly lifting restrictions. At this year’s global celebration on Sunday, September 20, attendees vowed to make mushrooms legal everywhere.

Global Magic Mushroom Day has become a magnet for small businesses and entrepreneurs that cater to magic mushroom customers. As further evidence that mushrooms are going legit, you can find tourism agencies that will book for you an all-inclusive magic mushroom retreat as a vacation, in a country (e.g., Jamaica) where mushrooms are legal. The number of bookings tend to spike on and around 9/20.

As the Donovan song goes: “Fly Translove Airways, gets you there on time.”

Back in 2015, Nicholas Reville, a mushroom advocate from Providence, Rhode Island, proclaimed September 20 as an “educational day of action.”

The holiday has mushroomed (pun intended) into a major series of global events intended to raise awareness about the mental and physical benefits of psilocybin, the main psychoactive compound in magic mushrooms.

This year, the activities were largely virtual, due to the social distancing strictures of the coronavirus pandemic (as was the case with 4/19 and 4/20).

Nonetheless, mushroom advocates this year partook of the substance, enjoyed music, festivities and workshops, and delivered speeches for the legal normalization of ‘shrooms.

According to the manifesto of Global Magic Mushroom Day: “Our mission is to bring together as many people as possible to encourage dialogue, raise awareness and create community around the intelligent and beneficial use of psychedelic psilocybin mushrooms.”

Psilocybin, LSD and cannabis are showing promise in medical research for the treatment of anxiety, depression, post-traumatic stress disorder, and a wide range of other mental ailments.

Myths about these psychotropic substances are falling by the wayside. According to a recent study by the Independent Scientific Committee on Drugs, mushrooms are the safest recreational drug. The most harmful? Alcohol (see chart). 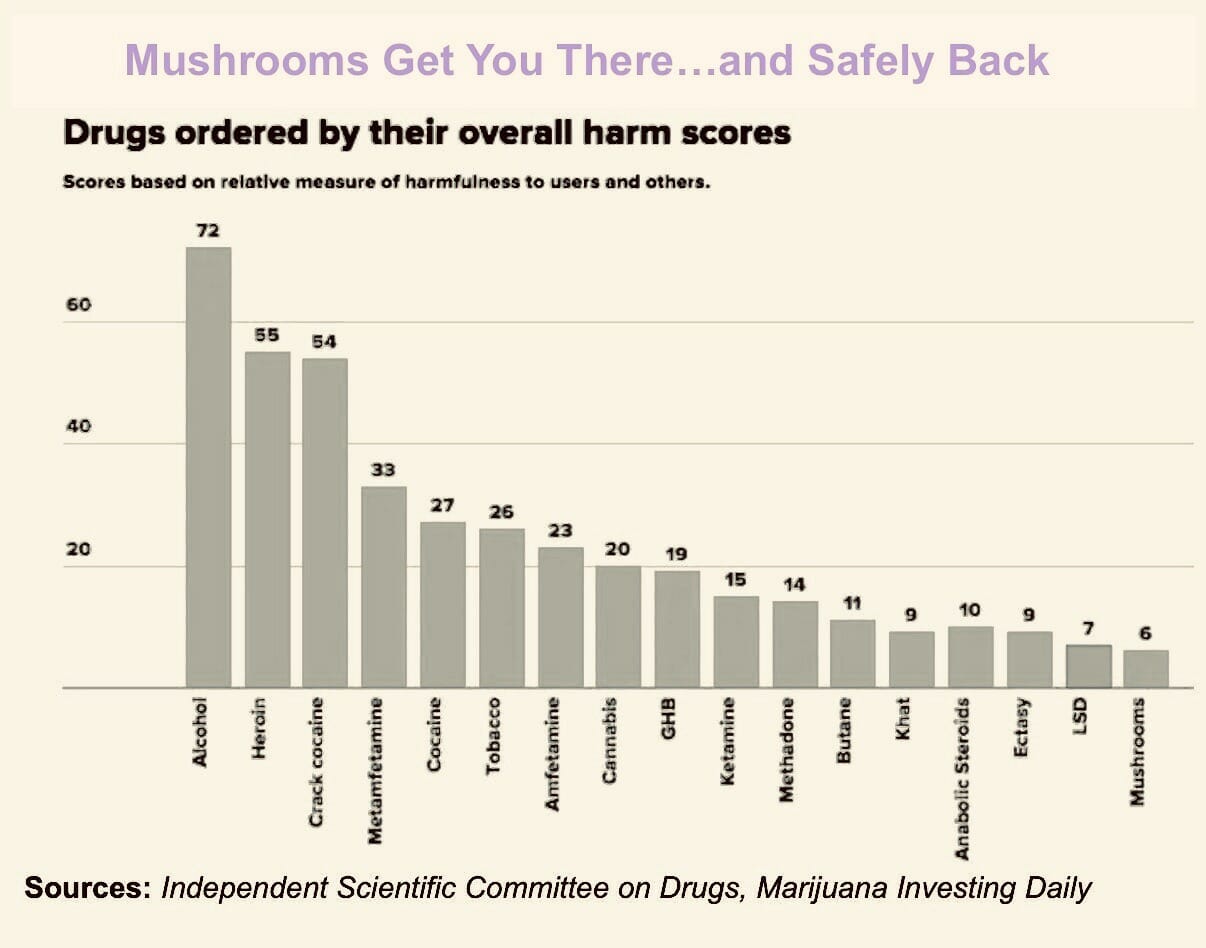 Global Magic Mushroom Day is trying to get the word out about the safety and benefits of mushrooms. As Reville puts it: “9/20 was chosen because it marks the beginning of autumn, when mushrooms are most plentiful; because it is close to the equinox, representing a change in direction; and because it echoes 4/20 and the successful movement for marijuana decriminalization and legalization.”

How did pot enthusiasts settle on the numerals 420? Therein hangs many an urban legend. Perhaps the most credible story is about five students at San Rafael (CA) High School in the early 1970s who would meet at 4:20 p.m. every day to partake, saying “420” to each other as code for marijuana. (The school’s extracurricular activities would end at 4:20 p.m.)

Fact is, no one really knows the exact derivation of 420. Regardless, over the past four decades, April 20 has become an international holiday for marijuana, when people get together to celebrate, consume and advocate for marijuana.

Psilocybin is following in the footsteps of cannabis. A movement is growing across the country to legalize and celebrate magic mushrooms.

The catalyst occurred in Denver, after voters in 2019 approved a ballot measure that made the city the first in the U.S. to classify offenses related to the psychedelic fungus among the lowest law enforcement priorities.

Health experts don’t consider psilocybin to be addictive, but the substance fell under the net of the federal government’s War on Drugs. States and localities are stepping into the breach.

The Denver ordinance seeks to reduce “to the greatest extent possible” criminal penalties imposed by the City of Denver “for the personal use and personal possession of psilocybin mushrooms.” Scores of cities are now trying to follow suit.

I’m keeping an eye on efforts to bring mushrooms into the consumer mainstream. In the meantime, we’ve pinpointed the best cannabis investments available. Click here to learn more.