Imitation is the sincerest form of flattery, or so they say. But don’t tell that to home fitness equipment maker Peloton Interactive (NSDQ: PTON). Peloton has seen its sales soar as home-bound Americans snap up its pricey stationary bikes.

Last week, rival exercise bike manufacturer Echelon (privately held) announced it is teaming up with e-commerce giant Amazon.com (NSDQ: AMZN). The two companies will compete head-to-head with Peloton but with products that are a fraction of the cost.

I can’t say that I’m surprised by this development. After it tripled in value three months ago, I opined that Peloton was fully valued and not likely to appreciate much more.

I was wrong about that. Since then, PTON has gained nearly 80% and shows no signs of slowing down. Over the past three weeks, PTON has gained ground even as the NASDAQ Composite Index was taking a tumble. 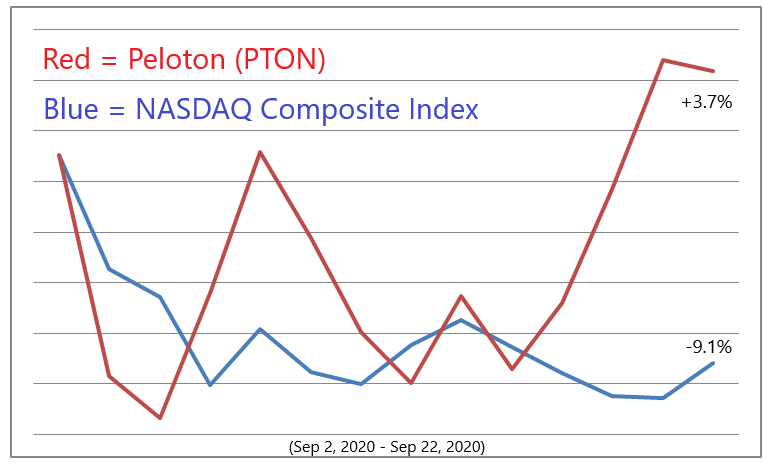 Usually, when Amazon goes after a business the stock market is quick to mete out punishment to its intended target. Three years ago, shares of Target (NYSE: TGT) bottomed out below $50 after Amazon announced it would acquire Whole Foods.

Since then, Target has tripled in value to more than $150 as it has successfully fended off Amazon’s foray into its market. Now, it is up to Peloton to prove that it can successfully defend its territory against Amazon’s assault with Echelon.

Based on the stock market’s initial reaction to the news, it appears nobody on Wall Street is too worried about Echelon. Peloton traded up nearly 5% the morning after Amazon’s partnership with Echelon was announced at the same time the NASDAQ Composite was trending downward.

At the risk of being wrong about the same stock twice, I believe PTON has become overbought. Currently valued at more than 200 times forward earnings, the stock is priced for perfection.

The reason that multiple is so high is that it assumes Peloton will be able to eke out a small profit in 2021. Since going public a year ago, Peloton has been operating at a loss.

As I noted last week, small companies like Peloton are benefiting from money moving out of overvalued large-cap stocks. Over the first three weeks of this month, huge tech stocks such as Amazon, Apple (NSDQ: AAPL), and Facebook (NSDQ: FB) have fallen by 15% or more.

That adds up to a lot of money. The combined market cap of those three companies at the start of this month was close to $5 trillion. Since then, more than $700 billion of stock market value has exited those three names.

So where did all that money go? To be sure, some of it was put on the sidelines and is currently sitting in cash or short-term bonds.

However, even if less than half of that amount went into small companies such as Peloton, the impact can be enormous. At a market cap of $28 billion, PTON requires only a tiny fraction of the money coming out of the huge companies to surge in value.

That may also explain why cloud software company Snowflake (NYSE: SNOW) doubled in value after its initial public offering two weeks ago. Snowflake also is highly unprofitable but that doesn’t seem to matter in this market environment.

A Change in Direction

The only thing that seems to matter to Wall Street at the moment is whether or not a company can survive the coronavirus pandemic. There is no doubt that the mega-cap tech giants will still be here a year or two from now. That’s why their share prices have soared over the past six months.

However, the rest of the stock market is up in the air. A second wave of COVID-19 later this year appears all but assured. If that happens, expectations for 2021 financial results may go out the window.

Read This Story: Economic Pundits: Wide of the Mark

In the meantime, investment capital will continue to flow into businesses that are immune from the coronavirus pandemic. Amazon’s partnership with Echelon may be only the first of many such mutually beneficial arrangements.

My colleague, Dr. Stephen Leeb, has coined a term for the stock market’s recent behavior. He calls it “Reset 2020,” and he believes it signals a paradigm shift in how equities will be valued in the years to come. To learn more about this shift and how to profit from it, click here for our special report.