In 1992, while running for the presidency, Bill Clinton was confronted by a reporter about marijuana use and his disingenuous response became infamous: “I didn’t inhale it, and never tried it again.”

Fast forward to the 2008 campaign of Barack Obama. When asked the same question, Obama simply said: “When I was a kid I inhaled frequently. That was the point.”

The difference in those two quotes encapsulates the change in attitudes regarding marijuana.

According to a new report released this week from research firm New Frontier Data, state ballot measures slated for 2020 in five states (Arizona, Mississippi, Montana, New Jersey and South Dakota) could be the catalyst for adding $9 billion to the size of the nation’s legal cannabis market if all are approved by voters this November.

“The 2020 election could be one of the most consequential and historical events to change the landscape of the legal U.S cannabis industry. With $9 billion in new revenue from 2022-2025, should all five state ballot measures pass, New Frontier Data estimates that revenues from all legal U.S. markets will reach $35.1B in 2025.”

By the end of 2020, nearly all U.S. states could end up allowing some form of legal marijuana, including a few “deep red” states. In fact, many conservative Republicans are jumping aboard the legalization bandwagon.

Let’s look at the latest legal and regulatory developments in marijuana, hemp and other psychotropic substances.

The Small Business Administration stated this week that marijuana businesses hurt by recent wildfires on the West Coast are ineligible for federal relief funds. However, marijuana operators whose homes have been damaged may still be able to get assistance.

Candidates for the West Virginia House of Delegates this week held a press conference in a hemp field to unveil the details of a sweeping marijuana legalization bill they intend to introduce if elected. Among other provisions, the proposed bill would expunge cannabis criminal records dating to 1937.

The U.S. House bill to deschedule marijuana and fund programs to repair the damage to human lives of the drug war got one new cosponsor for a total of 114.

Drugs, substances, and certain chemicals used to make drugs are classified by the U.S. Drug Enforcement Administration into five distinct schedules (i.e., categories) depending on the drug’s acceptable medical use and the drug’s abuse or dependency potential.

Schedule I drugs are considered to have a dangerous potential for abuse and dependency. Marijuana falls into Schedule I, under the Controlled Substances Act. Hence, “descheduling” is tantamount of decriminalizing. 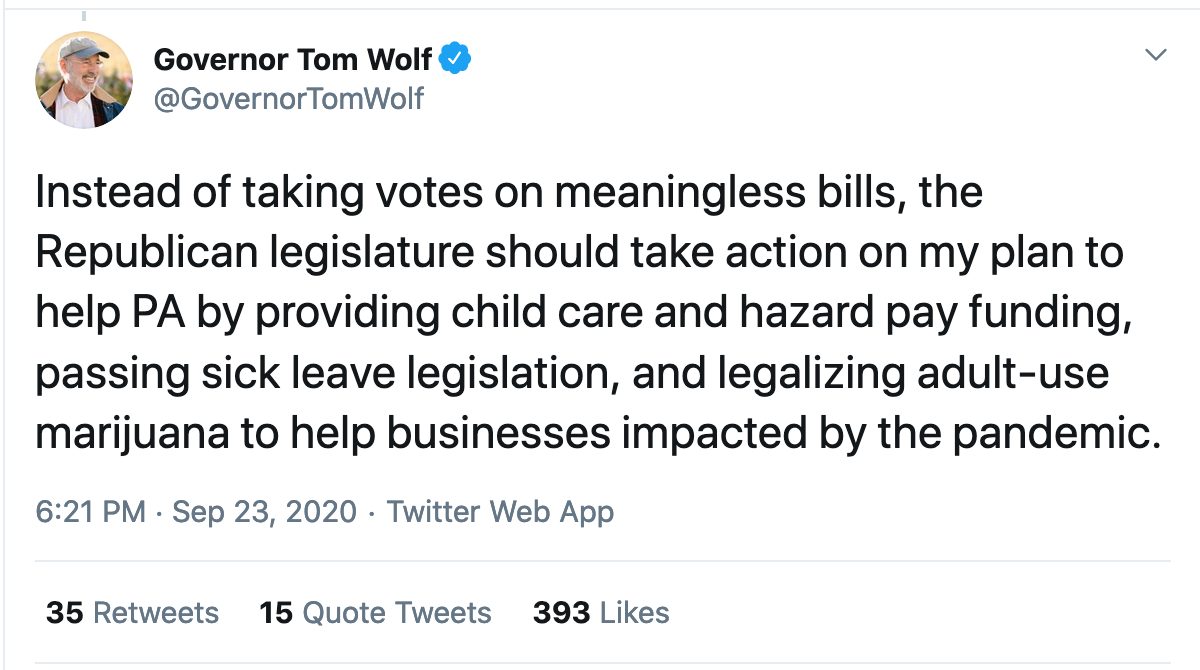 Pennsylvania’s lieutenant governor tweeted: “Last year, nearly 22,000 people in PA were arrested for having less than 30 grams of cannabis. Imagine how we could better devote that time and those resources, instead of prosecuting people for something most of us don’t even think should be illegal.”

Indiana Democratic gubernatorial candidate Woody Myers tweeted: “Thank you again to @INORML for giving me the ‘Best Cannabis Politician in Indiana’ award this year. We need criminal justice reform and legal medicinal marijuana to ensure a healthy and just society.”

The Vermont Legislature this week approved legislation that would set up a system to legalize the sale of recreational marijuana by creating a cannabis control board and setting up how such sales would be taxed.

Republican Gov. Phil Scott said he will “take a look” at the legislation when it reaches his desk before he decides what to do. His options include signing the bill, vetoing it or allowing it to become law without his signature. Political insiders in the Green Mountain State expect Gov. Scott to eventually sign the bill.

The Ann Arbor, Michigan City Council voted unanimously this week to decriminalize a wide range of psychedelics, including psilocybin (the psychotropic substance found in “magic mushrooms”), ayahuasca and ibogaine.

Whether it’s decriminalization or full legalization, the mainstreaming of marijuana is a trend that can’t be stopped. After painstaking research, we’ve pinpointed cannabis investments with the greatest profit potential. Click here for our report on the best pot stocks.