Market Carnage: Closer Than It Appears?

Remember those moments in horror films when something frightening lunges at you? Directors of the genre have perfected the effect. Hollywood calls it the “jump scare.” That’s when the monster (or whatever it is) leaps straight at the camera, suddenly and without warning, to literally make viewers jump out of their seats.

You should brace yourself for lots of jump scares, of the investment variety, in the weeks leading up to the November election. Anything can happen.

Thursday was a particularly volatile day, with stocks bouncing between the red and green before finally closing with modest gains. The Dow Jones Industrial Average rose 52.32 points (0.20%), the S&P 500 gained 9.67 points (0.30%), and the tech-heavy NASDAQ rose 39.28 points (0.37%). All three indices were lower in pre-market futures trading on Friday.

Stocks started to swoon yesterday in the wake of President Trump’s remarks that he might not honor the results of the November election if he lost. However, reassurances from key members of Congress that the final vote would be respected helped stocks pull a U-turn and close higher. Also lifting shares was an upbeat housing report.

The U.S. Census Bureau reported on Thursday that sales of new homes in August unexpectedly advanced for a fourth consecutive month to the highest level in nearly 14 years, as historically low mortgage rates continued to attract buyers (see chart). 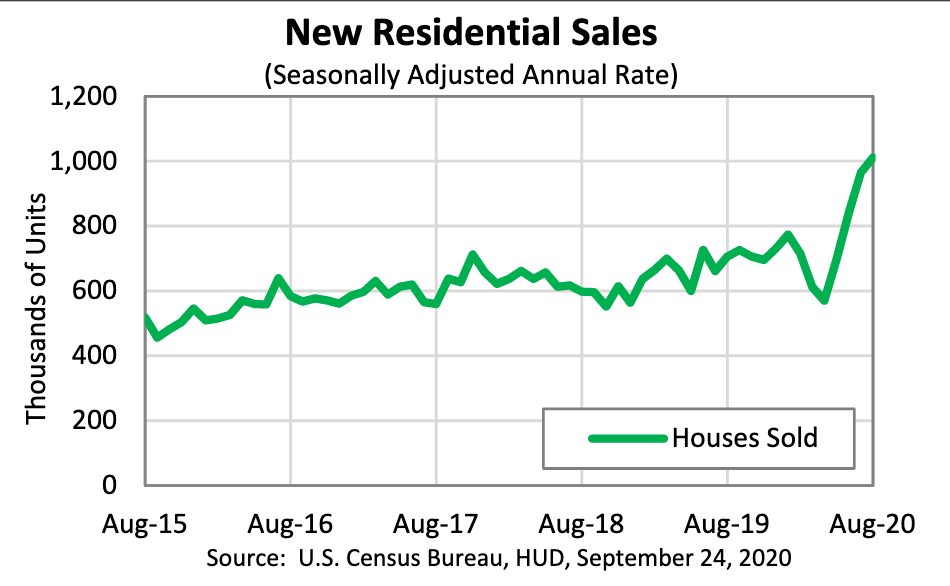 The winter of our discontent…

Thursday’s choppy trading was yet another indication that investors must grapple with sharp volatility in the run up to the election and probably afterwards.

Spooking Wall Street is the chance that the winner of the November presidential election won’t be known for weeks or even months. A contested election could generate social dislocation. The financial community is prepared to accept either Trump or Biden as the winner, but it’s not prepared to accept banana republic-style mayhem in the streets.

The CBOE Volatility Index (VIX), a widely followed gauge of market volatility, has hovered in the high 20s even though stocks have steadily recovered from their pandemic lows.

Instead of waning, the COVID-19 pandemic is worsening and triggering reimposed lockdowns in some areas. Despite yesterday’s positive home sales report, the economy is generally backsliding.

Also contributing to investor unease is the inability of Congress to come through with another fiscal stimulus package, despite massive unemployment and rising small business bankruptcies.

The Labor Department reported yesterday that new unemployment claims increased last week for the second time over the last month. In the week ending September 19, the advance figure for seasonally adjusted initial claims was 870,000, an increase of 4,000 from the previous week’s revised level.

The job market recovery has shown signs of stalling in September, just as colder weather starts to close business operations that had moved outdoors to contain the virus. The advent of winter flu season, coming on top of the pandemic, poses a serious public health threat.

As of this writing on Friday, the number of confirmed coronavirus cases in the U.S. had reached about 7 million, more than 20% of the world’s total, with more than 202,000 deaths. Midwestern states this month are reporting spikes in COVID-19 infections.

As the resurgent pandemic weighs on the broader stock market, executives and officers at S&P 500 companies haven’t been bargain hunting. Just the opposite. These insiders have been unloading stakes in their respective companies at an accelerating pace, a clear warning sign of trouble ahead.

No one is in a better position to judge a company’s prospects than the people running it. You should be concerned that insider selling has expanded to a bearish level.

During the sell-offs we’ll likely experience ahead, should you buy on the dips? There’s a Wall Street saying: never try to catch a falling knife. A falling investment could rebound. Or it could lose more value. Trying to predict the bottom is like grabbing a knife on its way down. Pain usually ensues.

Use stop-losses when buying stocks and don’t chase ostensible bargains. One of the best defensive measures you can take now is to make sure your portfolio is diversified. Sounds obvious, but like a lot of simple rules that make sense, this one often gets ignored.

Editor’s Note: To help you cope with the mounting dangers that I’ve just described, we’ve put together a special report called Reset 2020. America faces an economic “reset” that will revolutionize the way we work, save and invest. If you want to financially survive this reset, you must get into the right kinds of investments now. Click here to access our eye-opening report.