When I attended Boston University during the turbulent 1970s, the campus was frequently roiled by student demonstrations for one cause or another. A prevalent protest slogan was: The revolution will not be televised! Taken from the title of a popular song, the catchphrase meant society was undergoing profound changes that transcended consumerism.

I’ve come up with a new slogan, more appropriate for our times: The revolution will be televised. To be more precise, streaming multimedia technology is a revolution in its own right…as well as an investment trend with long-term momentum.

To learn what I mean, watch my latest video presentation. I amplify my remarks in the following article.

However, you can find smaller value plays in these futuristic technologies, if you know where to look. Below, I’ll point you toward a source of bargain priced stocks in the vanguard of the revolution that are poised to soar. First, let’s re-cap recent stock market action and get a sense as to where stocks might be heading.

September has been a rough month for the stock market. Massive unemployment remains a concern. The U.S. Labor Department reported last Thursday that new unemployment claims increased for the week ending September 19, the second increase over the last month.

Also dampening Wall Street’s mood are rising Sino-American trade tensions, diminishing hopes for a coronavirus vaccine, the stalemate in Congress over fiscal relief, the fight over a Supreme Court vacancy, and fears that the November elections will descend into violence and chaos. 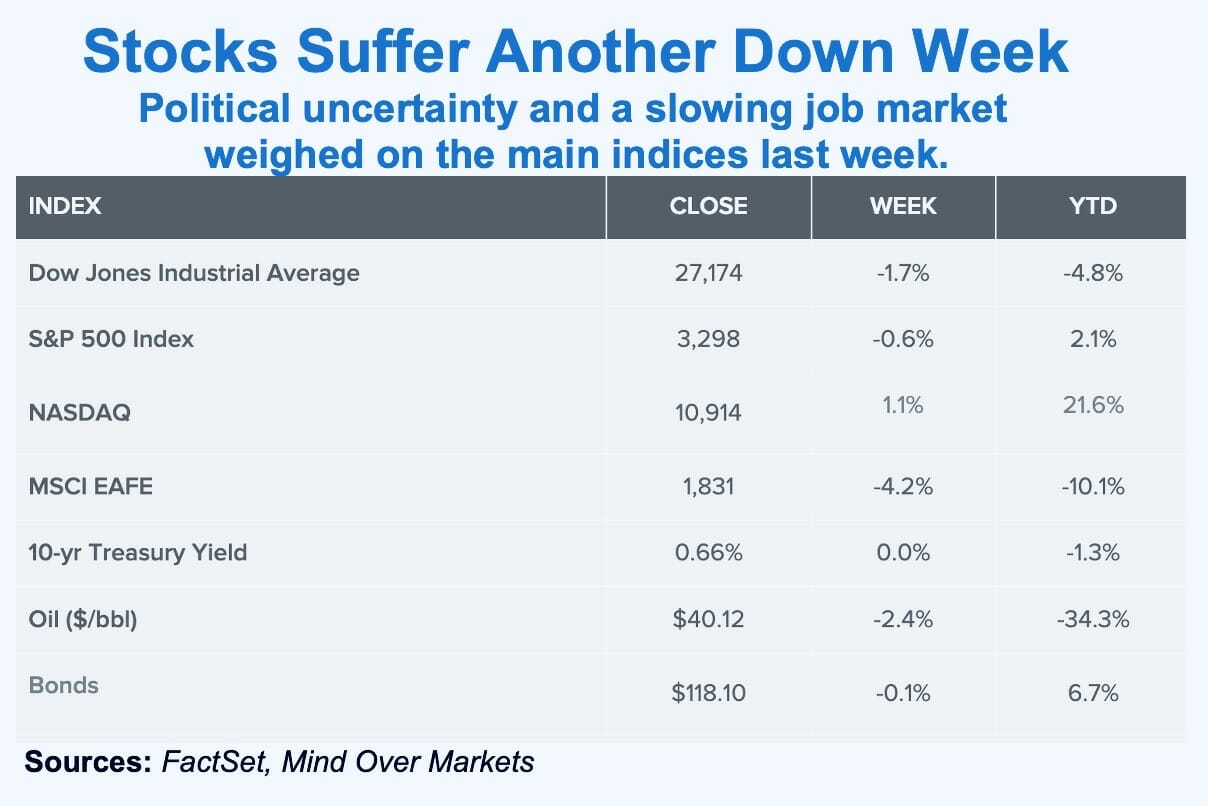 Wall Street usually takes politics in stride because both parties pay fealty to business and financial interests, but this electoral season is marred by the sort of turmoil you’d expect in a banana republic.

The financial community can stomach either Trump or Biden winning, but it can’t stomach talk of the military possibly getting involved to quell election protests. Buckle up for extraordinary market volatility in the coming days.

And yet, when surveying the long-term horizon, I remain an optimist. Once we’ve put the coronavirus and electoral uncertainty behind us, we face a technological renaissance that will power stocks to the next secular bull market.

America has been through tough times before and I’m fully confident we’ll get through 2020. When I was a long-haired college undergraduate, we lamented that Vietnam and Watergate had killed the American dream. The stock market was in the dumpster. But our country (and stocks) eventually came roaring back, stronger than ever. The lesson? Always stay invested.

Around the world in 60 seconds…

You’ve probably heard of the expression “in a New York minute,” to denote an extremely short period of time. Today, I want you to consider an Internet minute.

According to data compiled by Visual Capitalist and released on September 15, a single Internet minute holds more than 400,000 hours of video streamed on Netflix, 2,704 app applications, 500 hours of video uploaded by users on YouTube, and nearly 42 million messages shared via Facebook’s WhatsApp.

That same Internet minute also entails more than 6,500 packages shipped by Amazon as well as 208,333 participants in meetings via the app from Zoom Video (see infographic). 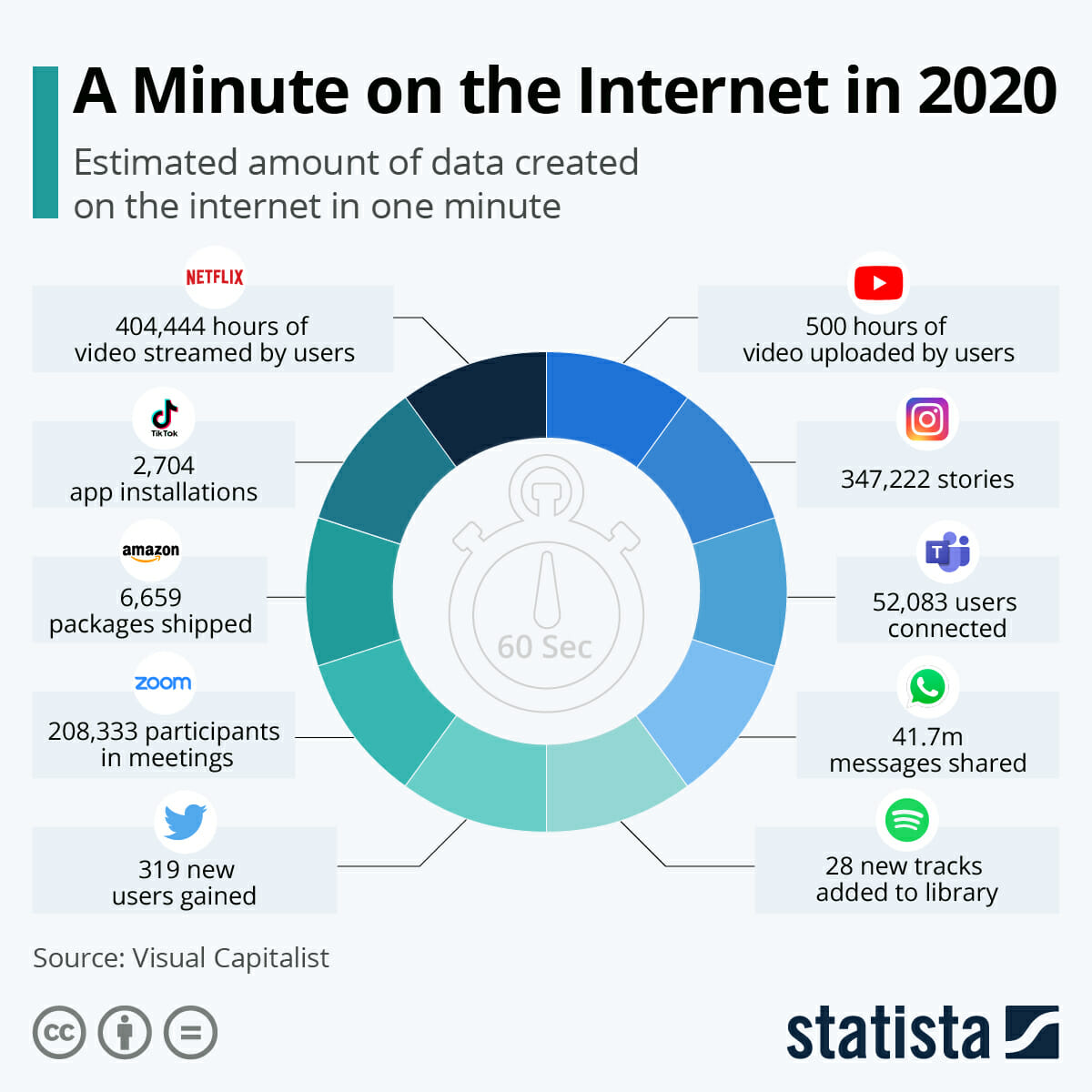 Before we even heard of the coronavirus, the transition to a wireless, highly mobile world already was underway. The global pandemic has acted as an accelerant for that transition. For example, bricks-and-mortar shopping malls were losing ground to e-commerce. Now, those malls have been quickly put out of their misery.

Fossil fuels were in growing disfavor; the pre-existing adoption of green technologies got a big boost from the pandemic’s destruction of oil and gas demand.

If you need further evidence that Big Oil is in decline and digital technology is in the ascendancy, consider the fate of blue chip Exxon Mobil (NYSE: XOM). The Dow Jones Industrial Average in August booted Exxon Mobil from its 30-stock index to replace it with cloud solutions provider Salesforce (NYSE: CRM). John D. Rockefeller, who founded XOM’s precursor Standard Oil, must be turning in his grave.

At the heart of this technological watershed is the global implementation of ultra-fast 5G (“fifth generation”) wireless technology. The following chart underscores the multi-year growth trajectory of 5G adoption around the world: 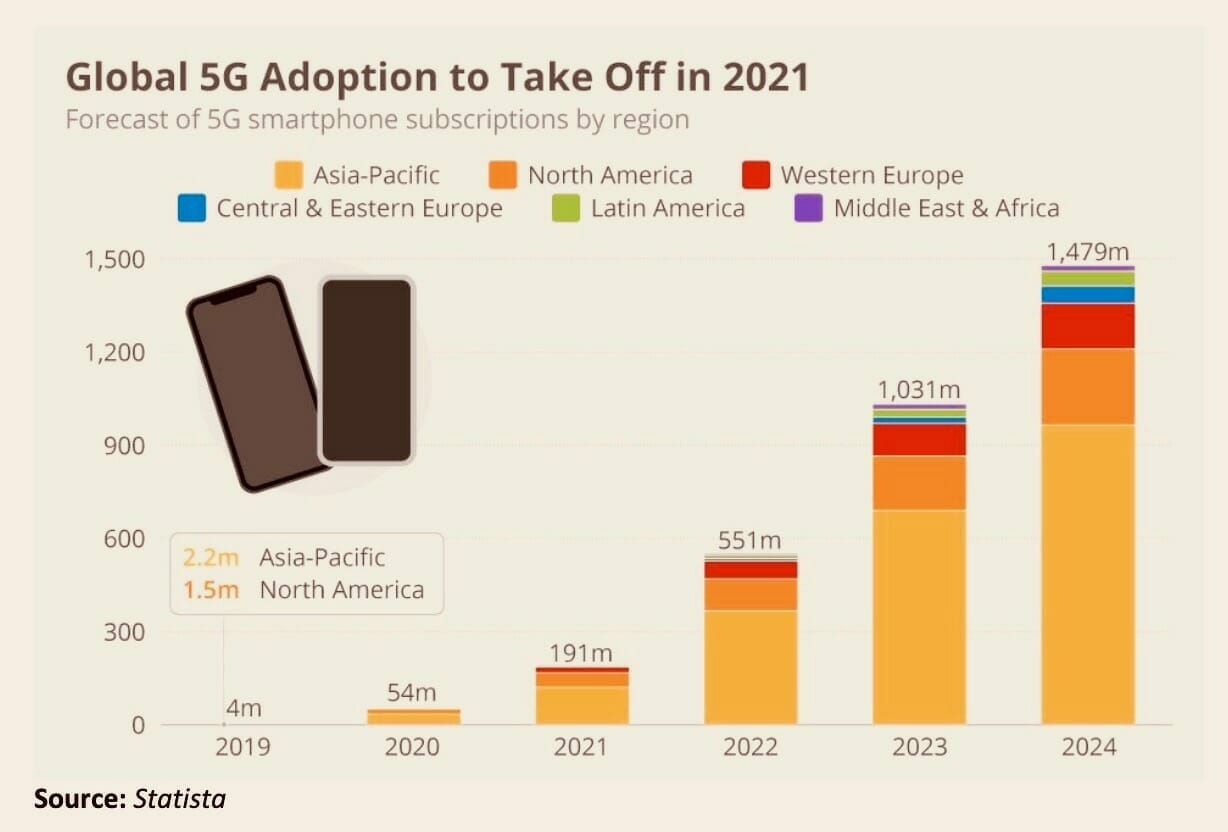 As wireless and remote technologies revolutionize the world, 5G is revolutionizing the digital world. 5G is essential to the development of cutting-edge technologies, such as autonomous vehicles, telemedicine, remote robotics, and 3D holograms in virtual/augmented reality…to name only a few.

We’ve put together a special report that provides details on specific companies essential to the 5G rollout that you can start making money off right now.

These companies are on the cusp of the 5G wave. You need to tap into these stocks…in an Internet minute. Click here for our special report.