A Question of Confidence

That begs the question: How much confidence should we have in the stock market right now? The month of September witnessed several troubling developments that suggest the economy may be a lot weaker than the stock market suggests.

On September 16, the Federal Open Market Committee (FOMC), the Federal Reserve’s policy-making arm, released a rather remarkable statement. The FOMC announced that it would keep short-term interest near zero through the end of 2023. It also vowed to continue buying U.S. Treasury and mortgage-backed securities as long as necessary to ensure there is sufficient liquidity in those markets.

If the economy were expected to fully recover within the next year, the FOMC would have no reason to extend its commitment to backstop the bond market for the next three years. Such a clear departure from the Federal Reserve Board’s dual mandate of maximizing employment while moderating long-term inflation risks speaks volumes about the current state of the economy.

One week later, we learned that new unemployment claims increased for the second time in the previous month. After steadily declining since late July, the number of Americans losing their jobs appears to have leveled at more than 800,000 per week. Hence the FOMC’s decision the week prior making it less expensive for businesses to borrow money and retain staff instead of cutting jobs to save money.

The FOMC’s recent actions suggest it may take a lot longer than most people realize for the economy to get back on track. If so, then investor confidence may begin to wane over the remainder of the year.

That lack of confidence in the economy carried over to the stock market last month. From its intraday high on September 2 to its low on September 24, the S&P 500 Index fell by 10.6%. A decline of that magnitude meets the technical definition of a correction.

Oddly, nobody on Wall Street seems to really care about that yet. The reason is that in terms of time, that decline put the index back to where it was just two months prior. The index still hovers in positive territory for the year.

You could not tell the stock market was under duress based on the behavior of the CBOE Volatility Index (VIX), or “fear index.” The VIX closed last week almost exactly where it ended the month of August (small circle in chart below). 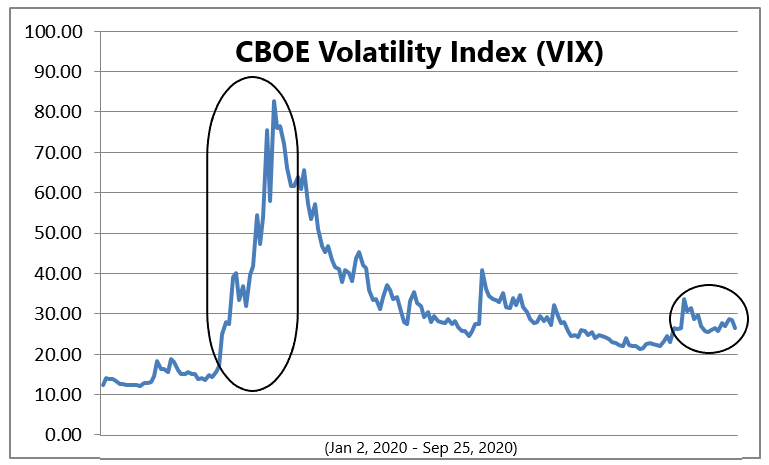 Normally, a stock market correction would trigger a temporary spike in the VIX as institutional investors hedge their equity portfolios by purchasing put options on the S&P 500 Index. That way, they can cash in those options at inflated prices if the stock market crashes.

During the middle two weeks of February, the VIX doubled in value as the coronavirus pandemic drove stock prices lower. Two weeks later it had more than doubled again before leveling off at five times its value from only a month prior (big circle in chart above). That isn’t happening this time.

You also could not tell anything was wrong in September based on the price of gold. After peaking above $2,000 per ounce in late August, the price of gold dropped below $1,900 three weeks later.

Oil prices have also been remarkably stable despite the stock market’s recent weakness. Over the past three months, the price of a barrel oil has traded within 10% of $40 after plummeting in April.

All of those data points suggest a simple explanation for the apparent lack of concern in the stock market’s recent decline. The money coming out of stocks went into bonds based on the FOMC’s promise to keep interest rates low for at least the next three years.

If that is indeed the case, the stock market may not have much further to fall in the near term. We may have reached an equilibrium in the value of stocks, bonds, gold, and oil that will remain in place until the outcome of the general election in November is known.

As much as I would like to believe that is the case, I’m afraid that stock market volatility may soon erupt. Later this month, most companies will release their next round of quarterly results. In five weeks, we will know the initial results of the general election on November 3.

What that suggests to me is that the financial markets may have been bracing for impact during the past month. If I am right about that, I would expect to see a gradual rise in the VIX in October along with an uptick in the price of gold. If that happens, the fourth quarter of this year may be a lot like the first quarter.

Dr. Leeb has coined a term for the stock market’s recent behavior. He calls it “Reset 2020,” and he believes it signals a paradigm shift in how equities will be valued in the years to come. To learn more about this shift and how to profit from it, click here for our special report.