Dawn of the Age of the Robots

Hear those footsteps? The robots are coming.

The headline to my article today sounds like a science fiction thriller, but I assure you, it’s science fact. For proactive investors, the robotics industry can bestow once-in-a-generation opportunities.

Let’s put aside the daily roller-coaster of the financial markets to take a “big picture” view. New reports on the exponential growth of robotics were released in recent days that warrant your attention. I also steer you toward a source of market-beating investment profits in today’s post-industrial “reset.”

President Trump argues that too many jobs are being shipped overseas to take advantage of cheaper labor and his administration has imposed protective tariffs to bring those jobs home. This month, the global trade war has flared anew, as the U.S. slaps new sanctions on China-based companies.

What’s mainly killing jobs, though, is automation. America is losing more jobs to technology than to foreign workers. Here’s the good news: This “creative destruction” benefits our society in the long run.

In the services sector, which tends to generate higher-paying jobs than in manufacturing, the U.S. runs a healthy trade surplus. Robots are taking over repetitive, low-paying jobs, which makes it possible for America to be an incubator for skilled, higher-paying jobs.

The International Federation of Robotics (IFR) released a report on September 24 that confirms the accelerating pace of industrial automation. The number of robots operating in factories around the world currently marks the highest level in history, for a total of 2.7 million in 2019.

According to the IFR’s World Robotics 2020 Industrial Robots report, the annual worldwide shipment of new units has significantly grown since 2009 (see chart). 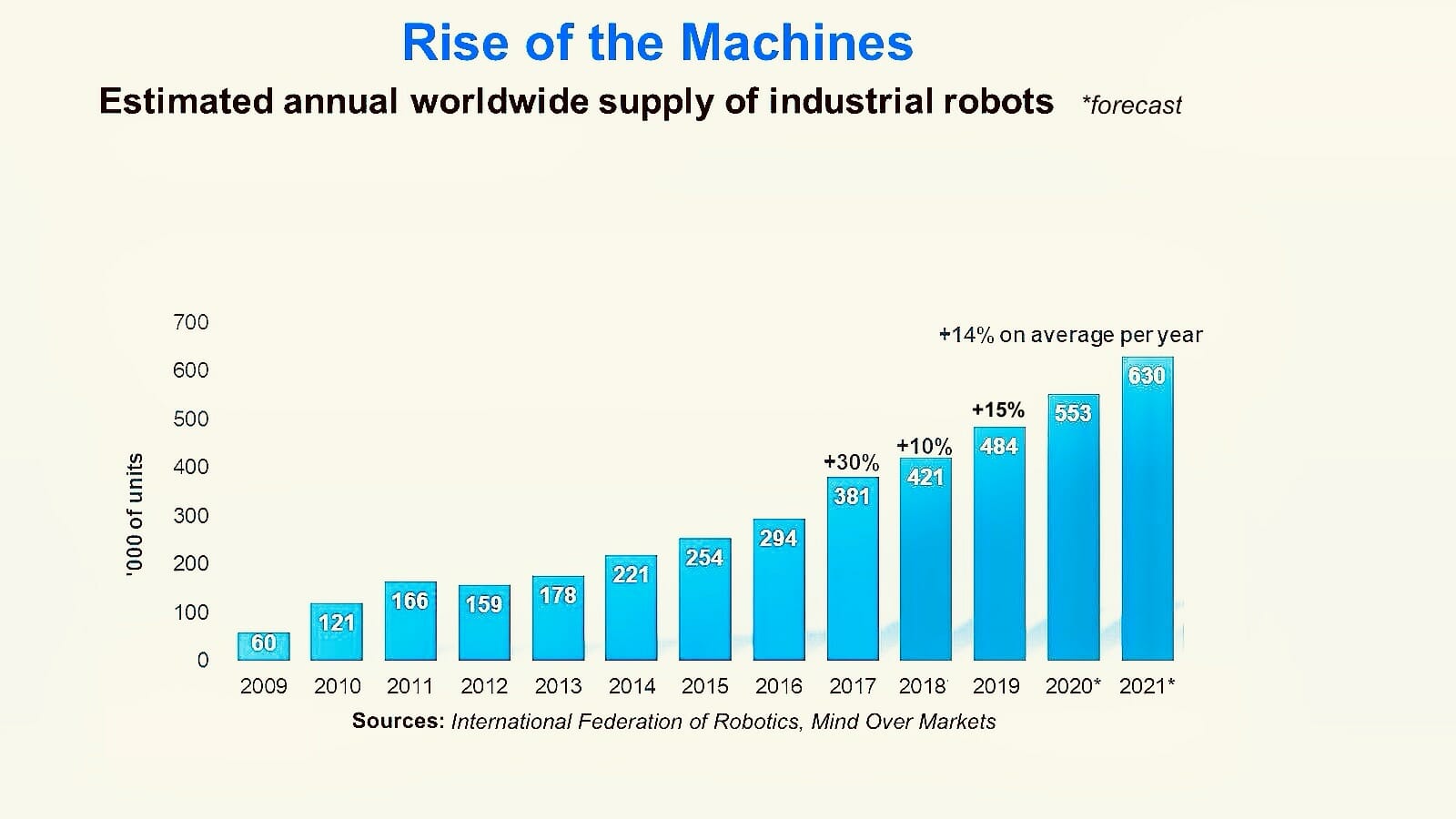 The share of newly installed robots in Asia represents about two-thirds of global supply. The leader in Europe is the region’s economic powerhouse of Germany; the leader in the Americas is the United States.

The IFR report notes that the pandemic offers a chance for modernization and digitization of production to expedite economic recovery. Over the long haul, the benefits of increasing robot installations will remain the same, even after the virus is gone: Rapid, cost-effective production and delivery of products at competitive prices.

Programmable robots are spreading beyond industrial uses to permeate myriad aspects of daily life, as they get embedded with artificial intelligence and integrated into the Internet of Things. For example, retailers such as Amazon (NSDQ: AMZN) and Walmart (NYSE: WMT) are increasingly automating their distribution capabilities with robots, especially as supply chains become stretched to accommodate far-flung emerging markets.

You might be surprised to learn that South Korea boasts the highest robot density in the world, with 855 installed industrial robots per 10,000 employees. That’s largely due to the installation of high volume robots for electronics, a key sector in South Korea’s sophisticated economy.

Japan and Germany come in second and third, respectively, in terms of robot density. Al three countries are heavily reliant on automotive manufacturing, which in turn relies on robotics.

The following chart, released September 28 by the research firm Statista, tells the story: 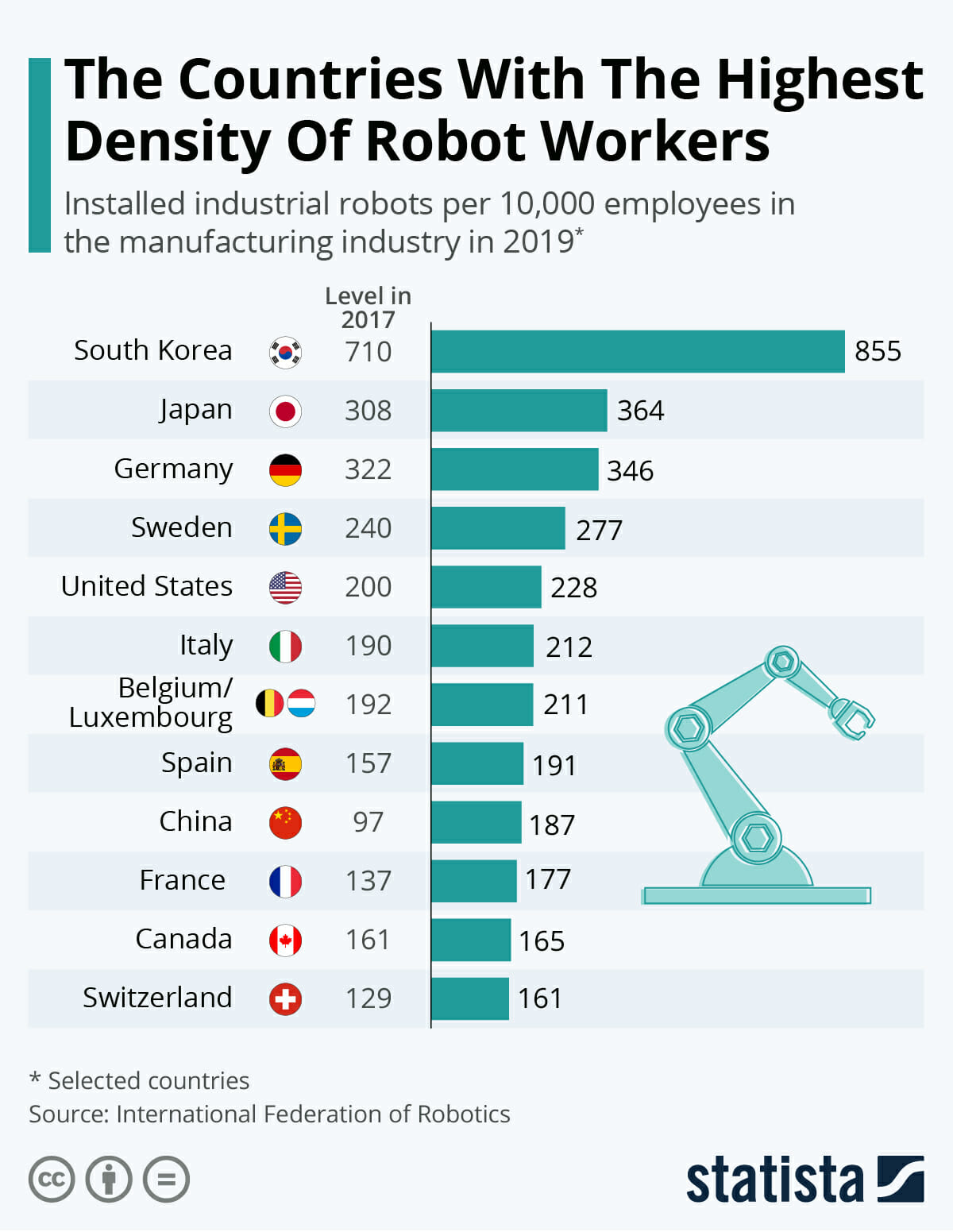 Social distancing during the pandemic has boosted the use of robots, in various industries from retailing to manufacturing. This trend will gain speed in the post-COVID world. Indeed, many workers laid-off or furloughed because of the pandemic will permanently lose their jobs to robots. These machines are adopting an increasing number of tasks in all facets of daily life; the pandemic is hastening this transition.

Our investment team has put together a special report on the historic, multi-trillion-dollar shift now occurring in the American economy. Called Reset 2020, our report shows how leading-edge technologies are fueling this shift.

Facilitating the installation and networking of robotics systems will be super-fast 5G wireless technology. 5G makes robotics even more efficient, by easing the way for innovations such as collaborative robots, aka “cobots.”

5G’s inexorable momentum spells opportunity for the shareholders of the chipmakers, telecoms, systems builders, and device makers that benefit from lightning quick connectivity.

Over the long haul, the biggest stock market winners are companies that defy the status quo and introduce disruptive new technologies that create entirely new industries and products. The emergence of 5G and its growing role in robotics represents a similar window of opportunity.