Political Turmoil: Look Beyond the Static

I used to work in Congress as a staffer and not for a member of the Ivy League-East Coast elite. My boss was U.S. Rep. Byron Dorgan (D-ND), a hard worker and common sense moderate. Byron grew up on a farm and he actually referred to my duties as his press secretary as my “chores.”

One of the skills that I learned from my days of toiling in Congress is the ability to separate white noise from substance. I’m here to tell you that the unruly Trump-Biden presidential debate Tuesday night was a lot of static. The same goes for any legislative deliberations in Congress for the rest of 2020.

Change the channel and keep your eye on 2021, when the economy should gain traction and the election is behind us. In the meantime, stick to your long-term strategic goals.

The three main U.S. stock market indices traded for most of the day Tuesday in strongly positive territory, as talks resumed in Washington, DC over competing versions of pandemic relief. Investors were placing their hopes on the talks succeeding. But when those talks broke down (yet again) late in the afternoon, stocks reversed direction and closed lower.

The Dow Jones Industrial Average yesterday lost 131.40 points (-0.48%), the S&P 500 shed 16.13 points (-0.48%), and the tech-heavy NASDAQ fell 32.28 points (-0.29%). Stock futures Wednesday morning were trading sharply down as Wall Street continued to fret about the election and the fading chances of fresh fiscal stimulus. As of this writing today before the opening bell, the Dow is poised to open about 150 points lower.

I won’t unequivocally assert that new fiscal relief is stone cold dead, but I will tell you that it’s on a ventilator and unlikely to survive.

The increasing unlikelihood that we’ll get a new stimulus package is weighing on stocks. These waxing and waning expectations will probably continue roiling markets, right up to the November 3 election. Making investment decisions based on Washington’s election-season shenanigans would be foolish.

Whenever Wall Street gets all hot and bothered about the possibility of new fiscal relief, I have to shake my head. Investors are setting themselves up for disappointment.

The House has proposed a new relief package that totals about $2.4 trillion, serving as a scaled-down version of the $3.4 trillion HEROES Act passed by the House earlier this year. The bill includes additional stimulus checks, funding for state and local governments, and expanded unemployment benefits.

The White House and Senate GOP have pushed for a much smaller bill that would provide between $1 trillion and $1.5 trillion in new aid, with less money for the unemployed and states and localities and more assistance for big business.

Democrats call the Senate version heartless and a giveaway to corporate interests; Republicans call the House bill a left-wing wish-list. The ideological divide appears unbridgeable, especially as the two parties bitterly battle over the Supreme Court vacancy caused by the death of Ruth Bader Ginsburg.

I often view gridlock in Washington as a good thing. I figure hey, it means lawmakers will do less damage and investors can breathe a little easier. But not in this case. The recession is getting more severe, the pandemic is resurgent, and assistance for millions of jobless Americans has expired.

How dire is the situation of average working people? The following infographic reveals the number one item on which Americans spent their first round of stimulus checks. It was food. 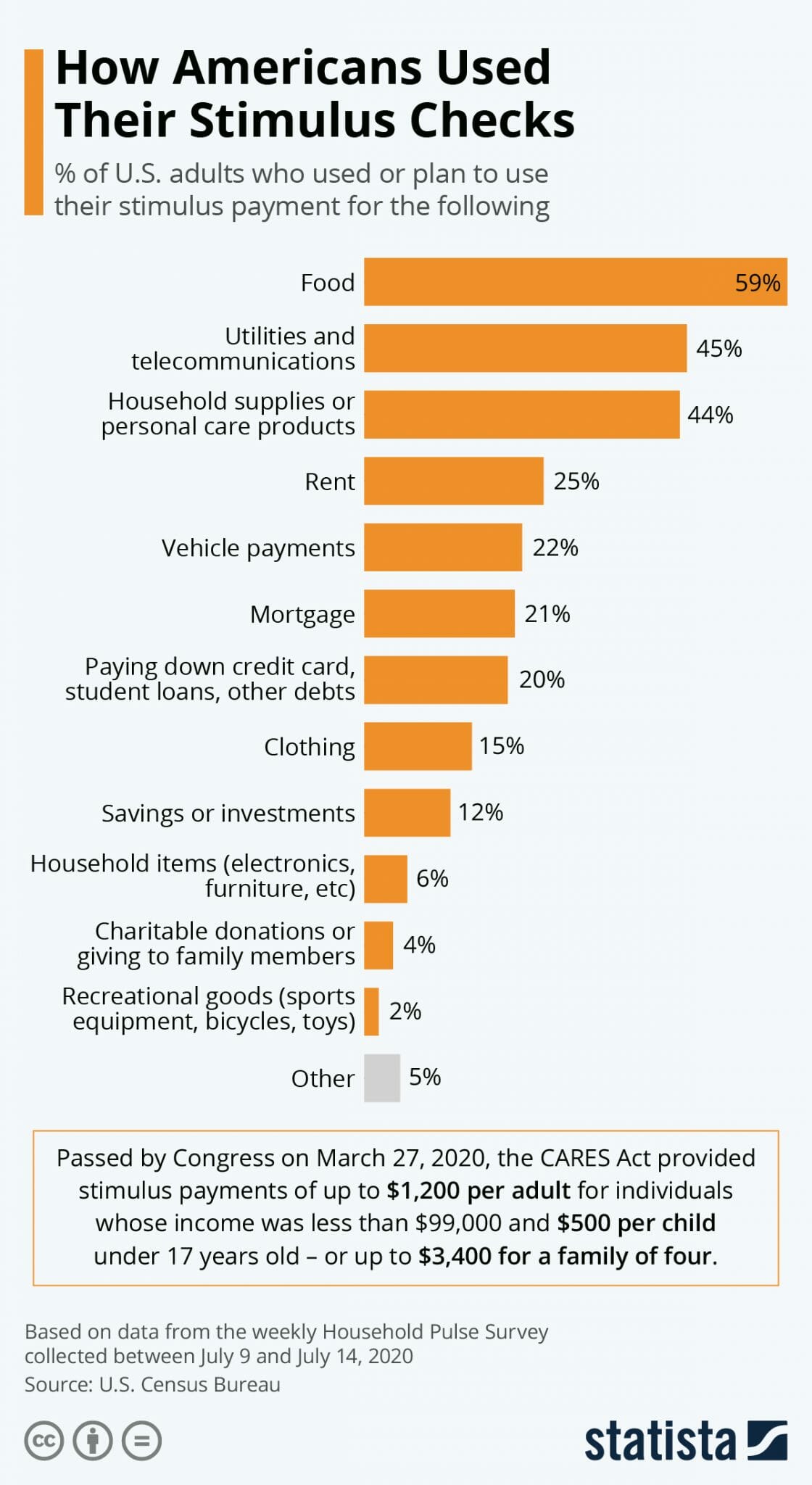 Within this Statista data, though, there’s an insight for investors. The number two item is utilities. During the coronavirus-induced recession, you should increase your portfolio’s exposure to companies that provide essential services, notably utilities.

Regardless of virus fears and mass unemployment, everyone needs electricity and they find a way to somehow pay the power bill. That makes utilities recession-resistant. For our list of high-quality utilities stocks, click here.

Small businesses, which account for most employment, are declaring bankruptcy in record numbers. States and localities face crippling budget deficits and they’re already laying off public workers. The failure of Congress to act on fiscal stimulus should worry you. It’s a bearish sign.

The impasse in Washington over new coronavirus relief will cause slower-than-expected economic growth at the end of 2020, Goldman Sachs (NYSE: GS) predicted in a note to clients last Thursday. “We now think that any further stimulus will wait until early 2021,” Goldman analysts asserted, cutting their forecast for fourth quarter gross domestic product in the U.S. to 3%, down from 6%.

Editor’s Note: The middle class is under siege and it’s not just from the coronavirus. The dichotomy between the haves and the have-nots is getting wider, with the American economy rewarding the upper one percent and leaving everyone else in the dust.

Those are the conclusions of a new report put together by our investment team. Called Reset 2020, this eye-opening study looks at the epochal shift occurring in the American economy. This report lays out the right steps to prepare (and profit) now, before it’s too late, from this reset. To discover what you need to know, click here to access Reset 2020.