During the Trump-Biden political contest for the White House, veteran consultant James Carville has been appearing a lot on cable news. Seeing Carville’s grizzled face on television reminds me of something he said way back in 1993, when he was Bill Clinton’s advisor:

“You mean to tell me that the success of the economic program and my re-election hinges on the Federal Reserve and a bunch of [expletive deleted] bond traders?”

Fast forward to today and all eyes are once again on the bond market as a gauge of economic health. The bond market is warning that the economy is in deep trouble, but the stock market isn’t paying heed. It reminds me of my toddler grandkids, when they cover their ears and say: “La-la-la, I can’t hear you.”

Stocks have gotten a lift this week from optimism that a coronavirus relief package will somehow get passed. Ostensibly positive employment numbers also are cheering investors. I think optimism on both counts is unwarranted.

U.S. private employers increased hiring in September, but expired government assistance and a flare-up in new COVID-19 cases are impeding the labor market’s recovery from the pandemic.

The ADP National Employment Report released on Wednesday showed that private payrolls grew by 749,000 jobs this month after rising 481,000 in August. The consensus expectation had called for a rise in private payrolls of 650,000 in September. Employment gains were distributed throughout all industries and company sizes. However, unemployment still hovers at extreme highs.

In a separate report Wednesday, the Commerce Department said U.S. gross domestic product plunged at a 31.4% annualized rate in the second quarter, the steepest drop in economic output since the government started keeping records in 1947.

The U.S. Labor Department reported Thursday that another 837,000 individuals filed new jobless claims last week, lower than the revised 873,000 reported for the previous period. Initial claims appear to be stabilizing but at an elevated level, which indicates the labor market recovery is sputtering.

Much depends on consumers. Without confident consumers who have money in their pockets, there won’t be a sustained recovery.

Read This Story: A Question of Confidence

Stimulus talks have remained deadlocked since early August. Bitter political fighting between the two parties ahead of the November 3 election makes compromise unlikely (but not impossible). Treasury Secretary Steve Mnuchin said yesterday that both sides still want a deal, which cheered investors.

However, as of this writing Thursday, both sides are still far apart on stimulus. House Democrats abruptly postponed a planned vote Wednesday evening on their latest stimulus plan, delaying action until talks can proceed further. Massive employee furloughs in the airline industry are slated to start today, unless Congress approves more aid.

Failure to pass a relief bill would worsen the pain of the recession, especially for smaller companies. According to a new report by insurer Euler Hermes, the economic damage in terms of business bankruptcies will be even more acute in 2021. The number of insolvencies will rise the highest in the U.S., with a projected increase next year of 57% compared to levels in 2019 (see chart, released September 30 by research firm Statista): 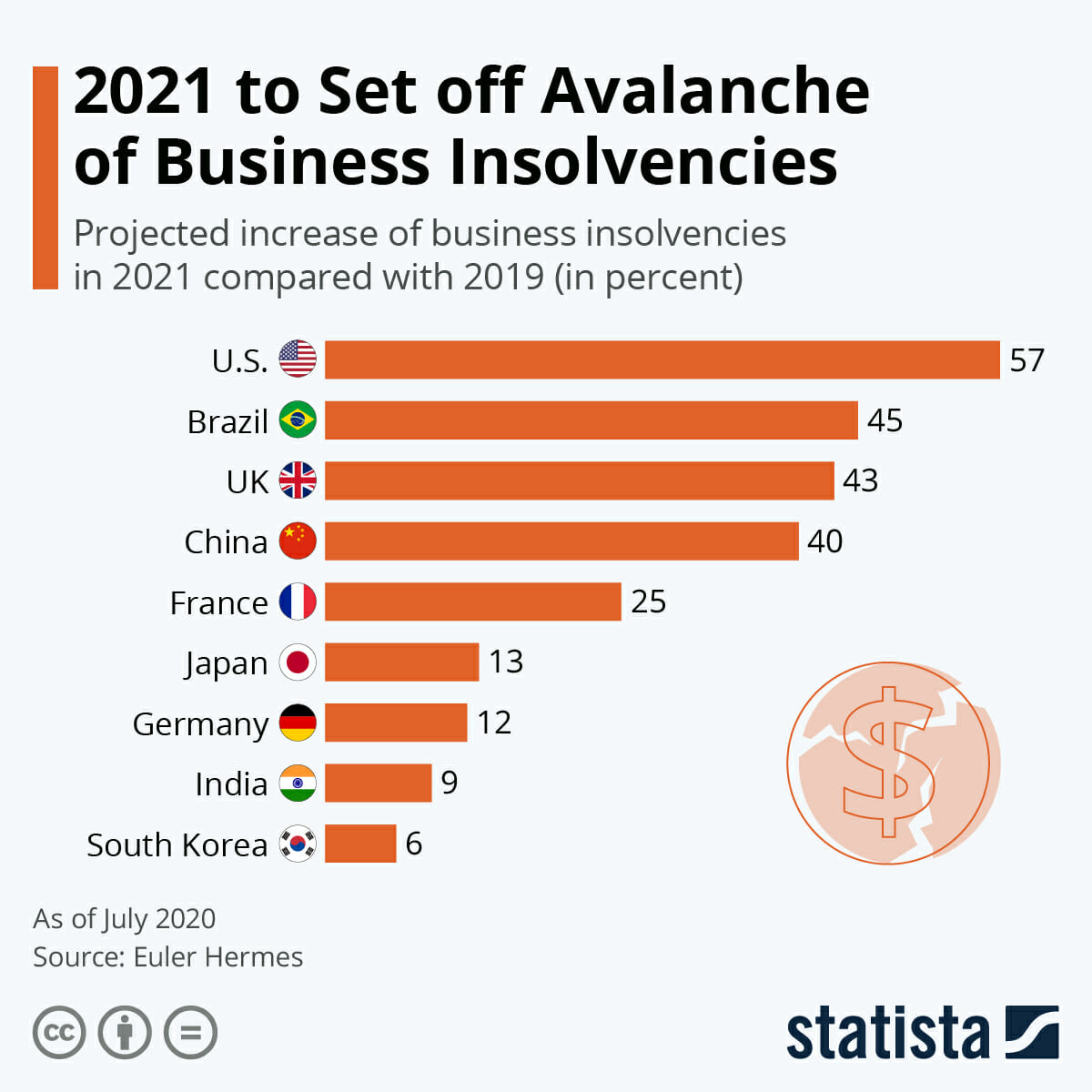 The coming wave of personal and business bankruptcies is likely to trigger another round of selling on Wall Street. We’ve witnessed irrevocable damage to many small businesses and high unemployment is likely to linger into next year.

What the bond market is trying to tell us…

Bond yields continue to scrape historic lows as the recession combined with aggressive central-bank buying maintains elevated demand for safe-haven assets. The 10-year Treasury yield currently hovers at 0.7%, far below the 6% level that government bonds were yielding in 2000.

Low bond yields are a highly visible indicator that investors are worried about economic growth in the U.S. and around the world. Investors tend to flee to ultra-safe government bonds during times of economic stress.

A sign of economic weakness is the Federal Reserve’s announcement on September 16 that the overnight rate would remain near zero through 2023. The Fed clearly thinks the economy faces long-term trouble. Given this backdrop, many stocks are still valued far too high.

Which brings me to my colleague Dr. Stephen Leeb, the chief investment strategist of The Complete Investor. Dr. Leeb has coined a term that explains the erratic behavior of the financial markets. He calls it “Reset 2020,” and he believes it signals a paradigm shift in how equities will be valued in the years to come. To learn more about this shift and how to profit from it, click here.