VIDEO: The October Surprise Is Here…and It’s a Doozy

Here’s my video presentation for Monday, October 5. The article below elaborates on my video and provides advice on how to steer a profitable course despite the dramatic turn of events.

We knew the final month leading up to the November presidential election would be wild. Sure enough, we got our October surprise and the world is gobsmacked.

President Trump last Friday was hospitalized after being diagnosed with the coronavirus. Trump was flown to Walter Reed National Military Medical Center where he underwent treatment with experimental antibody cocktails. These radical medical measures suggest the president has a severe case of COVID-19.

As of this writing Monday morning, Trump’s prognosis remains unclear amid contradictory messages from his physicians. The virus has spread through the White House and Congress, throwing the country into upheaval. According to news reports, the White House is nearly empty and aides aren’t sure what they’re supposed to be doing.

Wall Street hates uncertainty. But at least one thing is certain: the COVID-19 pandemic remains the central force in our lives. Until the virus is vanquished, investors must contend with volatility and the risk of a market implosion.

That said, stocks last week closed higher as investors placed their faith in passage of another fiscal stimulus bill. I’m mystified as to Wall Street’s optimism that a relief bill will eventually get through a bitterly divided, virus-stricken Congress. I formerly served as a congressional staffer and I’ve never seen worse conditions for getting major legislation passed.

Read This Story: Expert Q&A: How to Stay Calm When Volatility Strikes 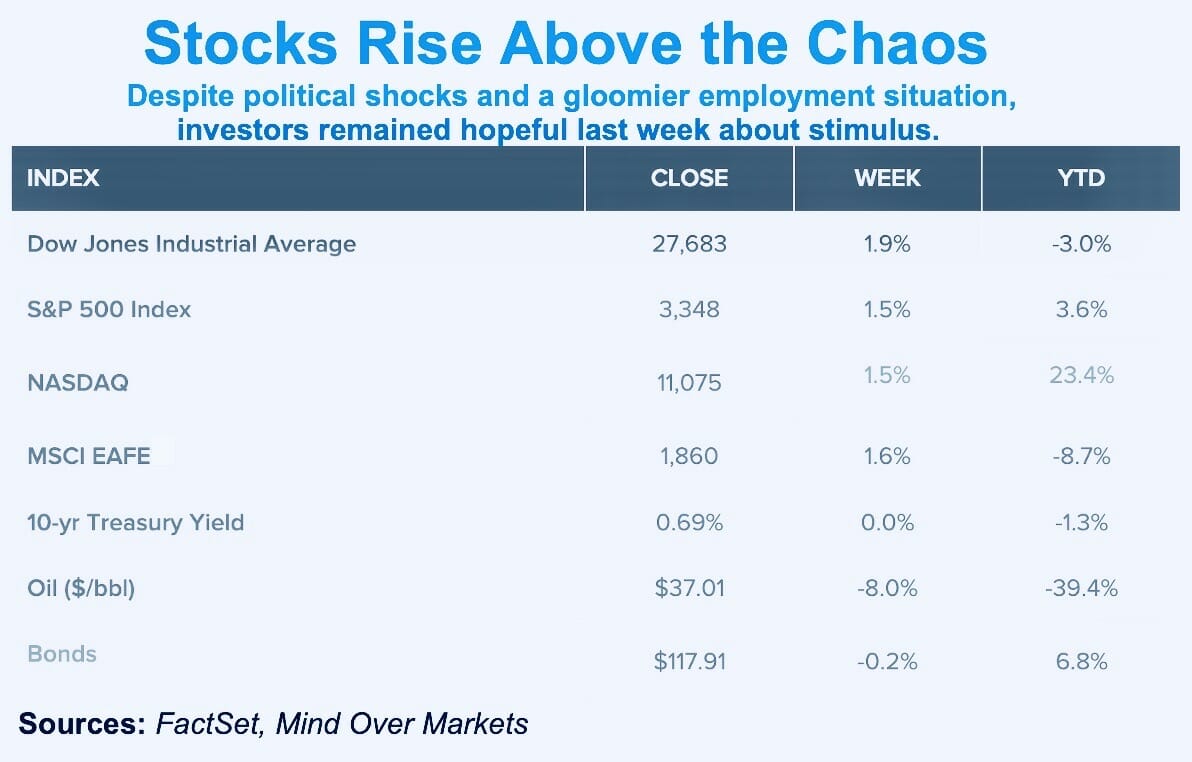 September brought substantial losses. For the month, the Dow declined 2.3%, the S&P 500 shed 3.9%, and the NASDAQ swooned 4.9%. Those are the worst monthly declines since the pandemic-era lows of March.

Regardless, the markets racked up a robust third quarter, which saw the Dow increase 7.6%, the S&P 500 rise 8.5%, and the NASDAQ climb 11%. Stock futures Monday morning were trading higher on stimulus hopes, which to me amounts to wishful thinking.

The Labor Department reported Friday that nonfarm payrolls rose by a lower than expected 661,000 in September and the unemployment rate was 7.9%. It was the final jobs report before the November election (see chart). 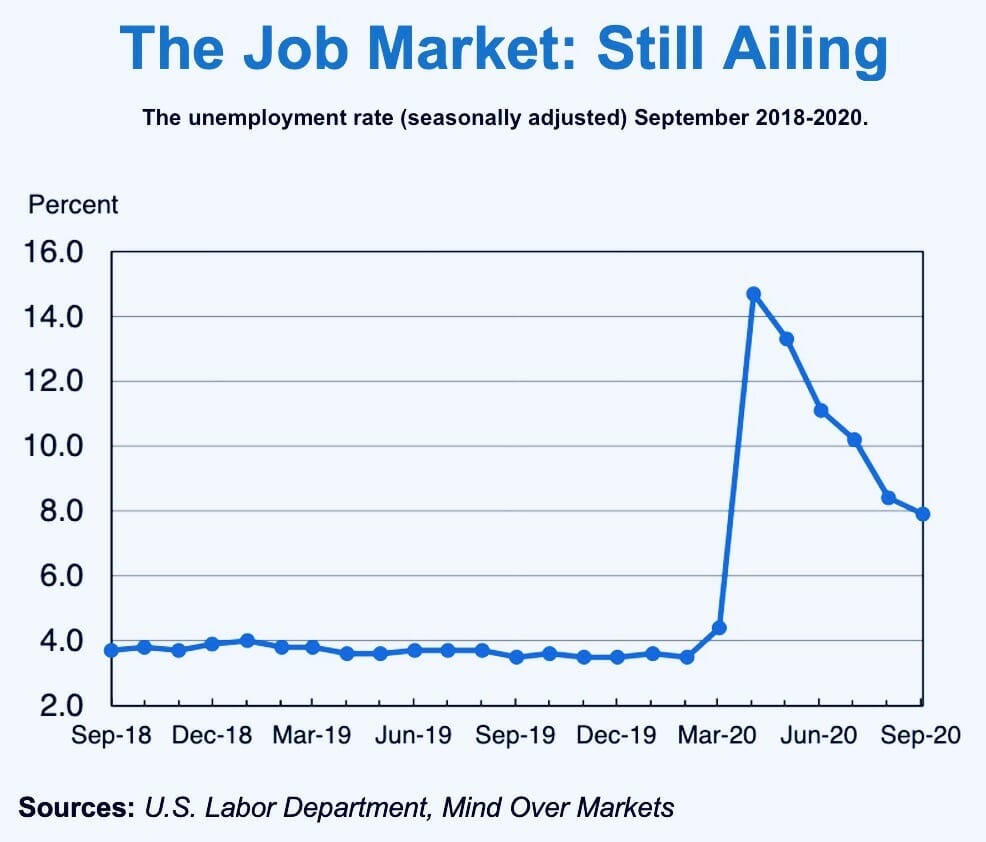 Labor force momentum is dissipating. The consensus of economists had expected a payrolls increase of 800,000 and the unemployment rate to fall to 8.2% from 8.4% in August.

The decline in the unemployment rate comes with a caveat: there was a 0.3 percentage point drop in the labor force participation rate to 61.4%, representing a decline of nearly 700,000.

When people leave the labor force, they are no longer counted as unemployed. In addition, a rising proportion of the unemployed report that their job losses are permanent.

The economy currently has about 11 million fewer jobs than it did before the coronavirus outbreak started to dominate the headlines in February, a larger loss than the 8.7 million at the nadir of the 2008-2009 Great Recession.

The slowdown in September was partly driven by public sector job losses, which will grow worse in the coming months. States and localities face budgetary crises and thousands of pink slips already are wending their way to teachers, firefighters, police officers, sanitation workers, and other public employees.

Meanwhile, the number of coronavirus cases worldwide is increasing, with the United States the hardest hit (see chart). 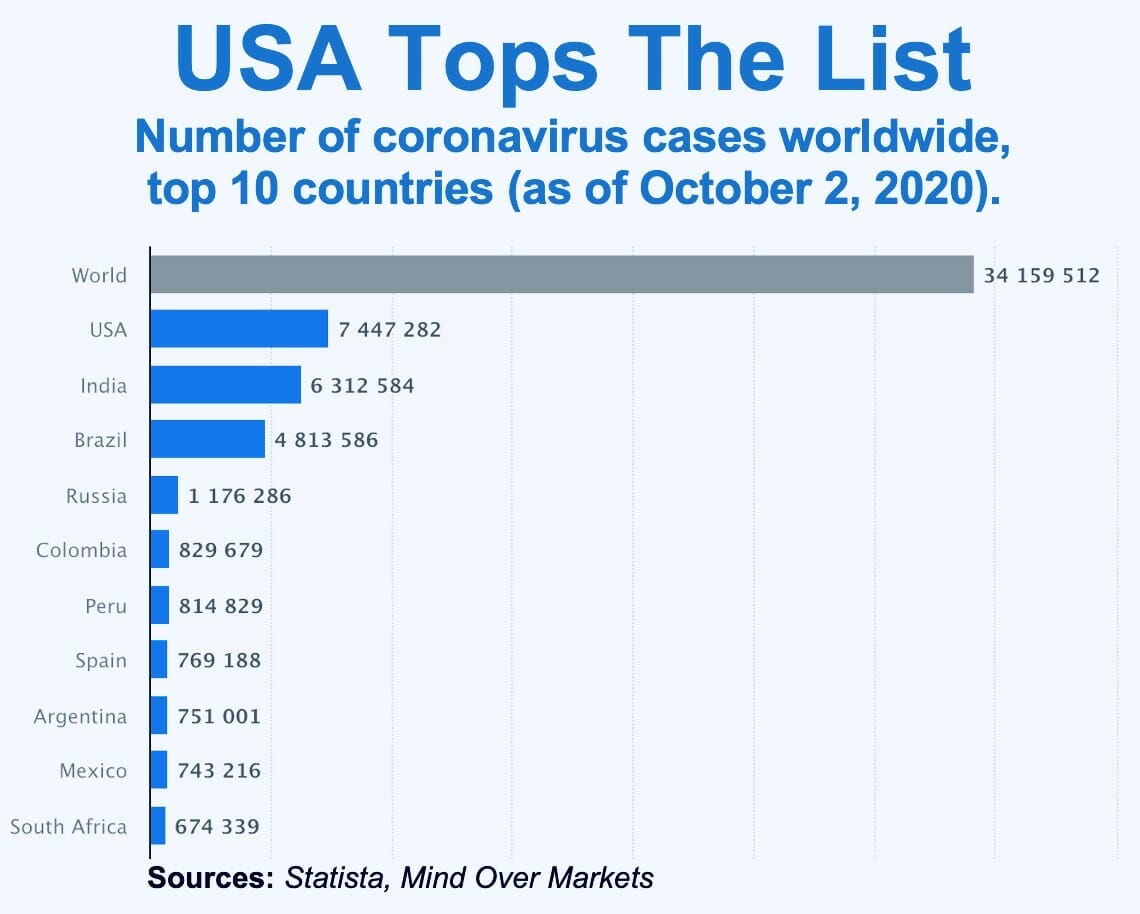 In the days leading up to last Friday’s hospitalization of the president, several pundits and politicos were confidently proclaiming that we had turned the corner on the pandemic. These same people mocked social distancing and mask wearing. Reality intruded with a vengeance on Friday, when Trump was medevaced to Walter Reed.

The pandemic isn’t over, not by a long shot. Cases are sharply rising throughout the country. Notably, New York City on Sunday imposed emergency restrictions in 20 neighborhoods, as a second wave of the coronavirus clobbers the country’s largest metropolis. The Midwest and Rocky Mountain region are witnessing sharp spikes in COVID cases.

With the pandemic again front and center in the news, consumers are likely to pull back on spending. About three-fourths of the U.S. economy is consumer spending, which means the economy and financial markets could face a rough winter. That said, consumers who still have jobs might be in the mood to satisfy their pent-up desire to spend money this holiday season, which in turn would benefit certain retail plays.

Read This Story: Betting On Retail

October probably isn’t through with surprises. If you’re nervous, I don’t blame you. But I would blame you if you abandoned the markets altogether. Remember, from the ashes of 2008-2009 arose the longest bull market in history.

Editor’s Note: My colleague Dr. Stephen Leeb is a veteran investment advisor who’s seen his share of surprises over the years. As the chief investment strategist of The Complete Investor, Dr. Leeb has safely navigated his followers through political upheaval, market crashes, financial crises, and recessions.

Dr. Leeb has coined a term that explains the current volatility of financial markets. He calls it “Reset 2020,” and he believes it signals a paradigm shift in how equities will be valued in the years to come. To learn more about this shift and how to profit from it, click here.