How to Profit From Stocks That Are Poised to Plummet

Consumer confidence is good for stocks when it is rising, as it did in April, May, and June. When consumers are feeling more confident about the economy, they tend to spend more money. But what happens when that optimism starts to drop?

The Consumer Confidence Index (CCI) fell in July and August to its lowest level in five months. In September, the S&P 500 Index dropped 10% as tech stocks quickly lost momentum. 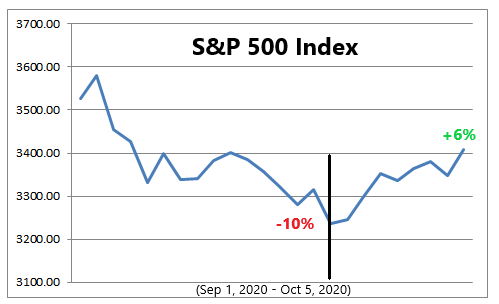 Since then, the stock market has rallied as consumer confidence went back on the rise. Over the past two weeks, the S&P 500 is up more than 6%. At the same time, the CCI recorded its largest monthly percentage gain in over a year.

There are many factors that influence consumer confidence, but the most important is job security. For millions of Americans, their job security is dependent on the direction of the coronavirus pandemic.

Consumer confidence is especially important during the rapidly approaching holiday gift-buying season. If you’re afraid you may not have a job much longer, you are likely to spend less and save more.

Last week, the Centers for Disease Control reported that three regions of the U.S. saw a rise in positive tests for the coronavirus. If that trend continues into other areas of the country, we may see an uptick in unemployment as businesses once again shut down to combat the virus.

By any conventional measure, the stock market is overvalued. The S&P 500 is currently priced at roughly 25 times forward earnings, a 60% premium to its 10-year average multiple of 15.

At the start of this month, the “Buffett Indicator” reached its highest level since the dot.com bubble 20 years ago. The Buffett Indicator compares the value of the U.S. stock market to the nation’s economic output as measured by gross domestic product. Shortly thereafter, the stock market crashed.

These days, no matter how bad the news, investors keep plowing more money into stocks. That may not necessarily be a reflection of how confident they feel about the economy. They may feel they have no choice.

A few months ago, I noted a surge in new retail accounts opened at online broker E*TRADE in March. That timing coincides with when the stock market bottomed out. Presumably, a lot of laid-off workers turned to day trading stocks to make ends meet.

That list reeks of desperation. It might have been a solid portfolio 40 years ago. Now, all of those companies are taking a beating due to the pandemic.

As I stated then: “I can’t help but wonder how much patience these new shareholders will have if the stock market goes through another V-shaped correction. Will they hang in there if a second wave of COVID-19 later this year once again shuts down the economy, or will they bail out?”

I think those shareholders are going to bail out, and soon. A second wave of COVID-19 this winter could send all five of those stocks into a tailspin.

To be sure, these five companies are among the more obvious examples of businesses that have been adversely impacted by the coronavirus pandemic. Their share prices already reflect their precarious plights. Betting on them to drop further may not offer much upside potential.

There are dozens of companies vulnerable to a second wave of COVID-19 this winter. However, their share prices do not yet reflect that risk and could plummet when their weaknesses are exposed.

You can make a lot of money by correctly identifying a stock that is about to fall. It isn’t hard to do and does not require anything that you don’t already have. All you need is a standard brokerage account and a few minutes each week to place your trades.

I’ve put together a free tutorial that explains everything you need to know to make a lot of money this way over the next few months. To get started, CLICK HERE.